There is enchantment in the light.

Two lighthouse keepers try to maintain their sanity while living on a remote and mysterious New England island in the 1890s.
20191 h 50 min
Click an icon to see more 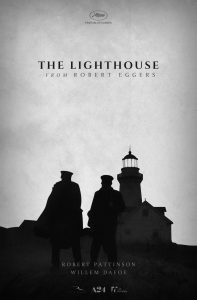 “Her cunt gripped him like a warm, friendly hand.
It’s alright, all your friends are here
When can I meet them?
After you’ve eaten
I’m not hungry
Uh, we meant beaten
Silver stream, silvery cream
Oooooh, impossible concentration.” – The Movie; An American Prayer by Jim Morrison

“Please leave us here – Close our eyes to the octopus ride” – Octopus: The Best of Syd Barrett, 1992 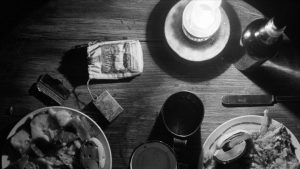 A steamboat is seen approaching land, through dense, gloomy confining valley fog. The sputtering sound it makes by splitting the sea, its bow and hull making way forward; takes up all the space, soon to be replaced by the choking shriek of the seagulls, mixed with the repeated low, loud noise from the foghorn, resonating, reverberating, calm but resilient blaring of a weak hungry animal, which was once mighty and enduring. This foghorn is prone to misfiring, causing the horn to sound continuously in clear weather also (as the movie progresses) followed by the sound of men walking, an indistinct chatter, the bump of a human head making contact with low ceiling clearance and then the strike of a match against the wall (just like how it was in Joker, 2019) and then the pounding rain; as if mother nature is preparing for the storm of the century. 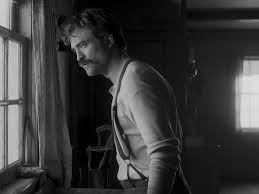 Eggers’ stylized – replete with imperious soaring shadows, which stalk the duo – nightmare/dreamscape is a calculatedly (notice how each takes turns at the meal table, to eat. If Wake is eating, Winslow isn’t and vice versa) misbegotten, jarring, exquisite travelogue through Hell itself (Hell disguised as a rock), accompanied by a jittery, muffled soundtrack of caterwauling sounds (by Mark Korven) of souls doomed to oblivion. 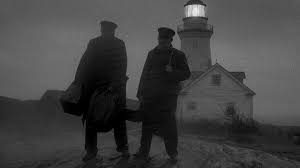 Then comes the almost one minute long (Sergio Leone style) stare in to the camera, where Pattinson is shown to look away at the gulls for just a moment (as if he’s caught a glimpse of something never seen before), he squints, and his eyes are then back to facing the camera. All of it is shot intricately and amorously with narrow, vintage aspect ratio.
Dafoe inserts a pipe upside down, in his mouth and walks away, with his head high. The film is completely devoid of dialogue or expression during the first seven minutes, until the silence is broken by show of authority. 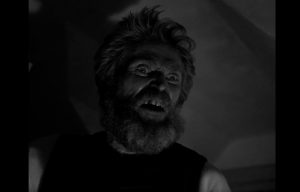 When Thomas Wake (a sublime casting of Willem Dafoe) strikes, with his right hand, the side of Ephraim Winslow‘s face and also the good sense (among other matters of sagacity) out of Robert Pattinson; in a performance of a lifetime, physically demanding (and boy does he augur the expectations beyond just well or what? Taking the spiral stairs all the way up and down to the beacon), sitting on a prehistoric chair and eating a meal from an even more antique table, situated within the taut confines of the gothic, execrable, silvery, hideous edifice that is the Lighthouse, we witness seething shock and unimaginable stupor on the face of “The Batman” (to be); with his right hand touching the side of the face that was thunderstruck by the seafarer’s harsh and strong hand. It is as if the “slap” was unscripted and so was the befouled water that Winslow drinks and immediately spits out, counteracting the odium with pristine repulsion. 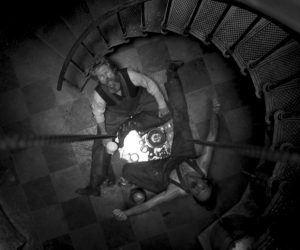 “[Sic] it is bad luck to kill a gull – In them’s the souls of sailors what met their maker.” Wake thinks out loud while slowly chewing his food and also breaking wind, all along the camera focuses on his bearded and weathered, aged (yet strangely familiar) face captured by the camera placed just under his chin, the shadows make him look like Zarathustra revealing one divine secret after another. 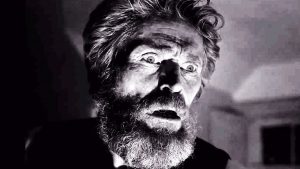 Jesus of Nazareth is in full form here, from the bluejacket, bloater dialogue delivery; the seaman’s tongue, to his rugged mannerism; limping and whistling and barking one monologue of an order after another: “If I tell you to clean every nail that is sticking out of the walls of the entire lighthouse from top to bottom, until it shines like a whale’s wiener and then do it all over again and then again, you will do it!”
Dafoe has been an underdog for the longest time and one sight of dirt entering his mouth and him trying to first spit it out and then finally giving in and grinding the sand with his bad teeth will show/tell differently. 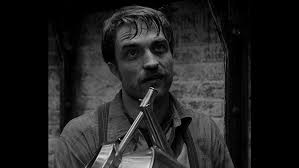 “… He (Wake’s previous partner) notioned that St. Elmo had cast his very fire into it. Salvation, said he”. Wake is shown to be more than just obsessed with the beacon (The Fresnel lens) at the top of the tower, the guiding light, the light to help sailors navigate. Or the light, a structure with the shape of an eye, (like the Eye of Sauron) that consumes everything that shapes and molds a man, the existential truth is all distorted at the slightest touch, resulting in distorted, muffled screams of what could be agony or pure orgasmic ecstasy. There is no way to tell. 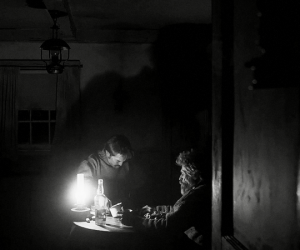 The film also harbors dark humor, physical comedy, the Commedia dell’arte, some real wacky slapstick, with Eggers paying a diminutive (but present nonetheless) homage to Buster Keaton and his films; specially One week, 1920 andThe Navigator, 1924 as he shows Winslow suddenly emerging out of a horizontal pipe and reaching for the wrench. It reminded this pilgrim so much of the silent films where the camera was hand cranked. The only form of speed regulation was the cameraman going “one one thousand, two one thousand” as he rotated the handle. As a result, there wasn’t any such thing as a standard silent (film) speed. 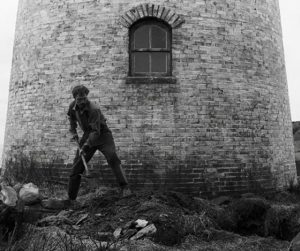 “But I can’t be dragging me old stump about. Nay, not worth the trouble. Now, I’m a wickie, and a wickie I is. And I’m damn-well wedded to this here light, and she’s been a finer, truer, quieter, wife than any a live-blooded woman.” Says Wake to the character of Winslow, who, it is revealed later, is a drifter, even maybe running from the law and the poor soul just entered Dante’s Purgatorio from The Divine Comedy, after having lived in the Paradiso (for a little bit) and setting bivouac here eternally after having tasted the Inferno and from the looks of it, defeated by it and being reduced to half a man (but the handle-bar stays and this time I hope they simply shave it than use CGI); it is all inverted in this wretched, godforsaken, a metaphysical splatter of a tower, which is very real. 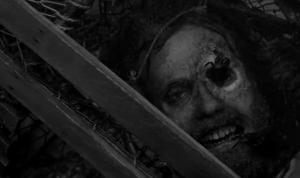 “The Lighthouse” is hard to consume on many levels; although in that consumption is also a smattering of brilliance, of which we saw just more than a glimpse in the director’s last venture (in to the stygian forest), “The VVitch, 2016”, from which we can trace the director’s influences of making films that are entrancing, obsessive, disturbing, cerebral, profound, masterful and most likely indelible.
The film, it seems was deliberately arranged to appear as part of a mythology, with the dream sequences and specially the beacon of (not hope but) isolation, confining two men to a ramshackle structure and the well-built tower. Well, turns out that things are only warming up, not even letting the two men stretch a little. For you see, even when they’re asleep, they’re tossing and turning and getting vividly realistic, chromatic nightmares, which rattle them awake, well; more with Winslow than Thomas Wake. 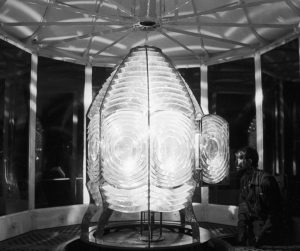 The divergent duo have put in all it takes for a performance to not just be good but ethereal and most convincing. Pattinson looks as if he belongs here, right next to the grumpy but austere and an aging Sgt. Elias as the elderly lighthouse keeper, he (Batsy) also looks as if he has been shown the method to the madness and has somehow embraced it with a certain filial piety – I hear they are comparing his performance to Daniel Day-Lewis in There will be Blood, 2008. It all smells of Begotten, 1990 by E. Elias Merhige. And that is not a pleasant association, but then Eggers never intended for his film to be pleasant, quite the contrary, I says.

Severe, astringent, The Lighthouse is a period piece where the actors speak in various periodic dialects and are filmed using a hundred years old filming techniques, enriched and adorned with period-accurate dialogue, the estranged film gets under the skin and stays there for a long time. It also feels as if Antonin Artaud and Friedrich Nietzsche were major influences on The Lighthouse, also the German Expressionist film The Cabinet of Dr. Caligari, 1920 and even more closely, the mad and maddening, Green Elephant, 1999 a Russian grindhouse, with a history of illness and disease and downright crazy. Goodness. 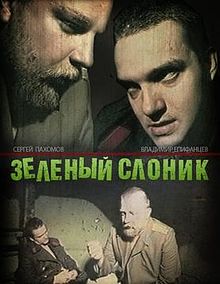 The audience is further alienated (even more than perhaps Pattinson) at the sight of an isolated shot of two men, standing on a raised rock, as mother nature unleashes her wrath unto them (if they were to walk away it would stop) as rain pours down with unforgiving, relentless fury, waiting for the ferry to arrive, to pick them and get them to mainland. But we all know since Shutter Island, 2010 that ferries do not return and that the jarring ride was a one way voyage, a passing into hell, from where there is no return; only seagulls and men holding them by the neck and hitting them against a hard surface repeatedly, until the bird is more than just dead. 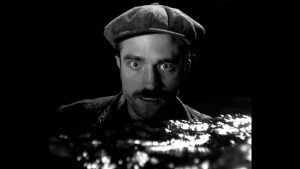 Robert Eggers scared us witless and also brain fucked with us, by making the evil and nefarious Witch, yet shot with just enough aesthetics to convince the viewers of a Billy goat named Phillips, whispering into the ears of the family consigned to fate worse than that of Harry Angel, from Angel Heart, not that Rourke got it easy but he did try and put up a fight with the devil himself. 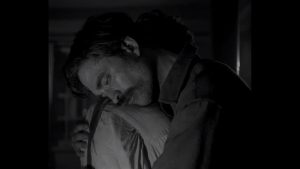 Get locked into the fever and let Eggers take your hand and make you take a tour of Hell and by the end, the birds pecking at the still young Master Wayne‘s eyes (and then some) will not hurt as much as it would have, had we not taken the tour. 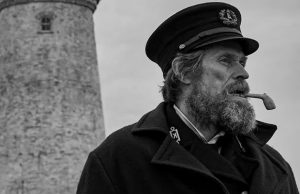 Brilliantly deranged and made with a certain frenzy of sorts, and also a must watch.