What would you do if you knew you couldn't be seen?

Cocky researcher, Sebastian Caine is working on a project to make living creatures invisible and he's so confident he's found the right formula that he tests it on himself and soon begins to vanish. The only problem is – no-one can determine how to make him visible again. Caine's predicament eventually drives him mad, with terrifying results.
20001 h 52 min
Click an icon to see more 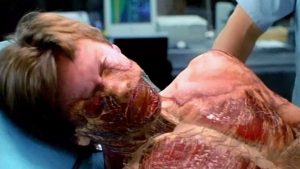 Tagline to Hollow Man: What would you do if you knew you couldn’t be seen?
Me: You mean you can see me?

I love this see-through film.

Thirteen years ago, before Hollow Man, Paul Verhoeven made the dark, ultra-violent, offbeat and Bohemian, quick-witted, Robocop, 1987; the brilliant singularity and idiosyncrasy of Verhoeven’s direction and the synthetic yet humane screenplay pleased Orion Pictures and 20th Century Fox and movie-goers, mainly for using ingenious satire to compensate for the X-Rated violence. The film was hailed by many as the best film of 1987, which is a bombastic statement keeping in mind that Angel Heart, Untouchables, Lethal Weapon, Raising Arizona, Full Metal Jacket and Predator among others were released the same year. However the statement goes a long way in describing the sinful pull of Robocop, one of the finest films ever made. 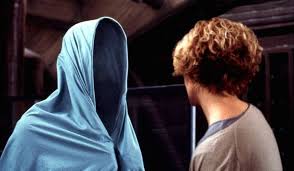 Then, in 1992, Sharon Stone crossed her legs in front of three detectives and a shocked world. The rest is history, even the ice pick. You get the idea. Paul Verhoeven has a naughty side (also evident in Robocop), most evident in the ill-fated and menstrual, Show Girls, 1995.

After the polarized reception of the contentious and multi-layered Starship Troopers, 1997, the director it seemed was getting disenchanted but he would not leave on a low note. He would not even leave (thankfully) on a even lower note; Verhoeven’s sardonic, wry, violent and psychological, Hollow Man.
Verhoeven hates the film and calls it the film that he should not have made. Does that change anything? No.

Scientist Sebastian Caine (Kevin Bacon) develops a serum and an obsession; and with the help of a team of scientists, succeeds in making a gorilla invisible and also in making it visible again by injecting the magic potion into the lab rat…err, lab King Kong.
Next thing we know Sebastian manages to convince his team to jump to human testing at once. A million films have borrowed that format; skip the preliminary tests and stick the fucking needle into a human being – and then shit hits the freezer-store room fan or air ducts. 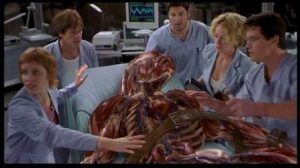 Filmed mostly in bright colours, the blue and white of the laboratory sets completely disagree with Sebastian’s menacing, manic and imperil state of mind, once things go wrong, awfully wrong; an invisible hand copping a feel while Sarah Kennedy (Kim Dickens) is taking a power nap. That is one my all time guilty pleasure scenes. Fuck guilty, I love that bloody scene. However less than the transformation and the grand FX that explores the human anatomy in such detail that it convinces the audience that shit like this could happen in near future. Plus it also convinced the Academy to nominate Hollow Man in the best FX category.
It lost to Gladiator; but of course. 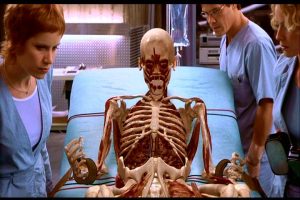 The unbearable lightness of being

With a simple story, an even simple screenplay and half-hearted direction, the film is left for the actors to drive it. Josh Brolin and Elisabeth Shue (sigh) are alright – I fail to understand the wide-eyed reaction to everything from Shue, it gets irritating after a while. 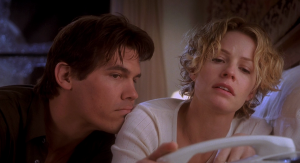 A titular Dr, Jekyll and Mr. Hyde parable disguised as a modern sci-fi/slasher, Hollow Man has its moments. One of them being Kevin Bacon and that tilted, dimpled smile of his when he is thinking of dressing like Rorschach from The Watchmen and paying the sexy neighbour a visit. 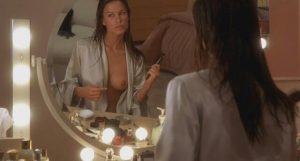 As the movie progresses, all characters either get confused, panicked, become counselors, get killed before slipping on their own blood. Yummy. All except Sebastian Shaw, I mean Sebastian Caine, whose mind becomes even more sinister and filled with blood lust and hyper-sexuality, ha.

As I said, with a simple story and superior special effects (even for 2018) the film may have bombed but not where I camp. I actually liked it a lot. Plus the Verhoeven POV works like a charm in this ill-fated turkey, bringing one of man’s fantastical dreams of becoming invisible for the sake of entering a ladies shower room without any fake screaming. The camera implicates us as voyeurs, and some of us like it. I mean I love to watch films. 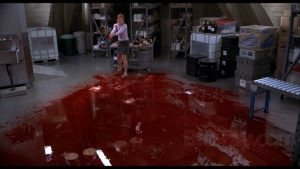 This American/German collaboration may have bombed big time (although earning twice as much as it was made for) but it has a great cult following; myself being part of the cult of the Hollow Man and Six Degrees of Kevin Bacon (not the parlour game). 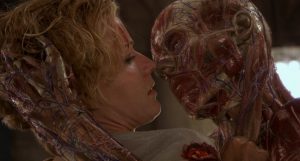 “You don’t make history by following the rules, you make it by seizing the moment.” – Sebastian Caine

“Ladies, please, this is science.” Sebastian to Linda and Sarah reacting to an exposed Bacon. 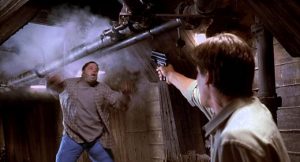 Gotta shoot at something, anything; shoot the film and then shoot it away again

H. G. Wells would have been highly amused.