You Cannot Contain What You Are

In a series of escalating encounters, security guard David Dunn uses his supernatural abilities to track Kevin Wendell Crumb, a disturbed man who has twenty-four personalities. Meanwhile, the shadowy presence of Elijah Price emerges as an orchestrator who holds secrets critical to both men.
20192 h 09 min
Click an icon to see more 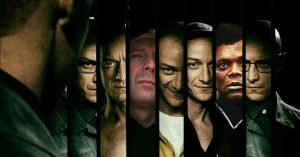 Now, this is all coming from someone who did not give up on Shyamalan (as Jai, the security guard from Dr. Fletcher‘s apartment building in Split, 2017 buying a home security camera from the Dunn Security store as there have been two murders in the neighborhood), the king of hits and misses and mega-misses; in all these years after the fateful Lady in the Water, 2006, which I haven’t had the encouragement to watch. 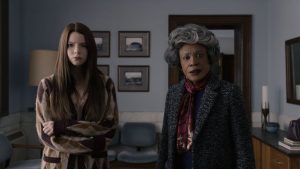 Nonetheless, how does this pilgrim rationalize the feverish yarn spinning of Shyamalan’s own, minuscule (in comparison) pop cultural norm of underwhelming consequences? How does one come to terms with the sudden compression of The Beast itself? The imaginarium build-up was such and it has been such since 1999, when the world was simpler, it wasn’t as deflating, withdrawn as most web-handles have made it in the year of the Lord, 2019? When was the last time a director made an impact of such proportions that would blow the senses away, shred pre-conceived notion of the prodigious, alien culture, to rags? Let me answer that; first time it was in 2016 with the highly prodigal and truly frightening The VVitch by Robert Eggers, a film that elevated the horror genre all by itself, like Superman and that green VW Beetle on the cover of Action Comics # 1 (1938) – and then again in late 2017, when Ari Aster bombarded our subtlety, erudition and discernment with his highly charged and shocking film, Hereditary 2018. 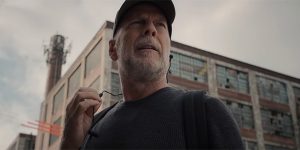 As Glass began, things were unraveling fast (too fast) for a project that the viewers know will end in a twist; big or small, insignificant or not; but a twist nonetheless. The Sixth Sense, 1999 rather unfortunately set the bar too high for the filmmaker himself and he has been trying to vanquish his own laboring expectations since, by any means possible; take the wind in The Happening, 2008 for instance – anything that would intrigue the audience, if not like how The Sixth Sense, 1999 did, but something, anything, to make the viewers like his films again. He probably did not know that the plot trappings of The Happening were way ahead of its time, and Bird Box, 2018 proves the fact. 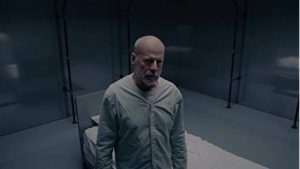 Underwhelming – that word was making rounds in my head as I watched, with a sense of forced urgency, the film unveiling itself by pitting very early in the film what was supposed to be pitted against each other as the final pay-off; that was the first time Shyamalan caught me completely off guard with Katherine (the High Priestess) and David, the nine year old and cognizant of the twenty four, already having a conversation with a bunch of bound and gagged (well maybe not gagged) cheerleaders. And then again, watching a child’s face on a grown man impairing the environment with disorientation (Joseph Dunn, The Green Cloak, The Overseer‘s son and partner in vigilantism) and the trouble the authority goes through to contain them in their all white rooms. It was all too soon, as mentioned before, the unfolding was happening at a pace that a certain frame of mind, or a determined mind-set would otherwise process with imprecise signals hitting the neurons at seventy miles an hour. 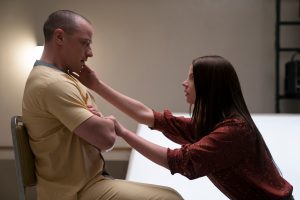 “First name Mister, second name (turns his head a little more) Glass“; for someone who has his name as the title of the film, Jackson is introduced comparatively late in the film, and pretty malleable at that. We have not seen Jackson this docile since, perhaps, after he got shot in the gut in “The H8teful, 2015″. Even then he was yelling and spewing profanity all over the bloody cabin in the middle of snowy nowhere. 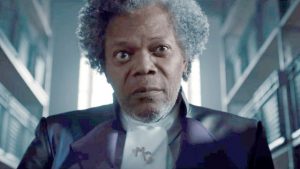 This film is neither an imminent flaming air craft in a perpetual career nose dive, nor does it come full circle in the pompous (fervent) stitching of a pulp-mythos, in a way that would distant the keen viewer even if it was for the unique, unnerving and powerful disease, frog leaping its way across the grassy knoll, to its victim. Rationale, reason, faith is charging towards its prey in a way a predator would; a predator in need. Now, that is some impressive stunt work and the brash, bold, heartbreaking and brilliant physicality of James McAvoy, which once again brings the much needed tail bone intrigue and entertainment value/distraction (from the rest of the plot) to the 129 minutes of this hurried venture, adds to what Shyamalan keeps low key, despite the shattering-mirrors marketing and efforts to maintain the laws of a traversing the (fleeting) three-part film progress. 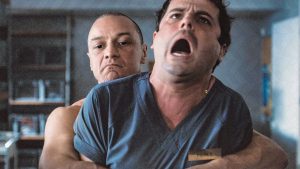 Hartigan aging – the first time I laid my eyes on David Dunn the thought that flashed by was, “man, John McCLane has aged“. And then they flashed a scene from the past and I could almost imagine hearing, “yippee-ki-yay, motherfucker!“. Well, this is notwithstanding the other voices that also sometimes speak up; The Horde, that is what the press calls it in the film. 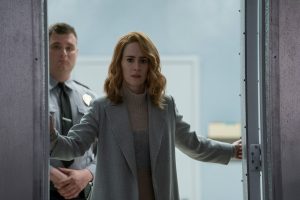 In this candy-clasmatic, almost genocidal age of film, Glass comes across as something that leaves you high and dry, almost inconclusive, irresolute, and something to get the winning streak back for director M. Knight Shyamalan. It seems rushed, although the first few transformations by Professor Charles Xavier are no less than highly impressive, specially the part in the catacombs, where he speaks like Venom, not Tom Hardy as Venom but a stand alone Venom. Plus, there’s too much discordance in the philosophy of Glass to simply under rug sweep and let the better parts shine. For if we let something of the sort happen, it will only take us to a level of which Mr. Glass himself speaks with trepidation and something that is absolutely unacceptable to the character; pedestrian – no, The Beast may have learned to climb and slither and maneuver through the vertical surfaces and crawl on the roof and what have you, by watching YouTube videos of wall climbers, it doesn’t mean that the mastermind scheming of advancing the plot be corroded, not a chance and this is one of the reasons that the credo of Glass is on a direct collision course with audiences waiting for Thanos to return.

Sentiments run rampant and so do the seemingly specialized branch of the Philadelphia Police Department, led by Dr. Ellie Staple (the doe-eyed Sarah Paulson looking straight into the eyes of The Hero, The Villain and the Villain’s Hold ’em, trying to convince them that this is all just a motherfucking dream).

The twist, as mild and as nonsensical as they come, starts off as a pre-ceremony for unveiling a statue of Baphomet, but the Knight Templar come across as meek and fans of the Batman v Superman: Dawn of Justice, 2016 lore, a belief that a majority of placards waiving crowd holds. The recent flash flood of super-hero themed films may have to do with the fact that even though the director may seem to be back in form with Glass, he seems (or it seems to our collective psyche) rather preoccupied with regaining lost glory by, say, revisiting material that hinted at a glimmer of hope for the director, who is up against a phenomena of tremendous magnitude and proportions. 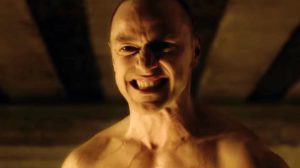 This is a a trilogy where a trilogy was unwarranted and unnecessary but a drowning man will grasp at anything to keep himself from drowning or being consigned to oblivion if he doesn’t hold on to that debris. The other option would be to bring home familiar people, dressed in purple and green and sometimes bare chested – with veins popping out of the neck and chest area – in to a room whose door was left open for way too long.