In 1905, a man travels to a remote island in search of his missing sister who has been kidnapped by a mysterious religious cult.
20182 h 10 min
Click an icon to see more 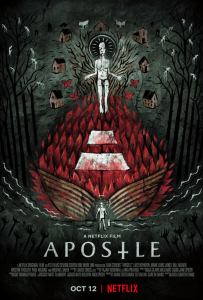 The film, although masterfully crafted by Gareth Evans (a fantastic action director), and simultaneously paying a diminutive homage to The Wicker Man, 1973, is missing the sheen of a period piece, even if the language is ancient (not as terrifyingly ancient as perhaps, The VVitch, 2015) but it does serve the atmosphere that a film like Apostle warrants, but only as much, for you see Police Sergeant Neil Howie (the name of the cult leader is Malcolm Howie, played by the immensely talented Michael Sheen), I mean Policeman Edward Malus from the bee-movie re-make, I mean a former Christian missionary and a perpetually wide-eyed Thomas Richardson (Dan Stevens), it seems is unable to blink, his eyes moving from one object of interest to another object of desire to a straight razor in one long unflinching take, seemingly not moved or touched by the highly desirous and mischievous (for Camp Mother Nature) Andrea Howe (Lucy Boynton), the daughter of the cult leader. The performances are praiseworthy when the actors know where to turn or who to turn to. 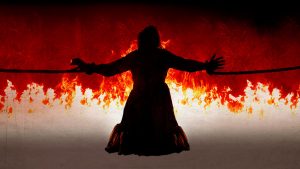 What is Jack from “The House that he Build” doing here?

What it favorably does, however, is present to us the brutality of it all as a matter of sordid fact, by much bloodletting and it goes a little further and surprises us with the horror of slow burn. Even though the performance of Dan Stevens  has been praised in some circles, as we witness the slow but sure descent of the communal psyche in to a deep dark hole that Poison Ivy (of Batman fame in a Folk Horror film) seemingly dug, prior to the arrival of the bunch of men and women to the secluded island, run by three convicts who, we are told escaped death and the authorities on mainland England, for treason. There is even a communion where Sheen quotes from a book written by himself as the self-professed prophet; all charged and ready to screw anyone who even as much as harbors any thought of putting an end to the ongoing madness under the guise of a new religion. It all plays out like genre films where a cult leader is misleading his followers the Kool Aid way, where the aviators from RayBan are king and Jim Jones a very bad person. 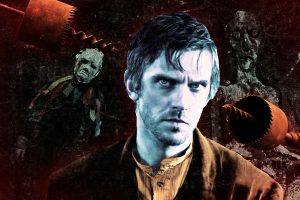 Having said all that, the film is horrifying when it wants to be such, when Richardson finally blinks, when the daughter of one of the escapees (and now a high ranking functionary) wants her man (a kid) to build them a house out of the small boat where they have sex in secret.
Even though not very heavy on film acumen, Apostle does get strange and graphic when the earth becomes barren and the livestock keeps giving birth to male lambkin, a male baby goat that goes in to the waste bucket straight outta the womb. All of it making the film more disturbing than one would have thought.

However, with Evan’s changing gears from fast paced, impeccably timed action and highly effective gun-fu sequences, to helming a British-American period horror film (the events depicted in the film are contained within a year; 1905), is a little hard to digest, I kept thinking the director was Gareth Edwards and that made me looking out for monsters very early in the film when I paused it and re-checked the name of Gareth Evans (He’s the gent who directed The Raid: Redemption, 2014, I thought to myself and then continued to watch with a whole new, unassociated state of mind). 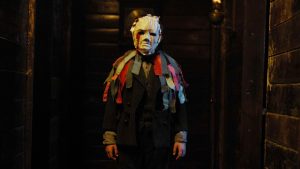 I do not mean to belittle Evan’s effort as a horror director; he has been there before with Footsteps, 2006 and even directing a segment in the the 2013 anthology follow up, VHS II; segment Safe Haven, however watching his actors trying (even perhaps very hard) to make some sense; put method to the muddled, bollix state of affairs, put this pilgrim on a tangent of sorts. It looks as if too much is going on and at one time in the film this sinner-man had to rewind (how 80’s) just to check if I was witnessing a flashback or somehow Malcolm had recovered from the shot gun impact within seconds. My own assumptions got the better of me at this instance, when I figured the ending about fifteen minutes earlier. At the time I was almost disappointed that it wasn’t the the way it was to become fifteen minutes later. If that makes any sense. Cave drawing ala “Prometheus, 2012” style minus the “tall creatures” pointing to a Ridley Scott/Giger heaven/hell

Graciously bloody and surprisingly violent for a Netflix release, Evan’s signature can be clearly seen in places where the violence begins and establishes itself as an important trait of Apostle; much like Braveheart, 1995 as far as the torture contraptions go. Speaking of which, Evans painstakingly recreated the contrivances by researching the torture techniques of the middle ages, and the production crew does a fantastic job of creating the menacing, rusting contraptions used in the film for those who do not comply, for many moons and some astronomical dawning. 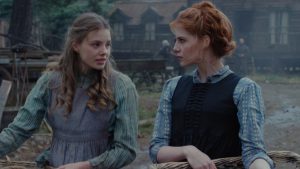 In the end the mettlesome techniques of the action director can be found if looked at closely. The reputation of Evans is intact by coming full circle, after the thirty minute mark when the (island) authorities get suspicious and later when Richardson loses a finger or three while in a confrontation with Rope Face or as the film would like to call it, The Grinder (Sebastian McCheyne); an entity that looks like it walked in to the set of Apostle directly from Silent Hill. 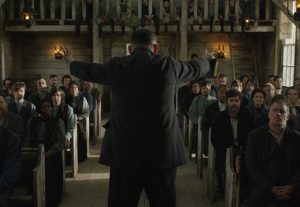 A slow-paced British-American period horror film, Apostle, written and directed by Evan’s rises at times but only as much and yes, when it does it has the keen viewers’ full attention, specially when a lobotomy is being performed and the POV shown is that of the victim with the camera filling with blood from the sides as the mean looking rustic bore, drill makes its way into poor Jeremy‘s (Bill Milner) shaven scalp and into the gray matter through the gaping hole in the young lad’s skull.

Atmospheric (just enough), absorbing (at times), revolting (when the torture devices are taken out) and disturbing in the way the allegory of the sheep and the fox has been treated and brought to film life by the master of action himself. 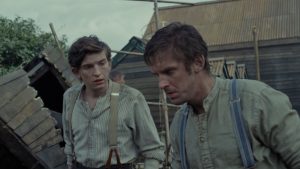 Note: It is most disturbing to watch an innocent man being punished for crimes he did not commit and that too with the camera lens becoming red and then fading to black when the victim breaths his last. It was like watching a footage from a drone where a settlement is disseminated and the colors are inverted, making the impact and bloodletting appear blue and a pale yellow; deceiving and with way less impact. 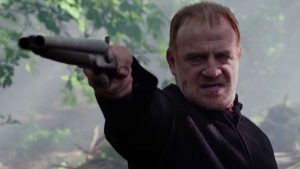 Watch it for Michael Sheen and Evan‘s turn to hardcore Jugface demesne.