The pit wants what it wants

The pit has spoken. Dawai, the potter of a backwoods community, has crafted a face on a ceramic jug of the person that the pit wants sacrificed. Ada, pregnant with her brother’s child, has seen her face on the jug and hides it in the woods, determined to save the life of her unborn. If she does not sacrifice herself however, the creature from the pit will kill everyone in the village until she does.
20131 h 21 min
Click an icon to see more 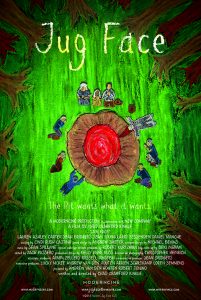 When I went in to watch Jug Face the only things I knew about the film was that it was a horror with a poster that grabs you by the balls, for a few seconds – it’s lovely, the poster. The film is a strange brew of horror moonshine and a downward spiral. It is an extremely well-made film with convincing acting to augment the almost real feel Jug Face, despite its extremely surreal premise. The worst part, this kinda shit actually happens sans the bogey man. 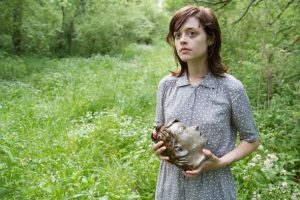 This is horror being re-defined in various forms and shape; all the forms and shapes being human or human with lots of blue make up and a halo around him. The crickets, the sound they make adds volumes. You’ll see.

He can’t, but you will

The lead, Ada (Lauren Ashley Carter) is lovely to watch, except when the visions happen, and Carter is quite daring in this one. The opening sequence is rather enticing.

Dawai (Sean Bridges) kept reminding of Will Ferrell, however that was soon gone and the potter had my full attention. 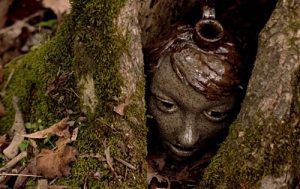 The film shows you something. Something that you’ll have to figure on your own. Yup, it’s that kind of a cult classic, in the making; five years down the road and it’s still WIP.

Must watch, and not just for the horror fans. The squeamish can always use the forward option (yikes). And really, if you come to think of it, there is barely anything to be squeamish about unless white pupils scare you.

Of unrecognisable reflections in the pond