Someone answered your call.

Madrid, 1990s. After making a Ouija with friends, a teenager is besieged by dangerous supernatural presences that threaten to harm her whole family. Inspired by terrifying police files never solved.
20171 h 45 min
Click an icon to see more

“Daddy, whatd’ja leave behind for me?” – Pink Floyd; Another Brick in the Wall 1

Mirror.co.uk, nme.com, The Sun, amongst others just can’t stop raving about the brutality of Veronica; going to the extent of asking this: “is Veronica the scariest film ever?” and stating, “new horror film dubbed scariest ever”; it doesn’t stop there, the film also managed to garner a 100% fresh rating on Rotten Tomatoes, a feat virtually impossible for a genre not taken seriously except when it is scaring the good sense out of the viewers. Even then, for a film to be compared with other hand-to-heart horror outings like The Exorcist, 1973 and The Conjuring, 2013 in these hard to handle times is something that director Paco Plaza (Rec., 2007) should be extremely proud of.

“And people have taken to Twitter to warn fellow users about their nail-biting viewing experience”, cautions NME in a article published on, March 2, 2018.

Seriously? Have they not watched The Room, 2003? That is obviously a joke in the wake of The Disaster Artist, 2017 viewing. 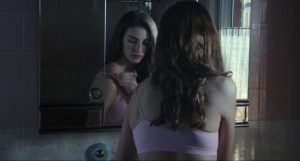 However (yes there is a however), is Veronica really that scary? Is the psychosexual/possession drama, based on real life events, all that blood-curdling? Do the visuals and the chain-smoking Sister Death (Consuelo Trujillo) really affect the viewing experience adversely, creating a sense of nerve-racking doubt, inseminating daunting suspicion and overwhelming sense of helplessness in its audiences? Well, it does, but not to the extent where the viewer would want to repeat a line spoken by one of the child-actors in the film, “I will not wet my bed tomorrow”. The kid is called Antonito (Iván Chavero), the youngest of Veronica’s (Sandra Escacena) siblings and a kid who does this little innocent something, towards the end, which could have been the catalyst of all hell breaking loose, “Viking Symbol of Protection” or no “Viking Symbol of Protection” (it seems that the Xerox facility is not available in the Madrid of 1991) . It doesn’t matter, when Sister Tobacco thinks aloud: “Run, run, run while you still can” or something to that effect. It is all very gloomy, atmospheric, highly unnerving at times and yes, it did manage to scare this sinner-man with one of the sequences in the film when the sun dawns on “Day 2”. 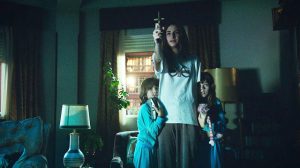 Veronica, as previously noted, is based on real life police case-files whose events were recorded by the one of the members of the first response team to reach the apartment complex; Detective Romero (Chema Adeva), after the event took place in Madrid in the year of The Lord (“He has nothing to do with this”), 1991, when three teenage girls decided to play with the Ouija board (Como se ve en la TV) or fuck with it to communicate with the spirit of one of the participants’ recently deceased boyfriend. Three days later the police received a distress call (408 in progress) with a frantic voice pleading for help. They play the actual (archived) police tape as the opening titles are being flashed on to the screen. That is something that put this pilgrim on a tangent or off it, thinking that Veronica just might be up there with The Blair Witch Project, 1999 or Paranormal Activity, 2007 or Sinister, 2012 or even with the heavyweights themselves, The Witch, 2015.

I will not wet my bed tomorrow and unfortunately for the film I didn’t even do it while watching it, not even by spilling the soda on the bed that I was consuming during the viewing.

With that pleasantry out of the way, Veronica does manage to rattle the senses and it does command some high-grade, extremely scary creature/psycho scares and then some. 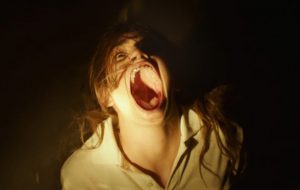 A coming of darkly age horror drama, Veronica is a mixed bag of highly potent scares and a story arc that bends in all the wrong places to squander the desired reaction from its audience by the appropriation of stylised edits and efficacious performances not only by its lead, actor Sandra Escacena but also from the supporting cast that includes child actors who do not let the others down when the Devil himself makes an appearance as the Criatura (Samuel Romero) with long blonde hair, first staring out of an old snapshot in the family pictures shoe box and then as a shadow gliding along the wall and finally as what could be vivid dreaming, hallucinations or Martin Sheen slowly being revealed as his muddy head appears out of smoky, murky waters. 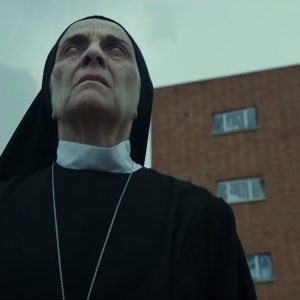 So, yeah, the film is what it is; absolutely terrifying and creepy and brutal and has kids as potential victims, but it is definitely not the scariest horror film ever; Sister Death, daddy from BBC Food, the sound of roosters as the doors close behind our damsel in some ‘holy shit’ distress and what have you or don’t have. 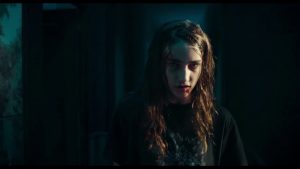 A must watch, in-spite of the inaccurate, puffy declaration(s)