When a young nun at a cloistered abbey in Romania takes her own life, a priest with a haunted past and a novitiate on the threshold of her final vows are sent by the Vatican to investigate. Together they uncover the order’s unholy secret. Risking not only their lives but their faith and their very souls, they confront a malevolent force in the form of the same demonic nun that first terrorized audiences in “The Conjuring 2” as the abbey becomes a horrific battleground between the living and the damned.
20181 h 36 min
Click an icon to see more 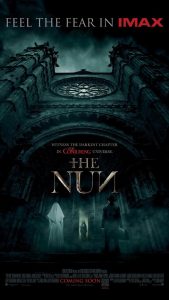 Why? Will IMAX change the film in to something scary?

“Finit hic Deo” or “The quintessence of horror ends here with 48 hour protect Deo, which will not save your soul for making a film this bad”

Corin Hardy (The Hallows, 2015) directs this much anticipated, so called horror film, trying to tell a back-story for a back-story, which happens to be a back story for a back story for a film, which is a way back story; and James Wan (Saw, 2004) approves by being the main producer on this one. So much so that the film was promoted as a venture, “from the creators of Saw“, and “James Wan” presents, and “A James Wan Production”. What did Hardy ever do? He made The Hallows. Right. 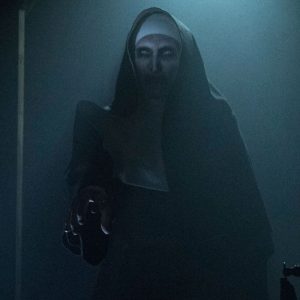 The film, a period piece, takes place in the Romania of 1952; with principle photography having taken place in Bucharest. I also happened to read somewhere that on the first day of shooting, the film was blessed by an actual, real-life Roman Catholic clergyman. It did not not help at all, if that was the purpose behind the baptism of a film dedicated to the Devil; like all Conjuring films, being dedicated to the dark forces and things that go bump in the evening, broad day light, night, the witching hour or what have you – it just did not help. 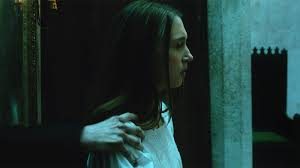 With quite an impressive opening and a solid atmosphere build up, we witness something that unfortunately marks the beginning of an end. However, the last scene proves otherwise. You’ll see, if you see, I mean watch The Nanny, I mean the The Nun. They could’ve easily titled the film such and it would not have mattered, highly atmospheric, well performed or not. If jump scares did not exist, then neither would The Nan.. The Nun. 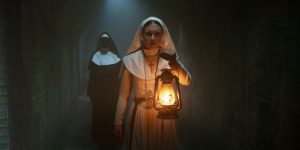 Actor Demián Bichir as Father Burke is summoned by the Vatican and he is evidently upset, not wanting to be there. For you see he is the p(m)ost modern priest of the grumpy variety. “Why are we here?”, “There was a suicide.” “Why are we here?” “To bloody well set up a premise for you to take a fucking donkey cart to to that part of Romania where the locals refuse, simply decline to visit, that’s why you grumpy mid-age priest you”. For the picturesque country side, with its lush green snow capped mountains and dreamland landscaping, stereotyping, typecasting atmosphere of a less than mediocre and a not so horror film. He is also asked to take along with him a young woman who is a teacher at one of the monasteries in Romania; a novice, a women waiting to take her vows after her noviciate has ended. Why send an inexperienced person to investigate such a gruesome discovery made by a man who calls himself Frenchie? They could have paired the Father with a seasoned nun to visit the abbey… Heyyyy…. Wait a second. There’s a bona fide nun already there. So there, the answer was right there all along the watchtower. 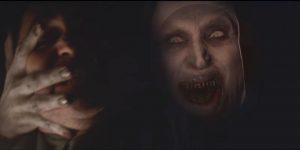 Buried Alive with an ugly as fuck woma… Nu… something

The scene where the trio meets the Abbess (Gabrielle Downey) was admittedly scary, with the long black veil and the throne and the Indiana Jones type of burial grounds, where Dr. Jones once directed sunlight with the help of a angled mirror and the tomb began to breath heavy. That was good ol’ Doc Jones. Here they do not fall in to a pit filled with snakes, instead, they take quarters in the same place where Sister Victoria (the one with the Chester Bennington syndrome) was shifted by Frenchie after he discovered her hanging from the top window of the abbey and right in front of the gate. “Wait, she wasn’t like this when I brought her here”. And there’s a lot of blood on the steps. Do hanging victims bleed?
“Don’t be alarmed, corpses sometimes sit up and sit comfortably on the stone veneer; it’s perfectly normal.”
“You’re boss and The Exorcist is still twenty one years away, so I’ll believe your bull and continue in our quest for the ark, I mean the cause of Sister Victoria‘s (Charlotte Hope) suicide and the key that is found clutched tight in her dead clenched fist.” 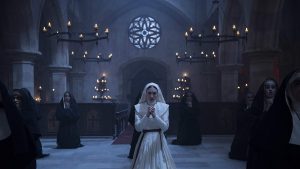 This one has Kubrick written all over it

This film has earned more than $364 million, more than the Conjuring films combined, yet it is quite pedestrian, a laughable attempt at scaring the poor audience who paid to watch this almost boring film, which has its moments but as a full package refuses to deliver even half of it; the package. The mild scares and Hardy’s attempts at jump scares do not work for shit. And there’s one too many in this film. So much so that if you take out the jump scares and the prehistoric Sister, who is not what she seems to be but an old demonic spirit, Valak, the film is almost non existent.

Then there’s also the catacombs and the blood of Christ; again as in one of Indiana Jones films. Where if you drink from the wrong Holy Grail/Chalice you are condemned to forever be cast in Pirates of the Caribbean. Just ask Ian McShane and Sean Connery (who was lucky enough not to drink from the ‘wrong’ Chalice).

A highly derivative film, which relies on the ominous soundtrack by Abel Korzeniowski and the sub-plot of the Michael Haneke masterpiece from 2005, Caché. And if it weren’t for the highly atmospheric DOP by cinematographer Maxime Alexandre , the film would have ended the minute we watch a young Vera Farmiga (actor Taissa Farmiga; younger sister of Vera but not yet a Sister), being interrupted by Mother Superior (Lynnette Gaza). Right there, during the miniature volcano eruption. 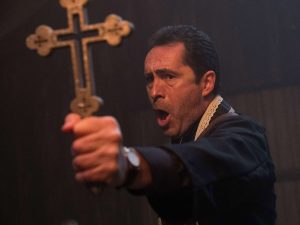 With a paper thin plot and really not much else to offer, The Nun can easily be passed. That is unless you have a thing for the refurbished Pennywise the Clown(-prince of Hollywood remakes) in a tunic covered by a scapular and cowl and a veil. If yes, then go ahead, spend 96 minutes of your life on this mildly entertaining… No wait, mildly non-scary (is there even such a thing?) film, that had me all excited when Atomic Monster, New Line Cinema and others first announced the release of this borefest. 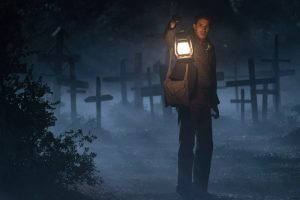 Predictable, mediocre (at best) and not at all scary, The Nun was a disappointment from start to a “The Hidden, 1987” like ending. 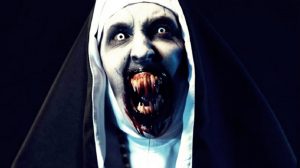