Macabre, international title for Rumah Dara (Indonesian title), and in Singapore titled Darah) is an Indonesian horror/slasher film in 2010. The movie tells about a group who attempt to escape from a house that owned by mysterious lady named Dara and her family. We later discover the family are killers and cannibals attempting to gain immortality. The film is based on the short film Dara. Before the film was screened in Indonesia, it was screened at several festivals in 2009. Rumah Dara was released in Singapore where it gained an M18 rating (for Gore and Violence)
20091 h 35 min
Click an icon to see more

“Sometimes the crime follows the punishment, which only serves to prove the foresight of the Great God.” ― Terry Pratchett, Small Gods 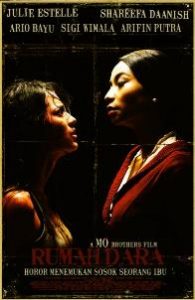 Punishment without consequence is perversion. Decapitating a human head with a chainsaw is extremely poor upbringing, as made evident by Rumah Dara or Macabre. A so bloody it’s almost warm and wet film starts off by taking its time to build characters. It defines each trip-maker either by their kinks or their worthiness to carry the weight of the Asia-Extreme on their shoulders, punctured with arrows. Or even by adding familial conflict, Tarantinoesque chit chat, Alam‘s (Mike Lucock) head and a bottle smashed on it, simply to add layers or passengers or body count – you decide. 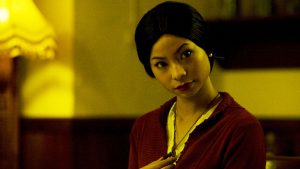 Tobe Hooper has not only inspired the fear stimulus in filmmakers from his home country Texas but he has also tapped into a collective consciousness, which has learned to perceive fear in a certain way. The communion would include both the filmmakers and the movie goers. The Texas Chainsaw Massacre, 1974 has influenced scores of films and popular culture across the green planet, which bleeds red.

Macabre starts with an 8mm treatment, where we see ancient recordings of young people being fed and then kids slicing off the jugular of a burly man tied to a chair with a bag on his head and replacing the knife back into the tray that a motherly figure is holding. Then back to being fed until the 8mm film catches fire somehow; first becoming gray, and orange on the sides, and finally a complete dissolve to black. 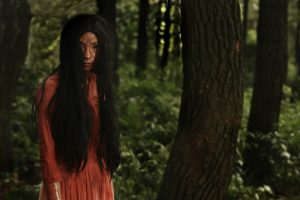 Nice touch, and a close up shot of a tattoo that means nothing.

Abandonment brings on wrath when a group is on their way from Bandung (Indonesia) to the airport and then Australia and pick up a hitchhiker, a pretty damsel in distress, Maya (Imelda Therinne) who looks all suspicious and looks around nervously over her shoulder, behind her, at the rest of the passengers. She is riding the shotgun. So we have a strange, pretty woman who wants a ride home instead of a crack-addict who laughs and cuts a lot and just wants a ride. Get the picture? 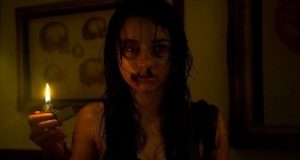 The heavy, grey clouds of foreboding descend upon the viewers as Dara (Shareefa Daanish) – Maya, the damsel’s mum – enters the frame and then the film goes from being foreboding to full blown alarming as the very sinister (read: fucking scary) looking Dara insists that the group stay and have dinner, despite protests from a pre-The Raid: Redemption, Adjie (Ario Bayu) and his pregnant wife Ladya (Julie Estelle). The evil looking spin pin on Dara that keeps the hair-bun intact is focussed upon much. The sheer diabolical and degenerate presence of Dara is upped an ante by the bloody ritual spin pin.

The house is huge, but inside it is mostly-empty, with furniture sparsely placed far from the walls (we watch this in a single wide-angle shot of the living room) and a mantle to the fireplace. It is gloomy, even though well-lit, it stinks of rot, yet the food smells delicious. It reminded me of another brilliant Greek Horror film; Singapore Sling, 1990. Contradictions like those cause the viewers to perceive of an end so terrible that it would put the rest to shame. That is not the case, however, Macabre has a pretty agreeable ending, if not predictable from a 100 miles away, for a horror & slasher flick. 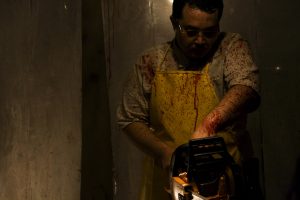 Pure horror comes charging with the force of a bull and slams itself into the viewer with maddening yet familiar visuals after the thirty-minute mark. What’s your poison, it asks? Well, the party even drinks to that, but seriously. There are knives being driven through the middle and the ring as it slices the palm, there’s the fucking chainsaw causing all the bloody carnage. We also have guns going off when the cops get involved, Armaan (Ruli Lubis) the butcher makes mince outta full grown men, women and children and the hunky but villainous Adam (Arifin Putra) is always returning from the dead as if he’s been asked to play Jason Voorhees. The slight little thing about this film is that it resonates with the same impetus of films like Secuestrados, 2010; Hostel, 2005; the Italian B gem, Shadow, 2009 and so on. Point being, the turn of the decade gave us some mind-bending, nerve-rattling and genuinely horrific films. Macabre, even though it has aged in its credo of torture-porn, is one of those films that changed the way how the horror fans, the gore-hounds or even simple moviegoers, were in for a blood projectile from a severed limb surprise.

The scenes, which made the hairs stand on the neck were the trademark Mo Brothers’ (Killers, 2013) villain entry scenes where a subject appears in the back; with the good guy in the center of the frame, the woman emerges with a knife from a blur to a crystal clear, as she closes in on the camera and her victim (very Argento), to a bloody scene transition. Fantastic.

It’s been awhile since I saw something this bloody.