Escape is not an option

The internet watches live, as reality-show contestants struggle against time to see who will stay in solitary confinement the longest and take home the one million dollar prize.
20201 h 49 min
Click an icon to see more 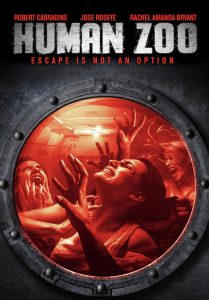 I heard about this atrocity from a friend, a gentleman who it turns out is not as familiar with the genre of extreme cinema and the perils associated with it, the highly potent and aggressive immorality that hits the viewer at 200 miles an hour. The poor guy went it unassuming and fully susceptible to what director John E Seymore has constructed, with very little attention, or no attention at all to the screenplay, resulting in a confrontation with white text on a black background. And this is but only a slight inconvenience compared to the barbarity and abomination that follows. Later he said to me that he was “in a very dark place”; but naturally. I felt for him and what the poor guy was made to endure for a lengthy amount of time, 109 minutes, to be exact. It was not required, to be even more specific. However, it isn’t for me to determine what is and not needed; the obligation of the filmmakers, their commitment to despoil the senses, shred them to pieces and burn it all up.

The synopsis – whatever propane deficiency that was to follow – is misleading. I paused to check if the intertitle of the introduction on the screen was how it was meant to be read. And yes, it definitely was extremely deceptive and vague. There is even a cold open, where one of the fair game contestants comes into frame (before being taken away) and says something out of the blue and not making any sense in isolation or its entirety, or the monstrosity that follows. 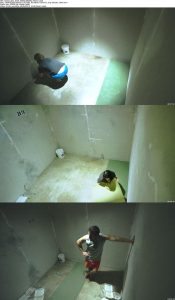 The lady who is shown to be some of an assistant to the producer of this show, Solitary Confinement looks like she has been asked to feign a horrid smile on a face that looks like it belongs to a freak show of a circus, and then, as if the pills she had taken a few minutes back kick in, the onset causes her to pull off a “you know what” and suddenly the prize money is doubled, and surprisingly no one applauds, like how they were reacting to other things being said earlier to the makeup overkill. The producer himself makes an appearance and once again reads out the rules of engagement, once again erroneously and when he does realize it is a glaring mistake, he quickly reads the remainder, chewing his words when the on the prize money bit and then again there’s a scene, which makes absolutely no sense. Well, not unless there is a sequel. This film is cringe-inducing and hikikomori fetishism gone foul just like Tom Six’s, Centipede trilogy minus the retreat to isolation. For you see it reaches a point where we, as viewers, desperately want relief from the constant battering of the senses but don’t get even a semblance of it. The story-telling is arbitrary, under-developed and shaky; the dialogue is, at best, declamatory and improvised; replete with expletives being slung at the walls that seem to be closing in with each new shot. The film is shot with inverted angles interlarded with long, languorous takes. John E Seymore expresses suffering and distress by posing in a smoldering, filthy stance and mustering up barely fleshed characters. 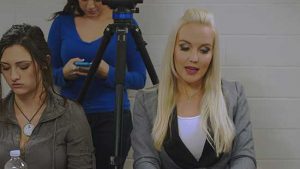 We are shown the auditions and then one after the other, why the contestants think they are perfect for this kind of a game show?. Here it gets a little tricky with the woman who looks like a porn star with bee-stung lips (heck, it could very well be bee-stung brain) and her assistant on the other side of the auditions. Until now no one is acting, just the contestants, which the film calls its cast members and that too under quick edits. Once the film is handed to the actors and their unscripted annihilation of self, that is when all hell breaks loose.

The visuals become odious, the screams become unbearable, the slow but sure incursion into madness, full-blown psychosis and the rapid loss of reason all become like products of a diseased but naturalistic conservatism and backlash running rampant through each contestants confinement. They are being watched by an internet audience, so they are made to believe; and believe we all do. More significantly when one is familiar with the significance of the title: Panic Room (they might as well have called it that but I guess that would entail more than just a floor mat, a bucket, and a ration of (oat)meals and went for Human Zoo.

A Lesson in History
Now, Human Zoos are a shameful part of European history and very real and degrading and racist exploit of the 20th Century where the German exotic animal merchant, Carl Hagenbeck and his famous (to this date) exposition of exotics. He is known to have brought back Laplanders (Sami People, indigenous Finno Ugric) with reindeer to Europe to be put on display, thus augmenting and complementing the animal trade and also giving birth to an extremely popular and profitable sub-culture for the civilized people. This preposterous and outrageous conduct was highly revered and it is for this very unhealthy reason that Hagenbeck is remembered, kindly & fondly and is thought of as a provider of highly exotic entertainment. In 1874, Hagenbeck had a group of 6 Sami accompany a herd of reindeer, and by 1876 his acts included close to 67 men, women, and children. He is known as the pioneer of exhibiting humans for entertainment and profiteering purposes. In 1875, Hagenbeck began to exhibit his animals and Nubians and Greenlandic Inuit for reasons of technologically, putting on display the savages in a natural state. His exhibitions in all the large cities of Europe as well as in the United States made him a highly revered and respected man, whose books on his methods of hunting are held in high regard, to this day. For fuck’s sake, somebody stop this world, I wanna get off. 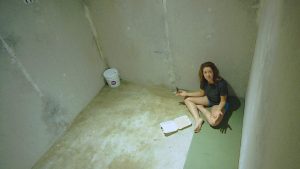 The film is somewhat an echo of the ethics that Hagenbeck carried lightly on his back. With the stakes set at a whopping dollar two million (it is still not clear who the prize money is supposed to go to?) Human Zoo slowly becomes just that. This once with mostly Caucasian people on the other side of the fence. The isolation with limited or no information (the crew was instructed not to engage any cast member in any way) in the film is highly disturbing, troubling and also annoying at times. It is not just carnal; it is filled with volatility and extreme brutal disorder, a disarray of the senses, the mutilation of the will to live. Everything is shown outright, whereas the implication is repellent enough. Indeed, one could argue that John E Seymore is making a larger point about the human condition and how anyone would act if confined to such isolation. Now remember this confinement is without erudition, nor does it have a time barrier to cordon it off, well not to any contestant’s knowledge. Even this pilgrim is baffled and (wants to bang my head against a wall but I’ve seen what happens) bewildered at the juxtaposition of the intimately debasing trope.

We are made to watch the suffering of the contestants for a good fifty minutes after which, the mind is too tired and worn down to continue. Well, it had become such about thirty minutes ago, when the makeshift toilet starts to stink, but there had to be a respite, there just had to be some hiatus, certain relief of any kind, but there isn’t and that is when the film rises a little despite everything that has happened to it. The contestants, the performers are truly an effective and hard-hitting, intense, powerful and bawling, shrieking, crying, pleading for their mommy and daddy, while they write on the walls with their own waste (“that’s my own shit I’m smelling“). You don’t get to hear that too often. 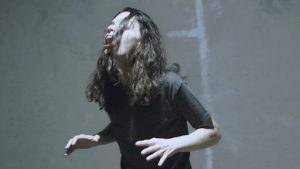 The situation becomes desperate, dreadful and hopeless as each act has outlived its run. And then it all comes to a sudden end, with another cold open with one of the female participants smiling into the camera and speaking of the game show and how a million dollars could change everything and then fade to black.

That is because everyone, everyone knows there is no such thing as a free million bucks and this film is as shoddy and careless as any given soulless shoe-string budget venture and what have you, but still, it does something to the viewer after the senses have been assaulted and the sensory input has been absolutely fucked with. The last time I watched someone try to write on the wall with his own feces was Geoffrey Rush as the Marquis de Sade in Quills, 2000 (a painful exploration). However, that came after the flirting with Kate Winslet and Joaquin Phoenix going mad (not for real, then) and Michael Cain trying to rack the Holy Spirit back into the Marquis. This film, on the other hand, comes as unknown, under-produced with very little or misleading information and an unknown cast and thus automatically becomes more potent, more savage, more downcast and deplorable than almost anything I’ve watched before and in the end more poisonous, just like the boomslang snake that bit zookeeper Hagenbeck in 1913, resulting in a painful and prolonged death.

One can easily fall into a trap and start to think of people who are consigned to isolation as a result of being non-compliant with the law but those subjects have some information and we have all watched Pappilon, and the relentless downer that it has become over the years; a downer but a classic at that. An eloquent tribute to the indomitability of the human spirit and a powerful indictment of those institutions dedicated only to break it. As such, it’s lots easier to admire than to enjoy; but admire nonetheless. But my friend, Human Zoo is only but a keen disappointment of a lumbering vehicle. It misses the outrageous hypocrisy and injustice and jumps straight to the inhumanity of being subjected to isolation for greed, a cardinal sin.

Stay far away from this nut-case making perpendicular cuts on his body with a box cutter knife, and everything can be seen from above, from a corner where a camera is installed.

You know something has gone wrong when you want the (neutral) guys to escape simply so that the movie can be over. This is so fucked up, like majorly disturbed and disturbing almost to a point of becoming incapacitated by the whole contemptible and ruthless deal