There is no way out.

A Romanian girl dreams of living the glamorous life she sees in Italian soap operas.
20151 h 34 min
Click an icon to see more 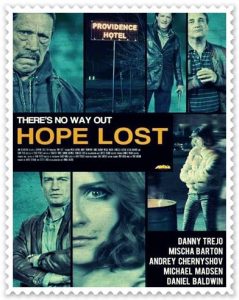 I’d watch anything with Michael Madsen, Eric Roberts or Mickey Rourke in it.

Plus this film deals with human trafficking from the slums of Bucharest to the grander slums of Rome. Additionally the director, despite the slow pace, or as a result of compulsive head-scratching has no clue where the film is headed with its ex-contract scissor sister, unknown clients who are being shown to us throughout, the looming unease from what you read in the synopsis (which never really happens as it err… should) the Seven Dwarfs with leather whips and access to Eli Roth‘s Medieval torture device collection.

Danny Trejo shows what a bad ass pimp should feel like on-screen albeit in terribly choreographed action bits, Madsen performs, again, as if lighting a cigarette to Mozart playing in the back; paying attention to just those two things – everything else can go sod off. The fifty nine year old son of a bitch knew he was on his way down as he once warned Bill that she was coming to get them all, back in 2004.

My point being that its fun to have a narrative that pulls on those kinks with an actor who’s seen so much, he’d just rather sit back and have some Harry shot up his arm than pay attention to whatever the fuck it is that others are saying. And oh, Danny Baldwin is in here too, just in case.