He'll make you pick up the pieces

Shamoto runs a small tropical fish shop. When his daughter Mitsuko is caught shoplifting at a grocery store a man named Murata steps in to settle things between the girl and the store manager. Murata also runs a tropical fish shop and he and Shamoto soon become friendly. However Murata hides many dark secrets behind his friendly face.
20102 h 24 min
Click an icon to see more 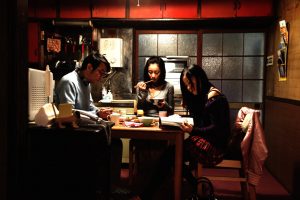 Cold Fish, in so many words is Straw Dogs (1971) taking a jet to Japan, into fish stores that look like LSD drain-houses and makes it shake hands with guts and gore. 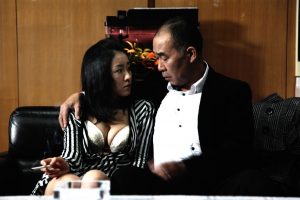 Dustin Hoffman broke-down and so did his glasses; break, and he ended up defending his cottage and an estranged, mischievous wife from the hillbillies and killed some in the process, including the nerdy mathematician disposition. 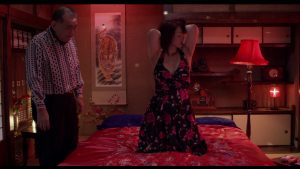 In Cold Fish, the small; meek; acquiescent; hesitant and bespectacled protagonist finds himself in a situation of sorts – which take sharp turns and puts Syamoto (Mitsuru Fukikoshi) in a place which reeks of psychosis and rot. 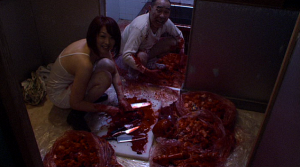 His wife is young and disenchanted by the whole deal. The stereotype teenage daughter has her hormones boiling at a 1000 degrees. The director shows this to us as if in a dream. The camera pans slowly, it zooms in and out at snail’s pace and tries to relish every gesture, the slightest emotion, to savour every delivery and props in most of the the frames. All this is done brilliantly, however, if the movie was a tad-bit shorter, I would have liked it even more. 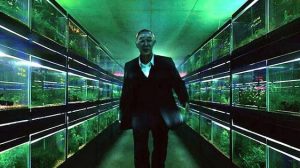 The manic Murata (Syamoto’s business partner, in some ways), played by Denden is a complex creature. The part is not an easy one and hats off to Denden for bringing Murata to life on the screen. The exercise is nothing short of passion; a study in strenuous acting sequences being thrown at the audience without contrition or self reproach. He puts on Murata’s skin and does not take it off, even when he offers a severed something to our hero to feel it. 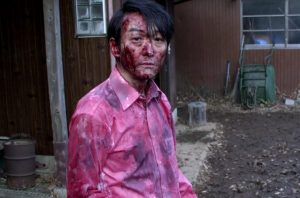 If Straw Dogs was a shocker for the seventies, Cold Fish is a wake up call (based on real events having much to do about nothing); digging into the audiences’ minds by using the voluptuous Megumi Kagurazaka as Taeko, the wife of Syamoto and the inciting Hikari Kajiwara. Both ladies are a treat to watch, all of it; the brains and the booty. Freud would be grinning too.

Not for the squeamish though, one scene reminded me of Ichi the Killer (2001) and that’s not pleasant, even in a funny way, even if a woman is hysterically laughing, covered in blood; not her own.