May the Lord have mercy and grant you a swift death

During a shootout in a saloon, Sheriff Hunt injures a suspicious stranger. One of the villagers takes care of him in prison. One day they both disappear – only the spear of a cannibal tribe is found. Hunt and a few of his men go in search of the prisoner and his nurse.
20152 h 12 min
Click an icon to see more 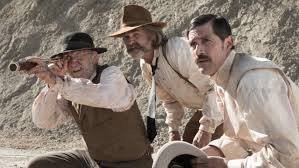 It begins with the plenty familiar Spaghetti Western sound of a buzzing fly and the next thing we know Bone Tomahawk descends into a full blown Thousand Corpses feral state of bloody, savage affairs hell; ripping away the very fabric of film by breaking every law of framing. The right position hurts, the men are made two dimensional when a terrifying discovery is made; the character focus is forced upon the viewer by placing the crippled cowboy extreme right of the screen. Tomahawk chews on its own script and spits out the dialogues that sound like a strange tongue, like how the villainous tribe is introduced to us in the beginning with the Native-American telling us what they are and even then the final confrontation comes across as shockingly brutal and ferociously threatening.

The Deputy shows us that the journey is a bitch but you can perhaps make it better by telling stories and sharing fond memories. All that in the midst of evil incarnate, which is there for a purpose, just one damn purpose, to make men atone for their sins. The Armed Gentleman is a vain man, but for extreme closure purposes, The Cowboy is crippled without much purpose other than the idea itself and he also somehow manages to climb a (dirty) dozen perpendicular stories, never mind, he has the cure. The Sheriff, towards the end, has to be one of the best scenes of its kind I’ve ever watched in a long while. That, the elevated, non-nonchalant performances (that are brimming with withdrawal anxiety), the alien-tongue, the peculiar & exceptional direction and the heart-stopping rogue-desert-suspense makes this one a remarkably singular event.

First time director and writer S. Craig Zahler, puts his picture together slowly, almost making the viewer impatient and then something happens that would only happen in a film but it looks as if it does not belong there with the action filmed without any musical arrangement, the out of place but sitting in quite unusually well lair of horror and other unorthodox scenes (savage-stringing-up) isolate the viewing experience. Bone Tomahawk is alienating thus pleasing, it is outlandish in its presentation and therefore intriguing.

With its blend of Western and Horror, the film manages to leave a dusty taste in the mouth, much like the washed out look of the pretty forward for its time movie of the year. Plus the supposedly intentional cracks in film-making makes this one a crazy-horse, a wild ride that you will not forget soon. No ma’am. 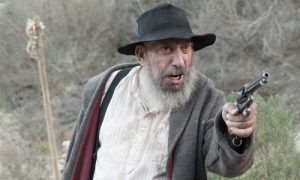 You know it’s gonna be a bumpy ride when a film opens with Sid Haig pointing a gun to the camera, or a little right of it