Behind the Mask: The Rise of Leslie Vernon, 2006

Behind the Mask: The Rise of Leslie Vernon

Freddy, Jason, Michael. We All Need Someone To Look Up To.

The next great psycho horror slasher has given a documentary crew exclusive access to his life as he plans his reign of terror over the sleepy town of Glen Echo, all the while deconstructing the conventions and archetypes of the horror genre for them.
20061 h 32 min
Click an icon to see more 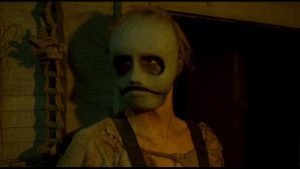 The Belgian film, Man Bites Dog, 1992 by the trio of directors, Benoît Poelvoorde, Rémy Belvaux, André Bonzel beat this film to the idea of a film crew following and documenting the shenanigans of a serial killer (Leslie Vernon, played by Nathan Baesel), by fourteen years. All this black comedy does is slam a long, boring twist on to the original and then the whole shithouse goes up in flames, fraternity jocks and their promiscuous girlfriends included. 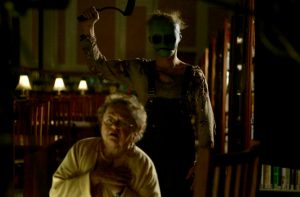 Words like industry term, thinking of the closet as a sacred place much like the pregnant womb, “the philosophy of terror” and even more ridiculous ideas float around the shabby abandoned house with a back story so loose, you can’t even use it to keep your pants up.

However, this film has one thing going for it; the starting bit where fictional slashers are spoken of; Voorhees, Myers even Freddy Krueger: Taylor Gentry (Angela Goethals) speaks into the camera with house number 1428 engraved horizontally on the wall next to the door behind her: “The town of Springwood, Ohio is so overwhelmed by the killings that the community believes that it can bring the creature back to life just by dreaming of it.” 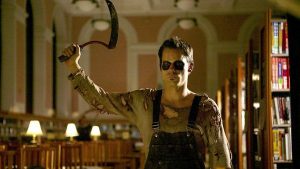 Another cool thing about Leslie Vernon is Robert Englund as Dr. Sam Loo… no, no. His name is Dr. Halloran and Vernon, we are told was under his treatment before the fateful night or day or whenever the fuck it was that the townsfolk got really tired and burned him aliv… no, no. They threw him down the waterfall.

There is a moment when one of the film crew members understands the gravity of the situation and says: “So he is like Jason and CHUCKY and Michael. Right?”
“Yeah, like them.”
Chucky? Leslie Vernon could be anything but Chucky – the filmmakers do go the distance and explain the phenomenon of ‘Supernatural Murders’ among other things like how to properly squash an apple or a dozen. 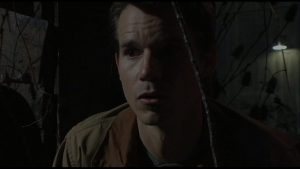 I wouldn’t say it was predictable and the twist, although, ten miles long, is bemusing to watch unravel. The film could’ve been way shorter, more dark thus more effective in its contaminated visuals. It should have had less filmmaker/killer bonding scenes but in retrospect it had to be done such, to make the four and a half block twist work.

And if that isn’t enough, Behind the Mask forces the viewer to sit through the end credits just to watch what we already know. 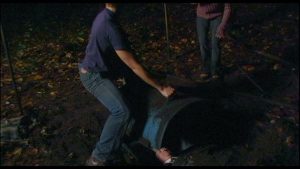 I was more bored than entertained,