As the Gods Will

Takahata Shun's day at high school begins just as boring as ever, but it doesn't end that way. He and his classmates find themselves forced to play children's games with deadly stakes. With no idea who is behind, the only thing Shun and other students can do is keep trying to win.
20141 h 57 min
Click an icon to see more

Take the sound editing for instance. We know what has happened despite the event not being shown and instead replaced by an elementary sound or a children’s song. As the Gods Will is a director’s nightmare, a feat only someTHING like Miike can execute.

Splattered with a plethora of psyched out colours and one of the few films where the CGI works like the crown wheel of the Oyster Perpetual, Miike’s direction feels more confident as his obsession with Anime/Manga and Nao Ômori (Ichi the Killer, 2001) grows into a playful bear, the size of two Transformers, when they’re not vehicles.

This film is filled with surreal images and evidently decapitated mannequins with floored extras mixed in with the lot. It is Maze Runner meets The Running Man inside Miike’s Daedalian head. Perhaps that is an overstatement, probably I’m still thinking; ‘but seriously, what’s the deal here?’.
However it may be, Miike has paid homage to ancient Japanese films of gore… I mean yore. Well not really, this seems more like the stop motion films from the Golden Age of Japanese cinema and director Ishiro Honda – but As the Gods Will is sort of an anti thesis to those films in terms of the antagonist’s dramatic representation and mushrooming. 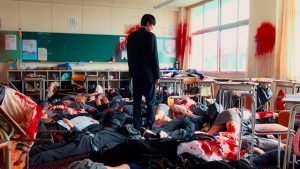 The director’s films are far from subtle, including this elephant cannibal baby; however this time there is a certain calm undercurrent to the approach and style of the hypermanic Takashi Miike.

A strangely entertaining film that must be watched to further strengthen faith in the art of cinema, and how! 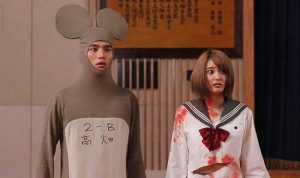