The worst crime committed was letting her go.

Angel, a woman who was horribly abused by her grandmother as a little girl and institutionalized after killing her, embarks on a killing spree as an adult. Though sentenced for the rest of her life to an insane asylum, Angel was released due to inside governmental pressure while being pronounced dead in order to avoid public outcry. Now Angel’s on the loose again, and a government agent is ordered to kill her in order to cover up the blunder.
20151 h 23 min
Click an icon to see more Angel or Still Water quickly tells us the story of Angel a 10 year old girl incarcerated for life for her ghastly deeds. The actions are the direct result of repeated abuse in a depths of hell basement, clown make-up and Granny dressed in a red evening gown with fur and a slouch hat all from the Glamorous 1930’s, all pretty eerie and cruel.

The film shows corruption at the highest government level. The Wolf (from Pulp Fiction) MP, a CM who is in contention for the PM position: “Just fucking make it go away.”

An Agent Maria Hill-like character from The Avengers, 2012 is here, although she is SAS now, to the viewers and her partner – an aging ex-CIA, ex-Black Ops ex-rated hit-man (Karel Roden). He is cold and icy and calm and surprises the viewers towards the end.
SAS Agent Bradbury (Margo Stilley) is as hot as a volcano, cliche. She could wear an eye-patch and not look out of place. However, her casting does help the film to come full circle in the end.

Based on the best seller book, Core of Evil by Nigel McCrery, the direction and quick flashback edits and the mood change of Rose, I mean Angel, is all very good and does justice to the plot and brings it full circle, (I could be wrong because I have not read the book); even if it comes across as daft at times with its overblown but, for lack of better production values, fun plot. 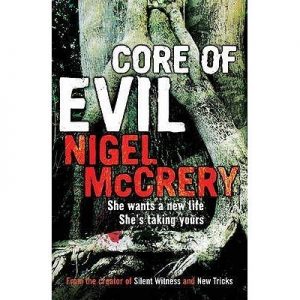 Angel uses very little CGI and it keeps getting farcical, but hey, never mind. The DP by Ali Asad (Mad to be Normal, 2017) is good enough for its essence and the big political cover up is what drives the picture and not the other way around. Ocean, I mean Angel wears a torn black veil that covers half her face while taking down senior citizens (reminds me of an old Johnny Cash single). Why? Because she is shown flaying a human face, exactly the way the veil (or whatever is left of it) is designed.

Critics are outraged with Jenn Murray‘s (Angel) performance and how she is only capable of two or three expressions, tops. Well, perhaps they should watch the documentary “Child Of Rage, 1990‘ by Gaby Monet. The victims of early and extreme abuse and perpetual threat of being murdered often become victims of Reactive Attachment Disorder.
The unhinged and pining Sugar, I mean Angel is impulsive, her mood swings are perpetually being stretched to two extremes and with little superficial help, she becomes a killer who shouldn’t have been. The film is mix of revelations upon hints of a paedophilia ring. I will not delve in to that.

“You had to spoil it didn’t you?”
SPLASH!

John Hannah is here and delivers; who wouldn’t if you have Agent Maria Hill-like character as your partner?

Stop clowning around and get to the bloody contract killer point