In the Iranian ghost-town Bad City, a place that reeks of death and loneliness, the townspeople are unaware they are being stalked by a lonesome vampire.
20141 h 39 min
Click an icon to see more 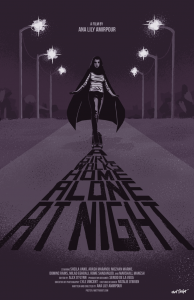 Highly atmospheric and equally stylish with unparalleled cinematography, Night begins with a petty kidnapping (?) as an Eastern James Dean, complete to the rolled trouser legs, a white T-shirt and greased hair (just that he is not surrounded by happy, cheerful, school-kids), walks past something, which to me came off as being ambiguous. A futile attempt at showing the effects of war in a country perpetually ravaged by conflicts of the 1100 AD Crusades variety. The wars, it seems, have created a counter culture. The youth are in revolt against guns, bazooka’s, grenades and night-vision (for all the wrong reasons) with guitars, cameras, paint brushes and words. And the latter is not without the war torn angst that all countrymen harbour; all countrymen but those working against the State.

This is shown with visuals of industrial oil extracting equipment penetrating Earth again and again. Visuals that puncture the entire film (some directly after a murder scene) where certain connection can be made to the drawing of blood with the huge-ass conductor pipes and boreholes (proboscis, needles?); piercing the land like huge tentacles from a Gareth Edwards or a Verhoven film, crowded with monsters. 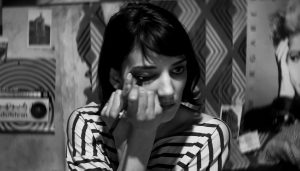 The film is shot in silver to lovely effect. The b/w enhances the sharp features of the ancient Persian Empire and the Zoroastrian people. Our Iranian Danny Zuko walks past someone leaning against a wall. The viewer is taken back to Hollywood of the 1920’s when women donned the flappers and took upon a La garçonne look. The features of this person resemble a heroine straight from a silent film, where lips are barely noticeable, with a sharp and a pointy nose and eyes painted with mascara, making them look bigger and the most prominent feature. Feels like Director Ana Lily Amirpour (Ketaab -‘Book’, 2010) pays a slight secret agent “cue” nod to the silent era of Hollywood-noir.

Certain scenes come across as being truly uncomfortable and at the same time highly entertaining. The Junkie dad who is dependent on his son and the recurring misogynist TV presenter telling women how awesome they are doing what the state prefers of them; making homes. That is ancient, now the women are contributing 37% to the GDP. Iran realised that if the sanctions would never be lifted then perhaps women should be allowed to work.

The Vampire is a metaphor for the moral police, her veil symbolising spying and a cloaked Count that also helps in the transformation of the highly desirable (in all modesty, well…) Sheila Vand, who gives a mute, calm performance; except when the fangs pop out, as The Girl. In a few scenes Vand uses her charms to draw victims in and then the make-up crew changes everything just before The Girl lurches at her victims. She maims the poor schlemiels with the speed of Quicksilver from X-Men. A nice touch; actually absolutely frightening and super to watch. 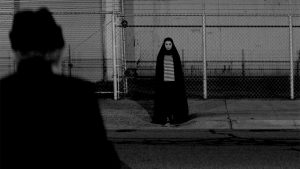 The asexuality of the characters goes a long way in showing the repressed yet Acid popping youth, at an underground and in shambles trance club, approaching the opposite sex with extreme caution or with a Khomeini may care attitude. It’s probably in the new Iranian generation’s blood. 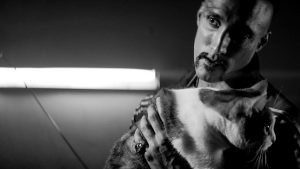 Amirpour shoots her short (yes short) film with the calm of white noise from a turntable and the fiery consumption of cigarettes that crackle at every inhale. It works like a Swiss Watch. However, the 101 minutes could have been made shorter by doing away with the symbolism appendage incorporated in Night. It forms a clutter, you see; specially with the subtitles. Although I could easily pick up words from Persian and that added to my viewing pleasure. Urdu (my native tongue) is partially derived from Persian.

This is not Only Lovers Left Alive, nor is it Let the Right One In. This is a film that tries to explain a politically suppressed, yet an Iran that will not give up, simple. We are shown its everyday struggle for identity and dodging the penalising, disciplinarian stare of recompense. Shown here through the eyes of The Girl with Bubikopf hair.

Once again, the anti-establishment (or pro-state, you decide) hence the sheath-like film is more about the grim, although highly charged (in its anticipation) atmosphere and it is simply an arresting and striking and an extremely good-looking film that does not mind throwing one gorgeous scene after another at us, making us believe that a narrative is playing in the back somewhere. Similarly, after the viewing, we think the film is visually violent but pay close attention.

Coupled with a lovely soundtrack that fits the scenes like gloves; it makes them even more moody and sullen and gothic.

Keep a lookout for Kick Ass from Motherfucker, 2013. Ummm. That bends on the autistic spectrum. Nothing personal. For those suffering from it. It isn’t too bad. I would not know. Or… fuck it.

And what the fuck? A woman bathing in the nude; boobies moment in Iran? NO WAY! That would be like calling a homosexual a homosexual in the outback region of Australia.

The movie was shot entirely in Sacramento and Bakersfield in Cali. Makes complete work-hazard sense.

A great film, with lovely, heart wrenching and an almost sultry texture, A Girl Walks Home Alone at Night is nothing short of an compelling horror film from a country facing bigger horrors, most of their lives. 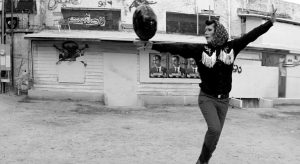 The ending shows a car’s plate that reads Shehar-budd, as the vehicle and its passengers dissolve in to the night, leaving Bad City behind. 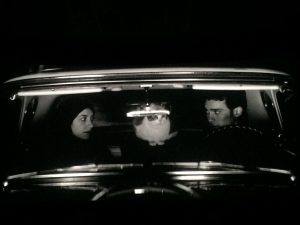 An all alone must watch.