Five carnival workers are kidnapped and held hostage in an abandoned, Hell-like compound where they are forced to participate in a violent game, the goal of which is to survive twelve hours against a gang of sadistic clowns.
20161 h 42 min
Click an icon to see more

For all the evil clowns in the world, for all the fancy names given to those evil clowns like Sick-Head, Shizo-Head, Death-Head, Psycho-Head, Sex-Head, Need-Head, for the almost brilliant opening and a man that kept reminding me of The Elizabeth Arkham Asylum for the Criminally Insane, for all the bourgeoisie costumes and the aristocratic wigs donned by Father Murder (Malcolm McDowell), Sister Dragon, Sister Serpent; for all director trademarks, from freezing frames at the end of a scene or shooting with an 8mm, for Charly (Sheri Moon Zombie), the damsel in distress and Venus Virgo (Meg Foster), for all all carnival shenanigans, for all the gore and nudity in the world, for the period setting, for all the satanic rituals, for all bourgeoisie vindications, for the plot trapping of twelve hours in an isolated compound, for all its bizarre flourishes, for the brilliant soundtrack, for the homage to one of the biggest cult classics ever (that Zombie is completely obsessed with), for Sheri Moon Zombie trying to quit smoking during filming and thus making her more miserable; for all of those things and a few more the movie cannot redeem itself. It looks, feels, sounds, smells like a lazy effort at trying to produce low Grind-House cinema. 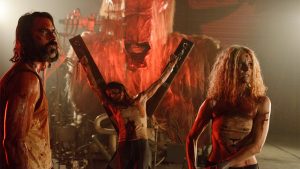 31, unfortunately, is tedious and derivative for most of its 102 minutes. There is a glimmer of hope at the 57 minute mark but that soon fizzles out as well as the direction goes even further South; I mean that literally. 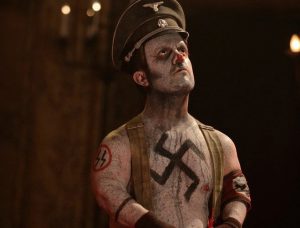 Rob Zombie used to make good films before Lords of Salem, 2012 and I forced myself to enjoy that one too but I am drawing a line now. Well, not exactly, being a fan it just breaks my heart and makes me furious. 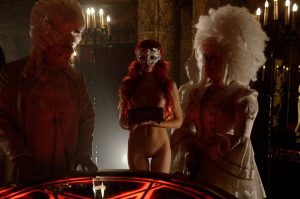