Two brothers intercept 911 calls in their Father's beat up old Ambulance to exact revenge on a group of careless teen drivers.
20151 h 24 min
Click an icon to see more 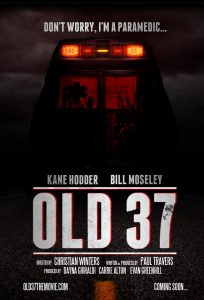 Is that a dead facehugger that the fucking muscle giant has his face covered with, on the poster?

No. It’s just a dirty old dishcloth tied with a black tweed rope.

We watch a big dude (Kenneth Simmons) listen to crackle on the make-shift EMS radio scanner, trying to intercept the 11-80’s (Accident – Major injuries) being announced by Police dispatch. The funny thing about the scene is that we hear dispatch mention, “… Severe head trauma”. Now this is the 70’s, ergo no cell phones. The only possibility could be a vehicle passing by and stopping at the next gas station to call the Police. Why didn’t they take the injured chick with her? And later when a real cop shows up in a Smokey Bear Hat and stumbles upon a 187 (homicide in progress) and 5150 (mental case) and dismisses the huge man in a paramedic uniform telling him not to worry, he’s a paramedic; Smokey the Bear swings a baton, hitting Mr. Paramedic in the face and then fade to black; “Now you’re not.” 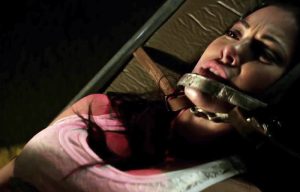 The film loses sense of its characters, for whom we feel no sympathy because of their self-indulgent, rich daddy antics. They race through the roads of Ashpine Oaks, a strip of thru-way turnpike, covered on both sides with dense forests and a sinister car dumpster hidden deep in the recesses of the pinewood. When the credits are playing in the beginning, a woman can be heard (among other snippets of audio news report, coupled with a Texas Chainsaw Massacre, 2003-like montage of a filthy rundown house with shots of filthy bathtubs, broken windows, crooked signs, torture devices, et al) saying that there have been 20 disappearances in the past so many years on the stretch of the infamous Ashpine Oaks and that the thoroughfare is the Bermuda Triangle of Long Island. It was a terrific way to start a picture but after that it was all downhill. Everything except Daddy-O digging his fingers into a deep wound and tasting the blood of the dead.

We have two horror veterans playing the killer duo. Bill Moseley (The Devil’s Rejects, 2005; Texas Chainsaw 3D, 2013) is the mouth and his kid brother is the monster, the legendary Kane Hodder, popularly recognised (or not) as Jason Voorhees, who puts the victims in to an industrial-sized meat grinder. Yawn. 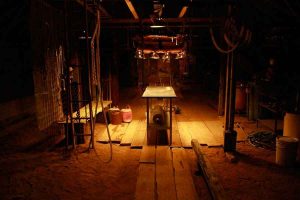 Old 37 is is a complete overblown mess of a clutter of characters who can’t act to save their boob-job from being punctured. Having said that, Jason/Kane looks horrifying and means childhood trauma business until he is asked to dance like a chicken for an officer of the law. Sheesh.
Plus he looks like Fallon‘s bodyguard from Daredevil, 2003 once the mask comes off. Nothing is misshapen, neither is The Elephant Man hiding behind that dishcloth. Bummer. 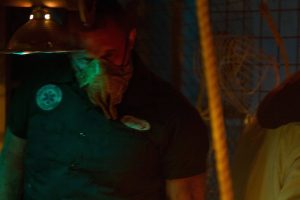 The eighty four minute feature is a senseless, illogical, droll and ridiculous bastardization of a genre gone ripe. Nothing works for the entire length, which felt like three hours. Everything looks forced, even the scenes when the kids are fucking each others brains out. 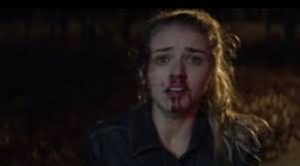 Too much coke for a newbie

And who the fuck cast Sascha Knopf and her fucked up lip enhancement botox. She made me want to string her by a cross but the film did it for me and I was still not satiated. 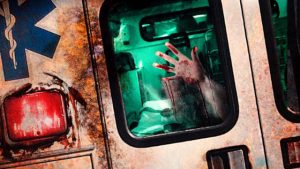 Titanic in an ambulance