A true story, Bela Kiss was one of the the most brutal serial killers, who killed 23 young women during the beginning of the first World War. The blood-drained bodies were found in metal barrels, conserved in alcohol. According to rumors, he was still seen decades later, in different parts of the world. He never was found and so the whereabouts of this man are unknown, even today. Almost a century later, five bank robbers search for a hideaway in a remote hotel, as they flee from the police. Brutal and unforeseen events take overhand and build a bridge to the past. The assumed safe house turns into a nightmare... is Bela Kiss still alive?
20131 h 46 min
Click an icon to see more 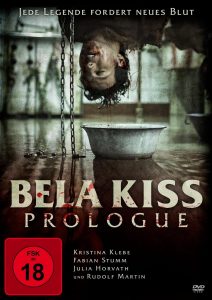 Not bad for a film, which invited such scathing opinions; Kiss is a tense film with 440 pounds of excess emotional baggage. The build up to mischief at Hotel Transylvania takes its sweet time in coming to play and terms with Nikolai‘s accent and horrendous dialogue delivery. The kills are subtle, yet impactful, shit goes nuts and all woozy in the third act when one of the guests is administered a certain paralyzing agent through tea, a hot cup of tea.

Kiss also goes the extra mile and explains to us that immortality is the only trait the hotel management and staff share with vampires, that and the blood I assume, since there was loads of it in this slasher, haunted hotel flick. The rest are mere fairy tales, says the butler to the victim.

With its enticing, true story allure/antiquity from 1914 to present-day and a jumbled, nonsensical plot, Bela Kiss entertains some with its no-show kills, mediocre to laughable acting, the back-story. Vision of the Avengers fame as a fucking serial killer, the home-coming of a twist, no-clue-title, and blood, gallons of blood, bath tubs full of blood.