There's more than one way to lose your life to a killer.

The true story of the investigation of the "Zodiac Killer", a serial killer who terrified the San Francisco Bay Area, taunting police with his ciphers and letters. The case becomes an obsession for four men as their lives and careers are built and destroyed by the endless trail of clues.
20072 h 37 min
Click an icon to see more

“Why does man kill? He kills for food. And not only food: Frequently there must be a beverage.” – Woody Allen; Without Feathers

“There will be killing till the score is paid.” – Homer; The Odyssey

“When you make the kind of movies I make, you get weird letters from people.” – David Fincher

Speaking of letters, The San Francisco Chronicle received a handful of them from an alleged serial killer from the Sixties through the Seventies and a final letter in 2007, when the film was released (the film’s chronology of The Zodiac Murders ends in 1989); his body count, a ‘mere’ five people.
Compared to twenty people killed – on average – everyday in the various jurisdictions – as noted by Bruce Banner playing Inspector David Toschi – of other random murders being committed in San Francisco, including the counties of Napa and Solano; murders with motive and also crime scenes for the Delphic killer without motive and with sub-rosa cunning & an insatiable urge for attention and confession and also to boast The Perfect Crime. 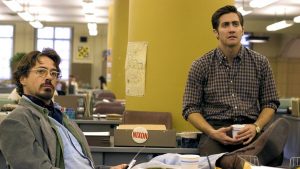 Who was the Zodiac? Was it Arthur Leigh Allen, Rick Marshall, Robert Graysmith, Paul Avery, Inspector Toschi, Bob Vaughn? It seems Zodiac was the collective consciousness of all people either involved or affected by the investigation to catch a killer. 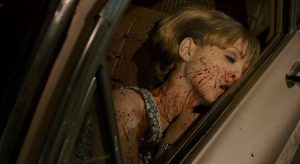 David Fincher prefers his characters to remain the same in their approach, not letting them learn from mistakes. He directs using bleak colours, long takes from the sky, characters wanting to be heard, instead resulting in overlapping conversations that implicate the participants by their own obsessions and a perpetual realisation of their own failures weighing them down.

One of my all time favourite sequences in a film

Fincher focuses on the investigations once the murders are out of the way. The events are shot as a matter of fact once/if we manage to overpower the Zodiac hype for those scenes when the murders are shown on-screen with every bit of crime scene evidence taken into account. The first recorded murder attributed to The Zodiac is not shown and only spoken of for investigative purpose.
The Devil is indeed in the details here. 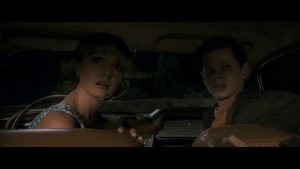 Look who decided to show up…

Take Mark Ruffalo for instance. All along he is portrayed as a man who loves food but is extremely picky (Animal Crackers?); he takes out the tomato from the BLT, he takes a bite from a hamburger and then leaves the rest, wiping his mouth with a napkin. He leaves the breakfast table and settles the tab; his breakfast untouched. Something similar to the erratic and shabby execution of cab driver Paul Stine.
There is a pattern here much like that applied by the Killer on the loose. Perhaps habits are formed when the cop is thinking like the killer for a better part of his day. 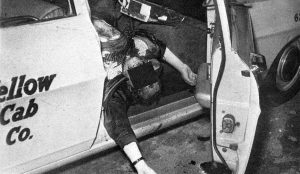 The master filmmaker knows, because he observes his characters reacting to different situations thrown at them by history or screenwriter James Vanderbilt (Basic, 2003). He watches closely as Paul Avery (Tony Stark) becomes highly paranoid after receiving a postcard from the killer addressed to him. Fincher takes it from there; reducing a once brilliant crime reporter to white-trash who speaks like someone from two centuries ago and moves as if to the operatic rhythm of The Andrea Chénier.
In one of the scenes he is shown cutting off all communication and becoming full of regret and fear and paranoia and then he changes his posture to that of a medieval prince, complete to the raised and bent hand with a cigarette stuck between the first and the middle, resting on a couch with his legs crossed and his chin high.

I feel that director Dan Gilroy cast Jake Gyllenhaal as Louis Bloom after watching Zodiac and Prisoners, 2013. My point: the character of Bloom was in the making as late as 2007. Gyllenhaal immerses himself in the character of Robert Graysmith – a cartoonist at the Chronicle and thus not taken seriously. So Fincher makes him take himself seriously. One look at his face in that damp, dark, gloomy and damned basement and you know Fincher has succeeded in scaring the hand-writing samples outta Graysmith and the audience (how could Fincher resist?); and then projectionist (Charles Fleischer) pulls the chain to the light-bulb, sending the entire cinema into complete darkness. It is then that the keen viewer realises the state of mind and the deconstruction of characters as all of the leads end up facing a brick wall or a dead body or a letter threatening to take down a school van.

Zodiac brings an era back to life with its chopper shots of the Golden Gate Bridge (always covered in thick black clouds), the time-lapse sequence showing the building of the Transamerica Pyramid to express passage of time and also style. It also brings Fincher’s obsession with the dark and his penchant for the uninviting and the Eeyorish execution/treatment of his films, which sometimes result in up to ninety takes; making the performers evidently furious and caustic – performances from even the smallest part. For instance the coffee guy watching The Jim Dunbar Show along with a few others at the office of The Chronicle.

Is she with you? Yeah.

The film is a manifestation of all the characters in the film, put in to a pot and stirred with a Bone Stirrer; from Darlene‘s initial reaction to the Chevrolet Impala ’66 passing by and then returning, to the inmate’s (Clea DuVall) small cameo as Linda del Buono to a highly distraught girlfriend of Graysmith (Chloë Sevigny) to Sgt. Jack Mulanax (Elias Koteas), who it seems is the most detached link in the investigation, but what do you know; Fincher weens all of that out of Koteas; by the end of it all his appearance has taken on the vibe of Vaughan in Crash, 1996, however, without the hyper-sexuality and the busted eye.

The film is one of a kind, exploring both, the laborious and back-breaking investigation process; the perils of media giving one man the power to rule over the consciousness of an entire nation; the brittle relationship of the police and the media and the wretched consequences that everyone, from the janitor to the new guy have to face. Graysmith enthusiastically shakes hands with the new guy and immediately tells him that his desk belonged to the great Paul Avery with glowing pride and a hint of approval seeking; only to face irritable dismissal from the new guy (Adam Goldberg played by Duffy Jennings) for both men. He is evidently being defensive in the face of the maelstrom.

I could go on and on and I have, to an extent. I feel I haven’t even covered one third of the film.
Rest assured, if you haven’t watched this film/PhD thesis before, I recommend you do it pronto. Fincher’s ideologies, style, the way he exacts perfection, the garroting technique and a complete understanding of the meaning of the Gulag keep changing as he moves on. The Gulags could be seen in ‘Gone Girl, 2014‘, specially through the expressions on the face of the ex-Bond Girl.

Fincher is a man whose styles and ideals may have changed since his music video days but the undercurrent of Alien³, 1992 is omnipresent in all later projects, and that makes this beast one of the finest to ever have been made.