Why Don't You Play in Hell?

In Japan, gonzo filmmakers hatch a three-pronged plan to save an actress's career, end a yakuza war and make a hit movie.
20132 h 06 min
Click an icon to see more 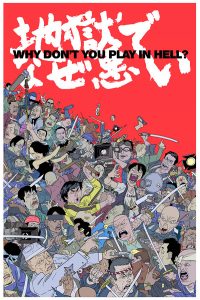 Squeaky clean blood slide. A scene, very early in this film with ADD, establishes the Asian cinema quirk, its intricacies that form a highly unlikely bond between two characters by way of the East slow motion, where a girl goes sliding in four inches of blood; leaving in its wake a splatter of spraying crimson that splashes alarm all over the pristine white of the set-piece. The slide is not shot in slow motion but when two characters make contact. The slider swirls and into the arms of a defeated man. Their eyes meet and what should have been a slightly bizarre moment, becomes completely outlandish with the stomp of one tiny foot, and change of music from classical to bubblegum pop. To say it’s surreal would be downright silly; the scene, the whole zany film is characterised by director Sono‘s highly outré approach to film-making. 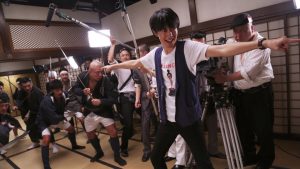 Sono’s 129 minute viciously funny commentary on gorilla film-making (among other matters of the violent kind), the perils and methods of it are amplified with the use of bold colours and even bolder actors. Sono composes his scenes such that there is fluidity of motion even when characters are simply having a conversation. Dialogue that is ripe with grandiose and nonsensical ideas and concepts, much like what the director fills his film with.

Sono realises the melting of film in this new age as something akin to the melting of ice caps, and how a group of amateur film-makers try bring the glory of 35mm on the screen. “The journey is more important than the destination”, is most significant here and not the big reveal (which is dealt with an inclination to leave matters in the hands of the viewers; making them flabbergasted by the end of it all) , instead every shot, every frame, every scene is to be consumed and relished making Hell an experience, not a revelation but, a highly charged and a reverberating experience of high calibre film making. 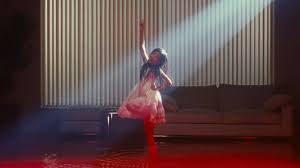 “You are the dancing queen Young and sweet Only sevente… scratch, scratch, stop”

The film looks as if it has had ten tall-boys of Red Bull, snorted cocaine and popped some Ritalin before running straight at us, screaming shouting, with spittle that dangles tauntingly from the the sides of the mouth  and throwing paint all over the place. 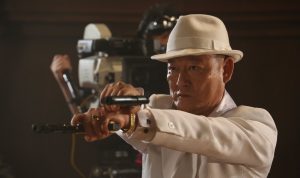 Hell is perfectly paced, brilliantly timed and seamlessly executed – with its sudden-death zoom-in shots – despite its manic and over-the-fucking-top plot and a narrative that would make the likes of Rodriquez and Tarantino all doe-eyed and wet in their knickers by the time Sono has selected Western influence (to sprinkle some on his film) in the form of Kill Bill and executed it by severing heads in some of the most innovative action sequences choreographed ever, by the director himself. The madcap action, coupled with the pumped up score (again by Sono) makes the non-compos-mentis narrative do just the opposite by coming full circle in its own idiosyncrasies. 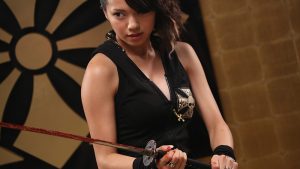 You can fly to the moon and back by the sheer amount of energy that the actors bring to the screen. Jun Kunimura (Kill Bill, 2004) brings his Yakuza-like gravitas to the role of Muto, who is transforming from the lover of women to a bad-ass mass murderer throughout the film but never loses the snake-skin suit. Sono’s actors ricochet from one insane action bit to another, inter-cut with a shot of a rainbow – and it does not look out of place – and back to elephant stampede action. And then there’s the sultry and exotic Michiko (Fumi Nikaido) and the brilliant Shin’ichi Tsutsumi, who plays the emotionally unstable Yakuza boss, Ikegami. 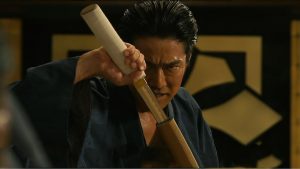 From Suicide Club, 2001 and Noriko’s Dinner Table, 2005 (part of the suicide trilogy) to Cold Fish, 2010 (part of the hate series) and the Guignol inspired Strange Circus, 2005, Sono has come a long way and now his black/red-comedy perspective has begun to creep in, almost crawl under the skin making the viewers experience the brilliance of the pleasing unorthodox. 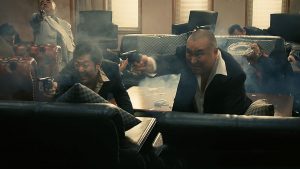 Sono is on a roll.