A young man breaks into a nurse's rooming house and one-by-one kills off nurses.
19670 h 56 min
Click an icon to see more

Another ancient Pinku from Japanese Pinku eiga pioneer Kôji Wakamatsu, which tells us the true story of Richard Speck, a serial killer who murdered eight student nurses staying at the dormitory of South Chicago Community Hospital.

The Handsome Boy (Juro Kara as the antagonist) is shown being dragged in by the students in to their dorm to witness an act, which, it seems comes across as poisonously deviant sexual play to the inhabitants. This was 1967 and most people were slowly becoming aware of the politically incorrect consequences and an unacceptable act of deriving pleasure from where pleasure should not be derived, for the same reason the public transport had words like patrons segregating men and women from other men and women. The Sixties was like an inordinate/bad acid trip, a giant swinging orifice pendulum, or a hole in the soul; for that matter. 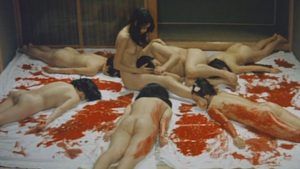 Kôji Wakamatsu (United Red Army, 2007) shoots his film with extreme closeups. His camera lingers on the actors and their rather shocked beyond acting reason reactions for what seems like an eternity, until one of the students offers herself after Pretty Boy has snuffed out a couple.

Although belonging to the Pinku genre and hence associated with ultra-violence, the viewer does not get to see the torture or rape or mutilations on-screen, except very little; however the black and white aftermath and the masterful, peremptory and imposing cinematography by Hideo Ito (In the Realm of the Senses, 1976) throws the dread on to the viewers’ faces, making them experience all illicit emotions that the mind can possibly muster after consuming the stark, graphic visuals. Plus one of the scenes does not let the viewer predict the disgraceful and hard to imagine violation of a person with a German Luger.

With a short running time, the film could have been more provoking in its losing hope in the face of Psychosis narrative if not for the static direction by Wakamatsu, which does not provide any significant message or any themes of psychological horror. Wakamatsu simply fills his film with unrelenting obscurity resulting in hanging on to the tenebrosity of his resume and failing to get across or through to the audience of this 57 minute mind-fuck. Mindless mind fuck.

With a single set- piece claustrophobia approach; gracious nudity; extreme closeup of a variety of female nipples; proceedings that yield no result other than to shock; glimpses of brilliance (yes, there are moments but just those) and a dreary pace, which ends almost abruptly, this Pinku eiga is for Wakamatsu fans and curious and bored nug-run stoners, pinner-men like myself. 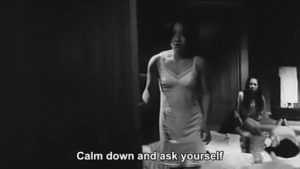 I was still bored after the cavalry arrived and failed to save the day nor the film.