Fear will find you.

As a mother and daughter struggle to cope with the terrors of the post-revolution, war torn Tehran of the 80s, a mysterious evil begins to haunt their home.
20161 h 24 min
Click an icon to see more

“The winds refer to mysterious, ethereal and magical forces, which can be anywhere. Where there is fear and anxiety the winds blow.” – Saeedi; People of the Air 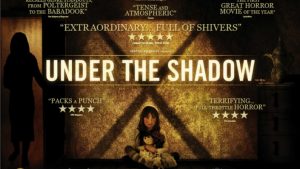 Speaking of fear and anxiety; the emotions haunted the people of Tehran, the capital city of Iran during the longest conventional war in modern history, which lasted from 1980 to 1989 and resulted in millions of civilian casualties and it reached its bloody peak as the Iraqis initiated sanguinary campaigns involving chemical weapons (the Halabja incident, for instance). Using the war as his backdrop, first-time feature director Babak Anvari sets his picture in an apartment complex in Tehran, which the radio says is mere days away from being levelled to the ground, pulverised, once the missiles are launched from the enemy’s side. He uses a family unit to tell his ghost story, he also uses the camera quite indicatively to implicate and scare and make the viewer uneasy throughout the mighty fine, mighty scary film. 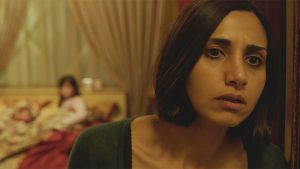 I stumbled upon the film on a movie-streaming site and I literally tripped on the plot contrivance, its stratagem startling me with my own reaction as Under the Shadow puts the meaning back into a family unit haunting with the help of a linear contemporary atmospheric anthropology where neighbours start evacuating town, one by one, leaving our protagonist and her daughter all alone in the apartment complex. A slow-burner, Under the Shadow or Zer-e-Siyah (Persian), begins with a heart-breaking rejection followed by the urgency of an air-raid or the missile incoming warning sirens going off, where all occupants of the housing-complex take shelter in the basement, which serves as a makeshift underground bunker. 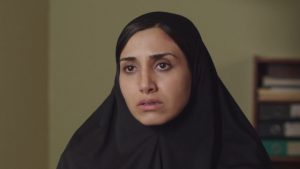 We make the acquaintance of the tenants and the landlord, Mr. Ebrahimi who has brought in an orphaned child to live with them. Mrs. Ebrahimi is highly suspicious and weary of the boy who is a mute. “This is not One Thousand and One Nights; the djinns (demons whose roots can be traced back to Abrahamic religions, especially Islamic mythology) are for real.” She says this to the sceptical and lovely and a full-bosomed Shideh (Narges Rashidi) when she meets the landlady to tell her that the boy is scaring her daughter Dorsa (Avin Manshadi) with his stories of the djinns and what not. Upon discovering something about the boy, she is perplexed even more. She is also in guilt (one of the agendas to further the screenplay and lock the bottom drawer) and extremely upset upon hearing that her physician husband (Bobby Naderi) is being drafted off to a front where the conflict is most concentrated and the chances of returning alive are minimal.

The film mentions something, which hints at the paranormal ten minutes into the film while a family drama is in full play, complete to the husband-wife skirmishes and blame projection, taped windows (a shot we keep returning to as Shideh and before her, her husband are shown sticking duct tape onto the windows so they don’t shatter with the impact of a blast), suspicious minds, Jane Fonda Workout (Warzish) video, the VCR ban, the moral police, a missing doll, the reticent boy who does speak after all, asking Shideh about her daughter’s doll and whether she has found it yet or not; the phenomena of the djinns, first taking the belongings of the characters before a full blown onslaught of some really frightening paranormal activity, dream within a dream, the witching hour, a delightful jump-scare, the 90 degree camera tilt as Shideh wakes up from a bad dream only to be shaken out of slumber again as the camera aligns itself fully with the horizontally placed bed. Then there’s the missile that does not go off (much like The Devil’s Backbone, 2001) but tears a gaping hole in the roof of the apartment, a crane lifting the missile carefully, the air-raid siren – this time louder – going off as if there is no tomorrow; perhaps there really isn’t any in war torn countries. 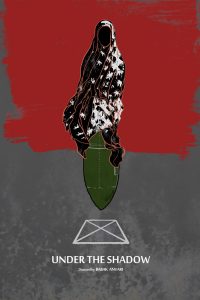 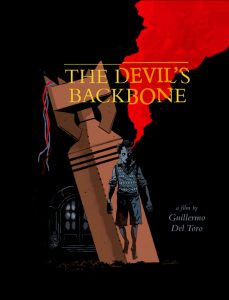 As stated before, the windows are constantly being covered with duct tapes, making an X. Director Anvari keeps showing us visuals of Shideh putting on the tapes as if trying to reinforce her diminishing sense of security and what she thinks is stress related encounters of the fourth kind. I did not know that a piece of hanging tape, which has come off of the window, would generate feelings of such terror in me, and then the bed sheet turns into a woman, sending chills down the spine and making the hairs stand on the back of the neck. 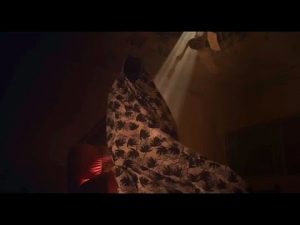 Time for a doobie doo

Shot in Amman, Jordan, Under the Shadow is a well performed, craftily directed, genuinely tense, superbly-paced & a top-grade horror film, which depicts a country that has not witnessed peacetime in a long while, yet a subculture refuses to be restrained and comes pouncing at us from all sides in films like this one and A Girl Walks Home Alone at Night, 2014. 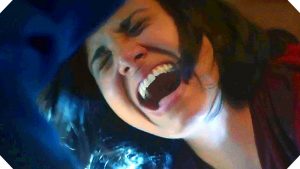 I was scared and edgy throughout the 123 minute run-time, and that’s saying a lot, plus the ending hammers the nail all the way in and you feel immense pain until there is nothing left to be felt, except for a shot of a book lying in rubble, with the wind making its pages flutter.