Martial law is declared when a mysterious viral outbreak pushes Korea into a state of emergency. Those on an express train to Busan, a city that has successfully fended off the viral outbreak, must fight for their own survival…
20161 h 58 min
Click an icon to see more 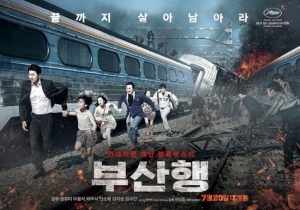 “Yung Il-gil. Nice name. Always helping others instead of yourself. Why did you live like that? What was the point? So stupid.” – Jong-gil

With a accidental deer hunter, road-kill opening-sequence to an unnatural transformation in quick, smooth transitioning of a jarring scene where an animal gets to its feet after being hit and run over by a truck and a very strings arrangement title introduction/placement, Busan is fierce, unforgiving and completely feral; it pounces at you with the rage of a lioness whose cub has been threatened. 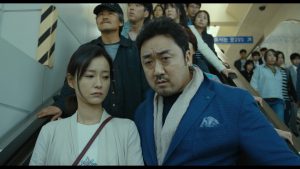 Whenever I think that the South Korean films cannot get any more shocking, blood-curdling, menacing, I’m proved so wrong that an entire night goes away without even as much as a blink and not just because of the terror.

An infected lady rises from the metallic floor of the train-vestibule as the undead when the stewardess is attending to her with her head turned to look in the other direction, while the KTX speeds its way to various destinations, including Busan. That scene sent a chill up my spine despite having watched a zillion zombie flicks. The way Yeon Sang-ho (Seoul Station, 2016) handles the moment is strange enough for its raw, visceral and enticing visualisation and the pure energy that runs throughout the stunning film. A film that lurches at the viewers from all corners, in the confinement of an inter-city transport train. 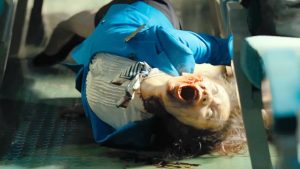 The panic takes time to build, but once it settles in with a dense, full of trepidation score, the viewer can’t help but curl up into a ball and take a peek at the well-built characters from under the pillow. The protagonist (Gong Yoo) is basically a corporate asshole travelling with his daughter to see her off at Busan, where the mother lives. Then there’s the pregnant couple, the school kids, the businessman, the hobo and the Rabid zombies, who transform in mere minutes and come running towards the screen. Oh yes, they can run. Damn, they can run. 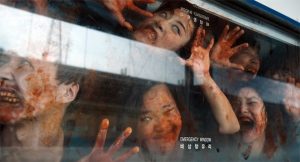 The scenes of zombie encounters have been dealt with immense energy, the spasmodic transformation and the ravenous attacks, the unnerving underlying themes of survival, brittle stratagem, sacrifice and the realisation of helplessness in the face of imminent death or transformation is what makes this an all rounder. A fantastic genre creation. 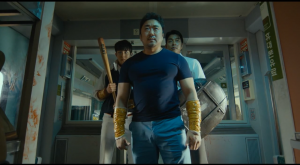 Yes, there is a gear-up montage scene in here, simple and effective and ‘bite’ proof

The film goes a step further than its own reputation as a zombie movie and questions the giving nature of Man as bloody spittle swings from the mouth of one of the infected as she shakes her head violently before jumping an old lady. 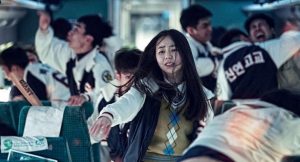 Train to Busan is replete with a wildly innovative act after act; 100 percent genre enhancers. There’s the choppers and the undead falling off them, breaking bones and still managing to run like motherfuckers. The entire sequence of the Daejeon Station is a visual instruction on ‘how to make zombie films for dummies and Brad Pitt‘. The phone call and the corporate asshole’s mum on the other end, transforming; Ma Dong-seok, the sacrifice, the semi-nihilist form that the film has taken, the PA system announcements and a poetic death all add up to a highly effective and a well made, top grade zombie film that keeps the viewer on the edge of the seat, until there is no more seat left. 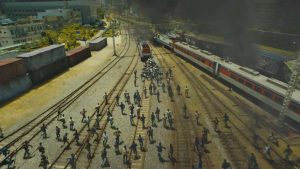 One of the best scenes in any movie, ever