A computer hacker's goal to discover the reason for human existence continually finds his work interrupted thanks to the Management; this time, they send a teenager and lusty love interest to distract him.
20131 h 47 min
Click an icon to see more 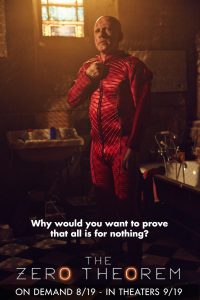 Yes, why in the Lord’s name would anyone wanna do something like that? Why? Well because it’s Terry Gilliam – Of course

This is a film where it seems director Terry Gilliam has come full circle in a theorem of personal existential angst, which started with Brazil and was hinted at in 12 Monkeys. This is a story of reclusion, isolation, entity-crunching, an autophobic genius, the antisocial cripple in a box, shrink-in-a-box, fifteen year old algorithm prodigy ordering pizza in a box, delivered by women wearing latex and told through the fantastical mind of Gilliam whose set designs look like a grand theme park, complete with the ornamented yet rustic horror house milieu. As a matter of fact everyone’s wearing latex in the background. Meow!

The wardrobe used, has already won an Oscar for best costume design back in 1995/6 for 12 monkeys – here the transparent jacket is used to enter the NEURAL NET MANCRIVE.

Of plot there is very little, of eye-candy there’s plenty: neon colours, bright yellow or blood-red latex overalls, the Jester suit – complete with the tentacled hat – shiny cleavages; so much so that when our protagonist goes to a party (reluctantly, to a Terry Gilliam party? Sure) dressed simply in a suit and tie he gets attention, from the fashion gurus present. The Village people like how he dresses, the suit and tie is an ancient yet riveting concept to them. 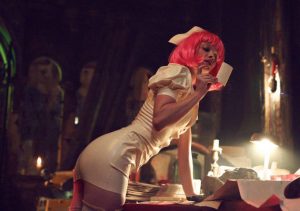 The film tells us a story we have become accustomed to. Yes Pi, 1998 pulled us in with its wire-clutter of a brilliant plot, Theorem simply expands on that idea in a future that we have seen before, also; albeit not exactly like this. This is Gilliam’s future and if Brad Pitt wants to jerk his head and act all cuckoo, all the way to free animals, or for that matter if Christopher Waltz wants to work in the nude and look like a neurotic gamer freak or just a freak; they can very well do it. Plus the Jester has been waiting for a symbolic phone call since before the film was even conceived in Gilliam’s head. What could that be? 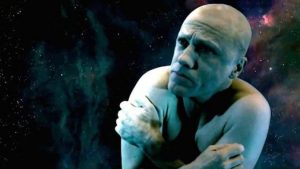 Star Child – Kubrick left a mark, yessir he did.

What is with Gilliam and evil fathers and gifted children who come to the rescue of the tortured artist by half time?

Tilda Swinton seems to be losing her wits with reality in every recent film she’s done. Last I saw her, she looked like a eye-wear commercial for cross-dressers and was trying to stop a rebel uprising in a very fast train. To each his own. 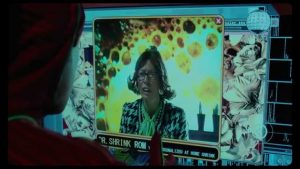 Now she’s in a ‘very fast’ computer algorithm, with a forward bite and all.

Waltz is wonderful yet confused. Yes, the latter comes with the character but there are moments when you just might see a clueless look in those piercing eyes. The profligate and gratuitous feel of the film and the meek but highly complex, convoluted, abstruse, enigmatic and Delphic character of Waltz’s Quohen Leth is what keeps the keen viewer going, among other things. 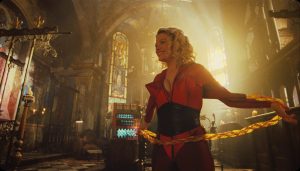 Theorem is entertaining in most other areas as well and it’s pretty funny too. The Zero Theorem is a great film, however Gilliam could have used a veteran instead of an English teacher, Patt Rushin to pen the story. The screenplay lacks the confidence of films like Fear and Loathing in Las Vegas, 1998 and The Imaginarium of Doctor Parnassus, 2009‘.

Did I read ‘philosophical treatise‘ somewhere? Oh, for fuck’s sake. Interstellar is out on Blu-ray and DVD and VoD, maybe we can use such fancy terms after watching it fifty times. Plus Gilliam loves Orwell, we get it. 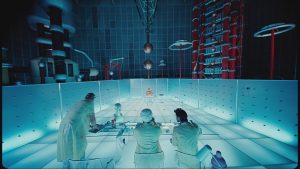 Well, everything said and done, I may or may not watch this one again. No matter what the decision, the line below hit very close to home:

“Everything adds up to nothing, that’s the point.” 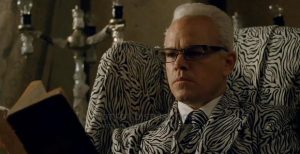 With everyone trying to get Matt Damon out of a sticky situation of late, somebody please come to his rescue and get that God-awful suit off him.

One more thing, we love the management.