The World of Kanako

Showa Fujishima is a former detective. One day, his daughter Kanako, who is a model student, disappears. To find his daughter, he investigates more carefully into his daughter's life. He quickly realizes that his daughter is no saint, but there is nowhere he won't go to find her.
20141 h 58 min
Click an icon to see more 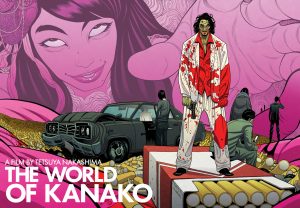 The film starts with a quote:
‘An era is only confused by a chaotic mind‘ – Jean Cocteau

Director Tetsuya Nakashima takes that quote extremely seriously and adapts a novel by Akio Fukamachi to make a film that jumps not only timelines, with very little information on the screen; except maybe the time of the day and the month and date, bit it also jumps timelines within timelines. And if that was not enough a scene very early in the film puts the viewer completely off tangent, trying very hard to put the pieces back together when our unlikely, bipolar, lead; a former detective Fujishima (Koji Yakussho, the bad ass leader of the totally bad ass 13 Assassins, 2010) is thrown into an abyss of devastating revelations, the literal breaking of the family unit caused by a bunch of mind-shattering Polaroids; revelations so daunting that could tear any man in to tiny little shreds of paper. However, the former detective has the will of a… errr… bipolar (trust me) and will not stop at anything; even if that means facing some of the most unpleasant and hideous demons materializing themselves through the eyes and tantrums and plain ol’ psychosis of the dishevelled, pill popping and dressed in a white suit, Fujishima. He does not leave any stone unturned in the search for his daughter Kanako. He should’ve left some closets be. I mean it only results in an even more challenging watch after daddy finds out that his innocent little princess is missing. 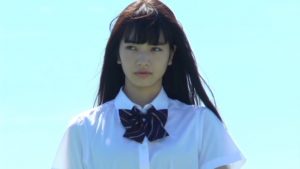 Convoluted and filled with dialogues that hint at everything from incest to rape to homicide to a meth/crack-kit found within Kanako’s belonging’s, which she left behind before she vanished.

The revelations are horribly unsettling. Just like the grim cinematography that keeps getting out for some sun but is called back in to take a look at a picture, see if you can identify a certain man in a certain Polaroid. Hint: Muto. Plus the background score, Free Fall sounds much like House of the Rising Sun, adding to the dark, mahogany mood texture of the film. 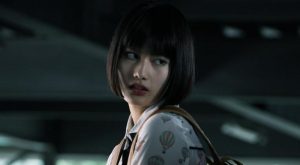 High-school. Extremely high-school; suicide (the significance of taking one’s own life is immense in traditional Japanese story telling), for the most trivial and most horrifying reasons, making the blood run cold at the slightest whisper of “I love you”.

Cold yet awkwardly comforting on occasion, a regiment of anti-psychotics, the constant deciphering of what is being shown on-screen, not just by the viewers but also the performers, who look real-deal furious and lose all sense of morality when they do not know where to go, or who to turn to; after running in to many chronologically impossible scenes to shoot and keep track of. It all turns out to be first-rate film-making. Perhaps even glorious in its lack of scruples and the fact that the film shows a crack, bigger than the San Andreas Faultappear in the beginning of the film when Kanako is being doubted as a regular teenage girl with a highly garbled perspective on life. Or whatever is left of the perception by the time. It is revealed, that the plain-looking Kanako might be the devil herself. Not for her father though, who accepts her (although with the help of intoxicants and a puncture or three from his own daughter’s drug kit) but not without morbid thoughts clouding his already impaired judgement. 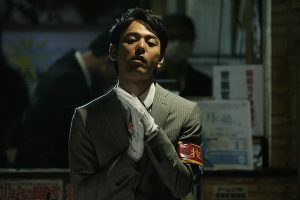 The performances are astral. Jun Kunimura is here (the mood-swinging boss from Why Don’t you Play in Hell?. The prostitution/narcotics gang/ring members are more than just convincing. A character in the film, it seems, is put there only to grin and flash his teeth at Yakussho, mocking him throughout, calling him Oldman like Oldboy, perhaps? 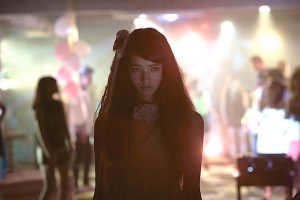 He should be mocked at. His condition made him leave his family and the last time he spoke to his daughter was when she was still in Junior High. Turns out, a little heart-to-heart may (just might) have saved the whole family from a lot of trouble and the completely oblivious mum’s dependence on alcohol.

“Is this her boy friend?” Fujishima pushes a picture in to his wife’s face, she recoils while crying all the time.
“No… I don’t know.” She is cowering as the menacing Fujishima moves closer.
“Do you know where she goes after school?”
“No…”
“Did you know about the drugs in her school bag?”
“No, sniff sniff sob.”
“THEN WHAT THE FUCK DO YOU KNOW ABOUT YOUR DAUGHTER?”
“Our daughter.”
“What? What the fuck?” He raises his hand and then walks out.
Somewhere in between a custody battle is also hinted at, probably to justify the exchange above. 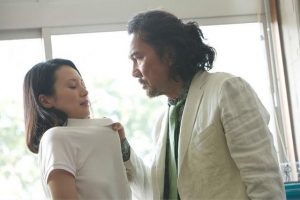 There is prop blood used in the action scenes, plus there is also Manga animation and stills of comic-book, hand drawn blood splattered walls, which make their appearance when the offensive is cringe inducing.

Even the opening credits are part live action and part Anime, with a strong “I like the way you die, boy” feel to it, by characters being introduced in still, closeup, stylized shots.

I’ll confess, I got lost in the maze that is Kanako by half time mark. I had to pause, get some fresh air, try to search for the story on the web and when I did find a detailed synopsis, I shut the window. I’m strange that way.

The non-chronological narrative could have been even more hard to decode, if not for the astute editing by Yoshiyuki Koike (Confessions, 2010) and the depth given to even the smallest character for the viewers to recall in the multiple timelines the film runs through. Even then, this viewer got lost in translation. It could be the brevity of subtitles or the fact that the characters speak in the most symptomatic manner, confusing things for themselves, intentionally, to hide from the truth or lurch at it from behind the bush and take it by surprise. 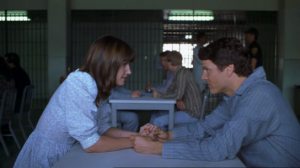 Bad decisions, horrific suggestions, narcissistic day dreaming, violent (not just by slitting throats but also by tearing out the hair for us) with its over-the-boss-of-the-top plot. Highly disturbing, yet dangerously desirable and highly intimate.

The World of Kanako or Kawaki (Thirst? For Love?) is not an easy watch, not because of its violent visuals but in its depiction of psychosis boiling over, in its telling of the story of a girl whom everyone speaks of but no one seems to know, besides Ogatu.
Plus, standout and highly cryptic and laid-back performances by Mahiro Takasugi, Munetaka Aoki and the other members of the Apocalypse Gang that are extremely perspicacious and high-grade facial distortion on both sides of evil, make Kawai an uncomfortable watch with some really fucked up schizo darkness being brought out in to the open for the first time in years. 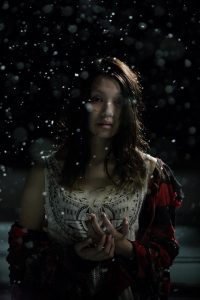 If I had not watched Oldboy and Dogtooth and Miss Violence before Kanako, I would probably have been shocked outta my red striped socks.

Whew. I don’t know if that makes any sense but approaching the movie with all the conditioning and false sense of morality seemed impossible. To write about it was something that I had to really think of before I typed the first words and then got trapped in a huge ass bear-trap, which is the review, from the POV of someone trying very hard to get the brutal contraption off his ankles. However, every movie goer knows, bear-traps are symbolic for an untimely demise of everything, including reason. 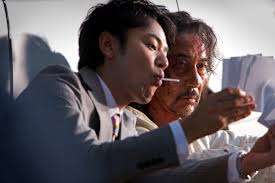 I am tempted to write a must watch, but let me watch it once again to endorse the film with genuine appreciation and understanding. 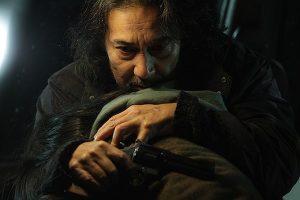