A stranger arrives in a little village and soon after a mysterious sickness starts spreading. A policeman is drawn into the incident and is forced to solve the mystery in order to save his daughter.
20162 h 36 min
Click an icon to see more 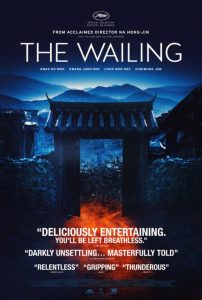 Alright, that was pretty intense.

Na Hong-jin (The Chaser, 2008) seems to have come full circle with his new offing; an impassioned thriller, which once again deals with the protagonist trying to get a handle on something stupefyingly mysterious and carcinogenic.

Once again the hunt to find the monster – which could or could not be behind the inexplicable disease, the frenzy, the boils on the skin and murders that make the blood run cold and not just within the veins of the film’s performers – it takes a toll on the jejune and oversimple Detective Jong-Goo (Kwak Do-won) and his schematic partner and a priest; whose thunderous descent into hell is slow but painfully certain.

Na Hong-jin builds scenes around his carefully fleshed out characters performing on rain drenched sets, scenes that change the tone of the film and also the traits of the character(s) in question. For example, we have the brilliant Yun-seok Kim losing it completely at the police station in The Chaser, where the alleged killer is kept in custody. It is from there that the downward spiral starts for the ex-detective/pimp. Here, the horror-struck cop, Jong-Goo, isn’t always like that but becomes petrified and extremely superstitious after witnessing the aftermath of a horrendous crime involving the Police Chief and his family and after stumbling upon a shrine with photographs of people shown in various stages of a rather hard to watch, skin disease. The magnitude of the situation is seen through the sickness that spreads through the village like rabies. It is witnessed through the characters as they fall victim to an unknown evil and through the narrative of the film, which puts forward a straight-arrow investigation and then bends the arrow, almost breaks it by smashing it on the knee, when/where peak humans collide. 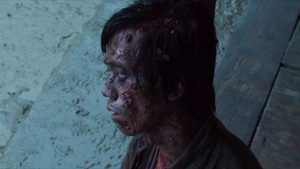 Spinning a web of deceit through a plot that asks more than tells, Na Hong-jin baffles the viewers with black magic, isolated shots of The Stranger from Japan (his passport says he’s from there), The Stranger assaulting a woman pretty close to where he was shown fishing at the start of the splendidly horrifying feature; the introduction of The Woman of No-Name and the details she has to share with Jong-Goo, The Hunter‘s encounter with an extremely feral stranger and the shot, taken from below the subject, that shows the creature just as he reveals himself from behind a tree (how Predator). Na Hong-jin derails the viewers’ thoughts by shots of The Stranger producing a modern day passport and telling the cops that his reason to visit Korea is Youko (fox spirit in Japanese folklore). Even the parts of the translator/priest are running alongside the film, not within it. It is when the two courses meet that we know something dreadful is about to happen or has already happened. For instance the first shot from the film after the opening narration, where the Japanese stranger is sitting in a boat surrounded by calm, and puts the bait into the fishing tackle is in complete contrast to the tone of the film that resonates with the frenzied dancing and chanting of a shaman performing a very loud ritual to drive away the evil spirit from Hyo-jin (the cop’s daughter). The texture balances itself out for the viewer when The Priest goes looking for The Stranger on his own, even after witnessing what he must face at the Japanese man’s secluded hole in the mountains. 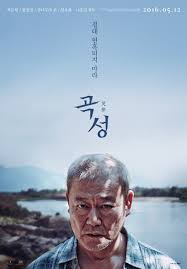 There are a million ways a viewer can interpret this film but only one way out of it, with reason still intact; watching the ominous film and consuming everything it has to offer, without questioning the motives behind the viewing nor the way the film morphs into a bone-chilling horror film; a film that makes even the fairly well-made Hollywood horror flicks feel “clunky and devoid of any morbid imagination“. This is quite a peculiar film (I need not mention that) that had me staring at the screen in sheer disbelief and terror; a single sequence which could’ve easily turned into being ridiculous but the only ridiculous thing about Goksung (also the name of the afflicted South-Korean village where all hell breaks loose) is the way it gets under the skin and makes you want to frantically check your belongings (down to the hairpin) towards the end. 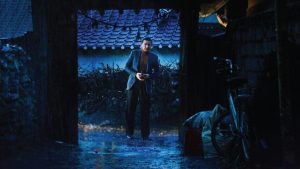 Goksung is not at all as complex as various discussion forums have made it to be. Neither is it a film with an accessible narrative. The Wailing does not want to be deciphered, it simply wants to take the viewer into the heart of this curious amalgamation of acquiring faux-relief from most unexpected scenes and the overall Daedalian theme of this truly scary, unorthodox thriller.

An absolute must watch.