Man is The Warmest Place to Hide.

Scientists in the Antarctic are confronted by a shape-shifting alien that assumes the appearance of the people it kills.
19821 h 49 min
Click an icon to see more

First things first; this is not a film for dog lovers.

An edit, about twenty minutes into the film changes the tone from alarming to hardcore impending doom. Then the scene fades to black as Dr. Blair looks down at his papers and the terrible statistics on them; in the event of the creature getting out of the isolated facility and straight into the masses. This cements the trepidation in the viewers’ minds; not because of what it can do outside but what it has done in the isolated research station – what the fuck happened to the Norwegian camp? Why was the guy in the chopper so hell bent on killing the dog? Now, after thirty four years it seems all (very well) said and done, but back then audiences were scared witless even before creature-show n’ tell. A macho, MacReady (for Pete’s sake), dingus party, crude, almost B-grade Aliens was happening all over again, however with a more homespun mindset and with Carpenter at the simple yet nerve-rattling orchestral arrangements again. Goodness.

Then suddenly The X-Files happens, boom; we have visual of a spaceship buried billions of years ago. Again, I can attempt at sarcasm but it must be read seriously for the film does not give relief throughout its 109 scary as fuck minutes, even when R.J. MacReady (for Pete’s sake) has burned the shithouse to the ground. It must be taken seriously for the film has aged masterfully well with its famous creature design, to its silent tracking shots of long corridors where we watch Kurt Russell run in delirium, to its unwrinkled and melancholic cinematography by the Carpenter regular Dean Cundey to the creature effects by Rob Bottin and Stan Winston to the stop motion, which is smoother than witnessed in Robocop, released five years later. No disrespect meant to Part Man, part Machine… You know how it goes. 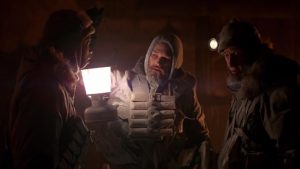 Anyway, so this John-Halloween-Carpenter guy is a genius who knows how to scare the fire out of your loins and make you all uneasy at the sight of some random image. This man scares you with everyday things. The Thing makes us weary of ourselves, I suppose it is for the themes of paranoia and distrust smoothly flowing beneath the surface. Just watch Bennings and his antics carefully and you’ll see.

We have a Karl Marx Snake Plissken, we have Smirnoff, we have die-hard researchers, survivalists, isolation, below forty fucking degrees, J&B Scotch, corpses, a shitload of them by the forty minute mark, John-Dark Star-Carpenter builds up slow with violent hiccups, which create the illusion of ongoing brutality but hey, it’s just men tying each other to the sofa. Does not sound right at all, but looks great.

Then we have the performances; Norris stops in his tracks to immaculate timing and reaction, the look of resignation on MacReady‘s (for Fuch‘s sake) face reminded me of Brad Pitt from Se7en. Pitt was still playing with his Joes when Russell was playing Snake Plissken. The acting is a notch above the B sensitivities of the film and thus makes it even more serious and sombre; take a close look at the scene where the name, The Thing is given to the creature at about the one hour mark.

The nights in the film have a mood of their own. Sometimes they’re a luminescent blue, at others a fiery orange and then grey with a slight tinge of green; decay.

All praises aside, we know this motherfucker, Assault on Precinct 13 guy is one smart sob when R. J. Macready (oh for heaven’s sake) plays God and gets it all wrong. 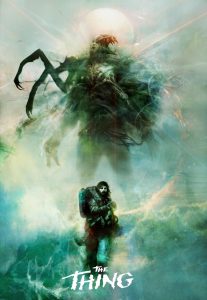