A fashion photographer is traveling to meet his sister at Eden Parish. Once there, his friends begin to film interviews with the Eden Parish inhabitants, all of whom speak of the commune in glowing terms. However, they soon discover that there is a sinister edge to the commune that belies the seemingly peaceful setting.
20131 h 39 min
Click an icon to see more 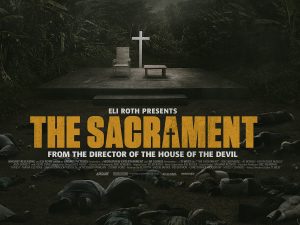 Definitely one of the better found footage films to come out since [Rec]’, 2007. However this one is nothing like the latter, it’s more menacing and tormenting in its telling of human nature and the need to have the approval of the man in power, and not the zombie in power.

If the keen viewer is familiar with the case of Jonestown and the Kool-Aid solution tragedy in Guyana, South America, the film does get personal. Do not worry even if you do not know about Jonestown, because this film shocks in many different and convincing ways, despite the lack of a lesson in history. 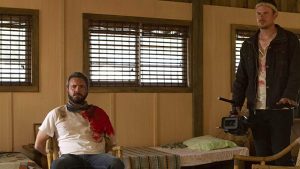 The acting is right-minded (i mean we’re talking mass scale brainwash here), and the direction is pretty decent for a found footage film. The only problem I had with The Sacrament was that Gene Jones (Father) looks a lot like John Goodman‘s Walter Sobchak from The Big Lebowski, 1998. Just saying. 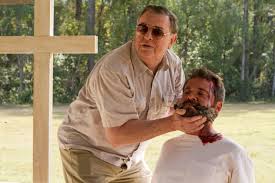 If collective paranoia, consciousness and the control of both is what you desire to watch, this is your film, sadly based on events that did actually happen in all its horror and the depravity of one man with great communication skills and a platoon of body guards brandishing shiny, menacing Kalashnikov rifles.

Do not be mistaken, this can happen to anyone.