Not rated yet!
Click an icon to see more 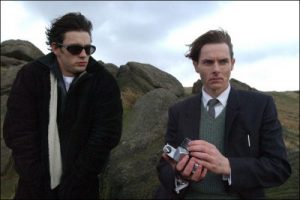 The Moors Murders of 1965 are probably one of the most chilling murdering sprees in history, that not only shocked the area of Greater Manchester, snatching away their innocence and sending a jolt of terror throughout England, but also the rest of the world, as the newspapers’ headlines kept getting bolder and shouted a woman’s name. Not just that, the police and the CID, the victims’ family members, hardened detectives, the DCS, the psychologists, the defence squad that consisted of Parliamentarians and a members of the Queen’s Council and the prosecution team led by the respected Baron Elwyn-Jones and the Judge, Mr. Justice Fenton Atkinson stood (or sat) in utter disbelief as the details of the crimes unfolded in a court room suffused with the families of the victims and the public alike, for the most sensational trial of evil beyond imagining.

Director Christopher Menaul (Summer in February, 2013) and writer Neil McKay (In Denial of Murder, 2004) tell the harrowing tale of the murders, pure evil, psychosis, emotional dependence, fragile constitution of the brain, acceptance and control disguised as love, childhood trauma (where Myra Hindley tried to save her only friend from drowning and failed), Nazi propaganda, the fiery discourse blaring out of ancient turntables, reading Juliette by Marquis De Sade, abandonment, the Übermensch fantasies, recording the murder and torture of ten year old Lesley Ann Downey, Polaroid mementos (trophies that turned out to be highly incriminating, leaving no room for acquittal or even parole and the story of one woman who transformed from a kindly, big boned and a caring individual to a heartless, vicious killer of children. The filmmakers bring the appalling, horrifying and outrageous true story to the small screen in the most subtle and sombre manner. 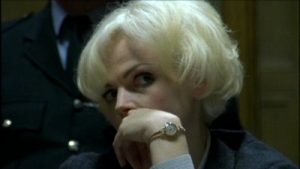 Recreating a worn-down, Manchester of the Sixties the washed out look of the film captures the post war condition of a city trying to put itself back together. The period piece is almost uncanny to watch. It is as if the filmmakers travelled back in time to shoot the film.

Menaul directs with a certain calm. However we all know through the characters that he is everything but that. Starting his film in 1964, when the murders were in full swing; Menaul holds our hands and takes us on a ride to the Saddleworth Moors, whose calm and picturesque scenery conflicts directly with the constant brutality of the murders, which are only spoken of (expect one).
The writing focuses more on the victims’ families and mainly Myra’s sister, Maureen Smith and her young and impressionable husband David. Plus the writer-director team fill their film with scenes of the trial (which could’ve been built upon some more), and the conversations that take place at the apartment of Ian Brady. The horror of it all is fully realised when we are shown the couple picnicking on the grave sites of their victims. The costumes for Ian and Myra have been recreated from case file pictures (taken by Ian and Myra themselves) and they are exactly like the real deal. From Myra’s tight pants and boots and dyed hair, to Ian’s immaculate dressing sense, his sunglasses and the QL17 Canon camera. 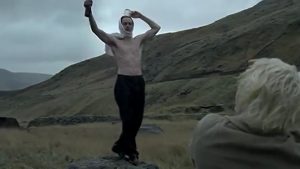 The location shoots are grand and tragic at the same time. The interiors of the small apartments are reproduced to look exactly like the ones found in the lodging of the murderous duo. Sean Harris (Deliver us from Evil, 2014) plays Brady to uncanny perfection; so much so that when he makes his appearance for the first time, the scene sends chills up the spine before he has said anything. Maxine Peake (The Theory of Everything, 2014) is most effective as Hindley, vacillating between the cheerful and emphatic Myra, to the murderous, aloof, confused, in-control, angry and a hopeless child killer.
Having said that, the infamous mug-shot that sealed Hindley’s fate forever, comes across as flat in the face of the real thing. Nothing can beat the mugshot that immortalized Hindley.
Joanne Froggatt as Myra’s sister and Matthew McNulty as her husband, along with the rest of the cast contribute to the film in the most powerful manner by immersing themselves fully in to the minds of their characters. For instance George Costigan as Detective Chief Inspector Joe Mounsey is superbly nuanced and improvised, complete to an unnoticeable but a highly potent wink. 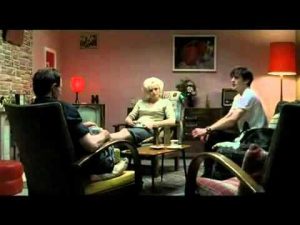 There is something more sinister in this tale than all Moors murders combined. An audio recording and photographs of the rape and torture of the ten year old Lesley. We are shown the actual spools but we do not hear the recording nor do we get to see the pictures; further proof of the filmmakers not taking the easy way out, neither exploiting the horrid events and maintaining a similar tone throughout the 180 minute run time. Search parties are shown combing the Moors, graves are hinted at and the display of bodies are out of question, even with a late night presentation rating.

Plus, except for a quick edit murder scene filled with red hue and an imperative for the narrative, no executions are shown nor spoken of in detail. Instead we get an insight into the minds of two of the most complex personalities in history and the lives they affected, including Myra’s sister and brother in law.

What is on the tape?

A bound and later gagged child pleading for her life and asking Myra to take her back to her mommy. Hindley, Brady and the victim cannot be heard, due to legal constraints, however a transcription of the recording somehow made it to the main-stream.

I have yet to read something more abominable, heinous and lamentable than those few pages where Myra Hindley and Ian Brady take their time to murder a child.

The Moors Murders is a fantastic film, an achievement in documenting true crime in a completely unbiased way and without the use of strong visuals, instead focusing on the calm of the Moors and the conversations; scaring the viewers even more than getting a similar reaction if the filmmakers had approached the event in a bombastic and violent fashion.

Myra Hindley died in 2002, while serving life and earning herself a degree to convince everyone that she was just “One of Our Own“. Not many were convinced; their minds taking them back to what she had done with the ten year old Lesley. 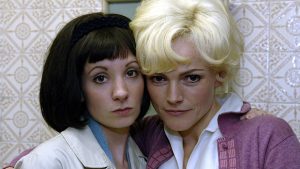 Ian Brady died in May 15, 2017 at 78 while serving life at the Ashworth Psychiatric Hospital. The burial site for Keith Bennett was not revealed by him to the authorities despite different methods of extracting information. The only noted Moors victim whose body is still not found after almost fifty years. I think he simply forgot after so many years and bodies and the dementia that was creeping in since he first started to idealise the Third Reich’s speeches to the German people.

A must watch, and not only for the true crime brought to big screen fans, like Fincher‘s Zodiac minus the perpetual underlying sense of utter and pristine dread.

Maureen: “He hit me too, Myra… I don’t go around killing children” 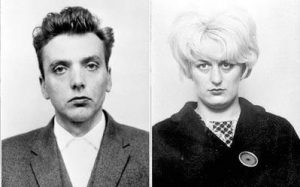