Darryl Revok is the most powerful of all the scanners, and is the head of the underground scanner movement for world domination. Scanners have great psychic power, strong enough to control minds; they can inflict enormous pain/damage on their victims. Doctor Paul Ruth finds a scanner that Revok hasn't, and converts him to their cause - to destroy the underground movement.
19811 h 43 min
Click an icon to see more 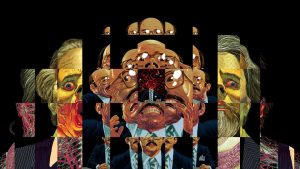 The first thing that struck me about Scanners is how people smoked everywhere. It was nostalgic, being a kid of maybe four, I recall passengers smoking at the back of air-planes. These days they’d send you packing to Gitmo, escorted by SWAT and the ATF and also maybe the army; but in those days one could light up a Camel or a Marlboro anywhere one wanted to. Museums, malls, restaurants, right in the middle of a baby’s first birthday, the maternity ward even in the fucking lung cancer area of the hospital. 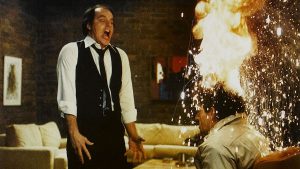 The second thing that struck me was the fact that a villain gets to say, “she’s safe, ‘this is between you and me”. I have not heard that, ever. I may have not watched enough but no ma’am; never ever. 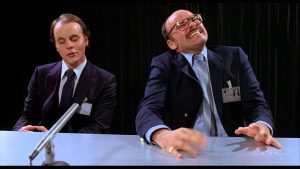 A head blows off, itself, – out of nowhere – during a guards down scene, which results in a jaw dropper. The master is at work here with an aim in mind, a long-term goal whose glimpses can now be seen in Maps to the Stars. Yes, indeed I am drawing parallels between a flawed yet cult masterpiece, flawed to the boom operator’s shadow on the couch to probably one of the greatest mainstream films of all time; in my humble opinion, of course. 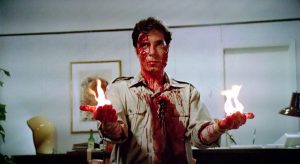 Scanners has an intuitive (by Cronenberg standards) plot driven by mediocre acting by most. Nobody said that was a problem, even if someone did I was busy listening to Cronenberg’s intriguing and fun as hell story. The Nineties’ first choice for the bad guy, Michael Ironside (Total Recall, 1990) is one of the few who pull off the scanning without looking like a poster for Nymphomaniac, 2014. Another actor who underplays her scanning bits, for reasons only known to divas and Sunset Blvd., 1950,  is the beautiful Jennifer O’Neill. 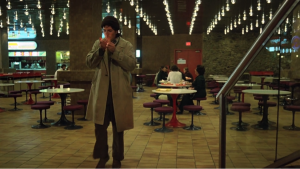 Even with its imperfection, Scanners is a slow-burn-collusion film by a man whose love for the new flesh can be seen here although much like Stars, through the mutated souls represented by a motherboard and collective consciousness, by way of telephone cables that aren’t even fibre optic. There’s a scene where a man searches his jacket for something, with great urgency; at once I thought it would be a cell-phone, it simply has to be at a time like this, in a situation this grave but no, it’s a piece of folded paper. It’s still the Eighties even if it says ‘2018’ on the iPad. 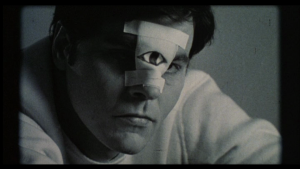 The New Flesh scenes are impressively good for 1981. The serum and one scene with Stephen Lack in particular reminded me of Fassbender‘s Magneto and the X-Men movies. It’s amazing how much one can consume from a film like this. From its misgivings to its masterstrokes. A combination that is made possible by one of the very few men in Hollywood (collaborations) who can make you feel sorry for most disgusting organisms to be presented on screen. 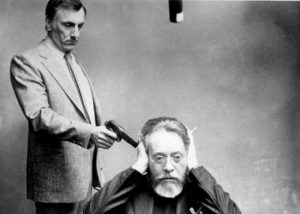 Scanners is shocking, primitive, disgusting, beautiful, smart, full of hamming it. However Scanners is also a very strange and an entertaining film to watch, if not a broken masterpiece. After all what the director would follow this one with two years later would make most stand up and take notice and perhaps also to shrug off the unease.

These days you can’t even smoke in your own fucking bathroom for Heaven’s sake. That is madness.