The city shines brightest at night

When Lou Bloom, desperate for work, muscles into the world of L.A. crime journalism, he blurs the line between observer and participant to become the star of his own story. Aiding him in his effort is Nina, a TV-news veteran.
20141 h 57 min
Click an icon to see more 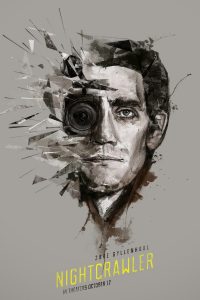 Creepy. Plain old simple creepy. This one belongs to the Elizabeth Arkham Asylum for the Criminally Insane. One look at the still shot of the empty billboard and the freeway, in the beginning, and the entire place gets filled with copious amounts of nothing. A barren land, a body devoid of soul, a man consigned to isolation and oblivion. The will to live broken so many times that it must acquire disfigurement in order to repair itself. 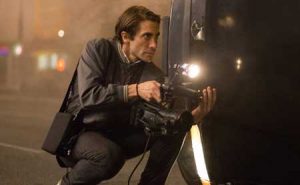 Nightcrawler is the basement sequence from Fincher‘s  Zodiac, 2007, it is Fassbender crawling in human waste in his cell (Hunger, 2008). This film is so dense with transitioning emotions and projecting control that the viewer is actually quite terrified by the otherwise sinfully charming, yet gaunt, and the highly manipulative and cunning Louis Bloom, played by someone who actually had the nerve to take the character head-on and make Dan Gilroy‘s direction (first time) and screenplay worthy of the actor’s massive talent. I look at Jake Gyllenhaal very differently now and with much more admiration than before. 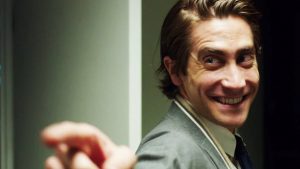 The art direction takes the viewer down with it, as the lights get dim and the air gets stuffy. Listen to Louis talk, watch him say the most profound things, watch him take control and upstage a veteran actor, who holds her own; the beautiful and cold-hearted Nina, played by the ravishing Rene Russo. And she’s not twice my age. 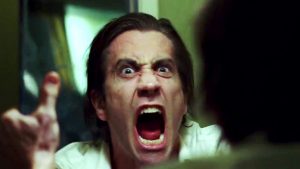 Bill Paxton is jealous of the new guy, and he shows it in his Pvt. Hudson-like mannerism, which is what gets him eaten by an alien every time. It’s all awfully harrowing; Nightcrawler is still doing rounds in my head with its themes of snuff, greed, post-modern journalism:

Also, with all psychosomatic complexities of Louis; performed with impeccable restraint and the precision with which the psychological layers have been kept from making contact; layers upon distorted layers forming deep within the dark heart of our anti hero. 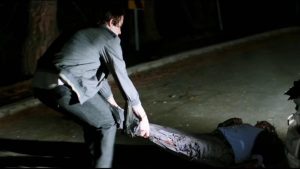 Louis Bloom is drawn and uninviting and also smiling. His light moments are mostly and ironically under authoritative pressure and draining consequences. He looks resigned at the start but strangely keeps rejuvenating throughout the length of the feature as his mind deconstructs and erases certain significant lines, making him confident as a character, resulting in him being resilient and high-headed with the same people whose sight made him cower, just minutes earlier. 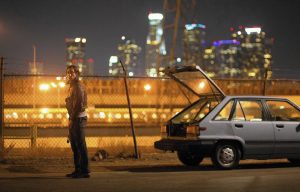 Jake Gyllenhaal is scary as fuck (I am still, after so many years, confused by that association, anyway) as the tortured and perverted Bloom. And the rest of the deal gives him enough space to wreck havoc on a the audience and have the audacity to smile that implicit, very fake and soulless and raddled, empty smile that makes the viewer want to go hide under the bed at the site of a sickly but a seemingly normal enough guy with a video camera and the horn-rimmed shades, straight from the Sixties along with the dark grey windbreaker. 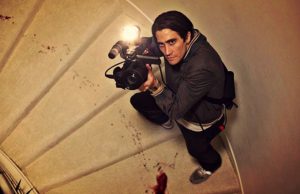 Little things, that give the movie an extra something; perhaps a reference to the period where the dailies shouted the names of serial killers quite often, thus making their trials TV Dinner and eventually making them demi-gods and pop-culture icons with a mass intrigue behind the man in control or the handsome chameleon who bludgeoned women to death with blunt objects (case in point Ted Bundy). I have yet to witness women romanticise misogyny. Only in America.

With a ‘drum solo by Bonzo’-score by the brilliant James Newton Howard, which includes some serious guitar chops of the heavy metal variety, Nightcrawler impresses with its character performances, Gothic visuals and an impending sense of dread. Plus it also scared the living daylights out of me. Double whammy. 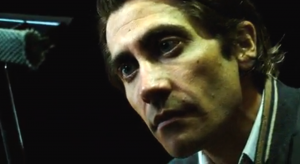 Creepy to the bone.
Damn.
Whew.