A couple's relationship is tested when uninvited guests arrive at their home, disrupting their tranquil existence.
20172 h 01 min
Click an icon to see more 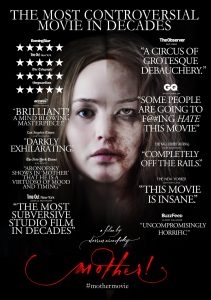 “Exquisite”, as Catwoman says to Mother‘s (Jennifer Lawrence) character.
“That’s smart of you”, as Man tells Mother’s character
“Let me freshen these up”
“MEDIC!”
“The poet says to share”
“Now I will have to look for something else that belongs to him”
“It is for you”, Him (Javier Bardem) to Mother
“They have to leave”
“Their sons are here”
Cain and Abel in evening suits
Offspring of Man and Woman; the first people to enter the house, an allegory for Adam, Divine Creation, Eve and the Whisperer
“Who are all these people?” 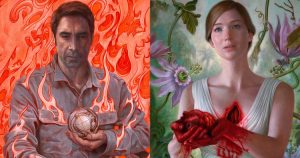 After a long time a film managed to cause a whirlwind of scared emotions inside this sinner-man, building then breaking then building again; not at all a user friendly film but it has Aronofsky branded all over it. Mother scares in sophisticated and elaborate, extant ways, balancing on the edge of madness and Inception, the film, as the texture and dialogue of the film are deliberately made to look and sound like a dream. 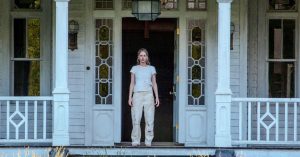 Mother is everything from being a commentary on religion and the contamination of faith to the need to have something bigger than our own consciousness to pray to. Mother is unrestrained in what the director sets out to accomplish. It cannot be trusted, neither can the filmmaker’s motives, which are beyond the reach of the casual movie-goer but then there is nothing casual about Mother; it does not have time for casual. A simple framing of a man standing at the door after his wife has reached full-term in what seems to be just minutes causes too much traction in too little. 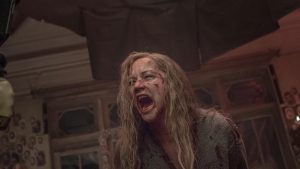 Don’t trust the pedestal, which holds the all consuming glass crystal.

With explosive cinematography by Matthew Libatique and even more incendiary intentions, Aronofsky has succeeded in creating the perfect artist/muse disposition, alignment, in a vicious and skilful manner, rattling the viewers; holding our hands for the first and last time to show us to the door and the peculiarly grandiose climax, where nature has to be corrupted to invite god’s wrath and eventually become part of a larger cycle.

Then we see a deep gash/wound on Man’s (Ed Harris) side towards the ribs when Man is helping Him while he is slouched on the commode, getting extremely sick. This is moments before Woman (Michelle Pfeiffer) arrives?

This is one twisted picture, hombre.

And if that doesn’t have you convinced, the sight of a frog and blood on the bulb and ceiling fill the viewers’ heads with ideas, suggestions, whispers (with an entire character dedicated to it), that pushes the already shaken audience in to an abyss of daunting schemes, hypothesis, the plague and a valuation of self in a similar stitch (not pleasant).

Is mother Mother Nature or is she the Devil? If so, is the character of Bardem some kind of god who cares for this entity so much that for more than half the film he refuses to have sex with her, knowing it would bring about complete annihilation. Additionally Mother never leaves the house and there are no cars or any other sign to give us an idea of how the people made it to this secluded house, deep within the recesses of the woods. The film builds characters out of thin air as it moves forward towards what could easily have become an outlandish climax. However it is here that the director’s timing and film’s sombre, yet a high alkaline charge of a brooding, self-obsessed mood comes to disentangle the intentionally disfigured screenplay; both, the deformation and the all consuming malady become tropes for new attitudes toward the self. Existentialism has found a new voice, face; it has found an entire new Creation in mother. 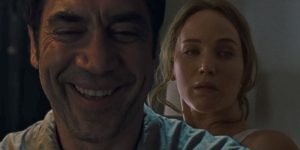 The film, in my humble opinion, is a seminal instant classic. It could have easily taken the The Fountain, 2006 way, but I’m glad it has strains of The Wrestler, 2008 when it comes to handling a tidal wave of radical, intransigent emotions; especially when the pedigree is tainted from the first shot.

This one sends chills up everywhere even when you know there is nothing to be scared of. Or is there?