On the day of her birthday, eleven-year-old Angeliki jumps off the balcony and falls to her death with a smile on her face. While the police and Social Services try to discover the reason for this apparent suicide, Angeliki's family keep insisting that it was an accident. What is the secret that young Angeliki took with her? Why does her family persist in trying to "forget" her and to move on with its life?
20131 h 39 min
Click an icon to see more 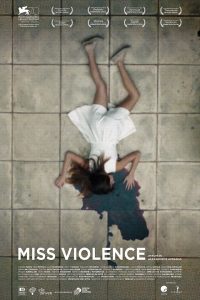 Yet another Greek import, Miss Violence although bland looking like its contemporary from four years earlier Dogtooth, 2009, is boiling with dysfunction below the mundane surface. 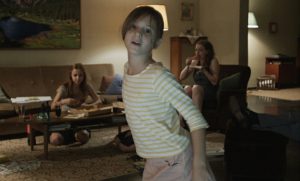 A family prepares to celebrate the birthday of a melancholic, eleven year old Angeliki (Chloe Bolota). They bring out the cake, take photographs, put on lively music. The scene should have come across as cheerful. Instead, the washed out colours and the slow pace with which the camera follows its subjects in long single takes, and the feeling that everything is not all sunshine in this household end up making the viewer unsettled. And the fact that the synopsis, everywhere, gives away the first plot contrivance. A scene made highly distressful by a wide-angle shot of a girl sitting on the balcony railings. And one other element that hammers the reality in, with Angeliki doing a little something startling before she jumps while the festivities continue in the back.

Director Alexandros Avranas, does not give away the character quirks right away. He lets them build through the performances of the remaining household members. The mother who is under a regiment of pills that keeps her psychosis from blowing all over the place, the brooding elder sister who takes a ride to and from her school with Father (Themis Panou), who parks his car under a bridge, every time, after picking her from school. 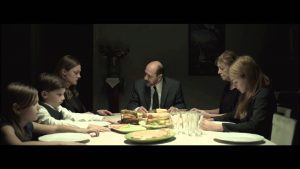 Elini, the mother (Eleni Roussinou) seems to have suffered from severe trauma even before her daughter committed suicide. Director Avranas’s direction is smooth and flows like a river. He reveals the plot to us in small dosages, mainly through silent shots and with moments of (almost) breaking the fourth wall. Thus making the film materialist and constricting our vision.

The anticipation of it is ripe in our heads and just when a crack appears, Avranas moves the camera from the subject, or the actor shies away. The scenes don’t fade to black, the frame just suddenly becomes pitch black with no translucence to let the previous frame/scene fade away. The sudden-death editing by Nikos Helidonidis is one of the reasons the audience remains divided until the third act, or a little before that. 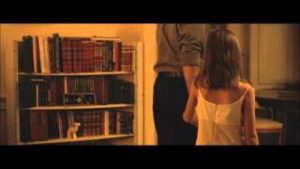 Grandmother (Reni Pittaki) seems intentionally oblivious in the face of blatant abuse of power. Her character seems docile but when its her turn to look us dead-in-the-eyes (with the use of clean-slate framing), she does it just enough to send chills up the spine but not long enough for the audience to grasp her motivation and try and make connections to the once malleable character.

Miss Violence has some of the most subtly executed and deeply disconcerting scenes, something akin to the flash edit death in films. Despite the absence of a score or maybe because of it the film alleviates to the astral and unhinged and mute performances of its actors. Coupled with precise sound editing and the incessant unvarying cinematography, which gives the movie its unremarkable tone; the film starts to pulsate at a subconscious level.

The flavour of the film does not waver from the dull atmosphere, only to let the director shock us time-to-time with acts that require intervention by the authorities. However, the authorities only sense something amiss when the family is falling apart.

A high-grade Greek Tragedy that made this viewer take his eyes off the screen for those few seconds when a despicable act is being shown to the audience. The act itself is not cringe worthy, it is an innocent act, however the circumstances and the plot augmenting the act make the scene one of the most unbearable in cinema history. 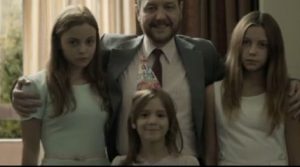 Depraved, dysfunctional, gloomy, shocking, sad and fiery, Miss Violence that bagged three awards at the Venice Film Festival, including best picture and director (Volpi Cup), is an extremely disquieting motion picture, which is an uneasy and a very personal portrayal of ideologies shred to pieces and a family that is determined to take its secret to the grave.

Watch out for the scene when Father opens the fridge and we see the metamorphosis of a chary person into a man filled with sorrow and despair; living an insect like existence. A clean, narrow film that does not spell out the relationships of the family members clearly, resulting in tension mounting throughout the ninety-eight minute run time. Miss Violence hits hard, just where it hurts the most.

Grand, low-key with Helter Skelter playing in the viewers’ heads, Miss Violence is unforgiving and compromises only to give the final sequence an extra oomph. This is film-making at its best.