The Shadow Mountains, 1983. Red and Mandy lead a loving and peaceful existence; but when their pine-scented haven is savagely destroyed, Red is catapulted into a phantasmagoric journey filled with bloody vengeance and laced with fire.
20182 h 02 min
Click an icon to see more 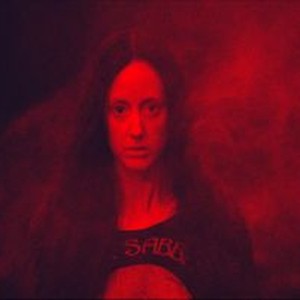 Do not miss Panos Cosmatos‘s strain of mushroom soup, Mandy; Nicolas Cage‘s onscreen breakdown is one of the finest after Harvey Keitel rocked slowly in to the frame, buck naked and passed the fuck off drunk. That was Bad Lieutenant, 1992. The scene in Mandy easily takes the number two spot. And number two because the film is an insane Linus Roache‘s tongue in the unrecognisable, almost as if from VVitch County, actor Andrea Riseborough‘s cheek. The film is barely watchable (but supremely entertaining; gratifying in the way revenge is exacted) with the strobe lighting, with being shot in complete dark, being shot in very little or no light, being shot in the only light source being the passage between the door sill to the interior flooring. 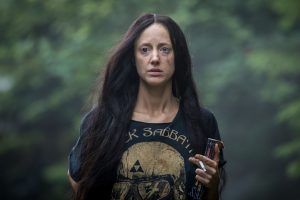 It is all magnificently drugged up and tripping like a motherfucker and all along paying homage to drugs, sex and heavy metal; that other black guy from Predator, the one with a straight razor (Bill Duke), as if he never ever moved on from the Jungles of Cambodia or wherever it was that Lt. Schaefer and his spec ops team of misfits get hunted by an alien with braids and a laser-gun mounted on the shoulder (you’re one ugly motherfucker). 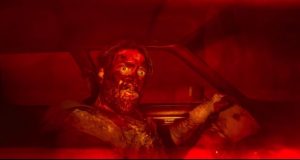 All that and a literal meltdown of Cage throughout the short running time of this ultra violent revenge thriller/horror, which exists in its own private Manson Family hell, make Mandy an exotic, sullen, colourful beast where the camera pans in so close in to Cage’s face that it melts. It actually bloody well melts. 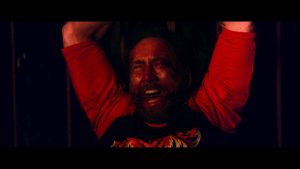 Completely mad, maddening and heartbreaking to watch Cage mirror his career; this time as a lumberjack, perpetually smoking and always wearing a t-shirt with 44 printed on it. Then there are the clichés from the glamorous 80s that have been shamelessly lapped up like whiskey off a woman’s belly; very sub-continental. 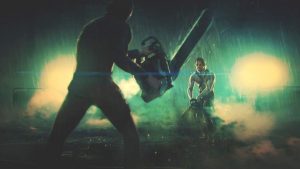 That exchange earns full points, since CHiPs happens to be one of the favourite TV serials of all time for this pilgrim. That and the Lynchian references to Galactus, the consumer of planets. I wonder how Sequential Capitalism works in the case of this Marvel property? 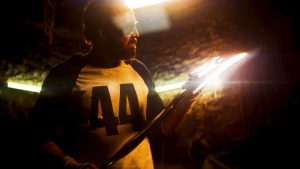 Fuck Marvel, for now. Director Panos Cosmatos has, like most, tried to tread the Kubrick path, and dare I say, he has somewhat succeeded in making the viewer either completely disgruntled or has managed to garner a specialised fan base, which will want more and soon.

Man oh man, this is bath-salts on laudanum with a chainsaw trying to make sense of love and loss and an overdue bankruptcy and downing a bottle of Stoli and screaming the grief out of itself. It doesn’t work, so our Number 44 goes to the ex spec-ops gent who still speaks as if a predator is lurking nearby (and why not, with Shane Black trying to fit a larger than life daddy of all Predators in to a 2.39 : 1 aspect ratio and the money shots; not good), ready to jump the hardened vet for a swift kill, in his RV, where he stores weapons for revenge seekers (the dialogue is such, short, to the three red dots points and explosive). 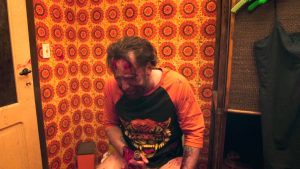 The best scene to come out of pseudo-Hollywood in years, in the humble opinion of yours truly

Mandy is as psychedelic as a peyote trip minus the “Indian, Indian what did you die for?”
The Indian says nothing at all”

Plus Nic Cage does not need fucking Eitri the Dwarf King from Nidavellir to build him an axe or a hammer or a bong pipe for that matter. The man takes everything in to his own hands, including tearing the fabric of the screenplay as blood sprays all over that old familiar Matchstick Men face. 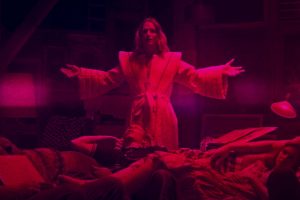