Two desperate filmmakers began a documentary about a cannibalistic-serial killer. What follows is their actual footage. 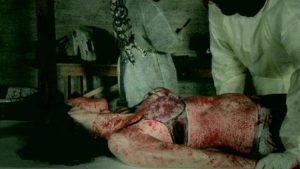 Have you seen the black and white, grainy, grubby frayed old pictures from the the archived police case-files from the Furious Fifties that show a headless body strung upside down, from the roof of a ramshackle barn, with the hands tied to the sides? The legs make a V and we can see an extended gash – running from the lower abdomen right up to the chest – making a bloody cleft with intestines and other organs spilling out in to the tub the body has been placed over. If you have then you know what I’m talking about if not, the body belongs to a woman who was shot and killed by Ed Gein in 1957. 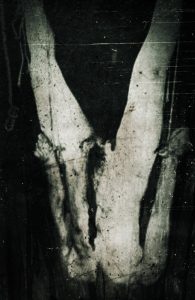 True Crime: Bernice Worden’s body found on the premises of Ed Gein’s farm house at the time of his arrest on November 16, 1957; Plainfield, Wisconsin

Long Pigs is an underground horror excursion by two little known directors/documentarians who have also penned the screenplay. Despite that, throughout the film, the dialogues seem improvised and at times the actors are too dumbfounded to say anything.

We watch a The Blair Witch Project-esque opening credit, without music and the close up of the mouth of a man speaking into a filter-mic; he is a radio show host whose identity is kept hidden. This is followed, again by the TBWP-like text, first warning us of the graphic content and then telling us that a group of filmmakers decided to chronicle the events of the life of serial killer and cannibal Anthony McAlistar (Anthony Alviano), after he agrees to let them document his violent life; hence the film. 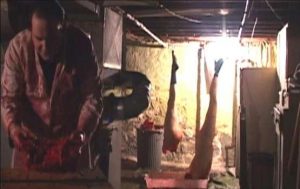 The rest of the film is shot in digital with bland colours and a bleached look, which cannot keep the eerie but strangely even-tempered and composed Anthony come across as the guy next door. He is proud of his butchering skills, he is even more jumped-up about the recipes he uses to prepare the perfect human stew. “If I get caught or something, I’ll write a cookbook; maybe it will become a cult classic”, Anthony says this laughingly.

He is always smiling, there is nothing forthrightly threatening about Anthony, that is until Hammer Time and the numerous times when we are shown scenes of human ribs on the barbie and human thigh-steak (rare) from the femur region. The film shocks not with its murders but what happens to the victims after that. After the gutting and the cooking and garnishing, Anthony is shown eating his victims and that, I think, is the most horrific part of the film as if he is eating sin itself, as if savouring the most delicious food ever, prepared by Mr. Sympathy for The Devil himself. 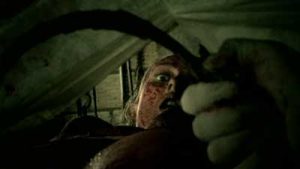 Bitter, agonising and protracted repulsion is felt as he takes a bite and closes his eyes in ecstasy; his already pudgy face is swollen even more by the sheer pleasure and self gratification he feels. He then goes in to a diatribe about the joy of consuming human flesh and talks directly in to the camera, sharing preposterous and outrageous philosophy with the viewers, punctuated with arbitrary musings about the worldly state of affairs.

The complicit documentary crew gets increasingly obsessive about their subject, eventually becoming accomplices to the murders. But we have seen it happen before. The only difference here is the documentary crew becoming weary of Anthony’s discordant and inconsistent stories of his past and high-flown and pretentious reasoning and a grandiose sense of self, while in other similar films the filmmakers start to idealise the killer. They even manage to interview one of the victims’ fathers and Anthony is shown operating the boom with a perplexed expression on his face as the father begins to cry. The madman is actually touched. What the fuck? 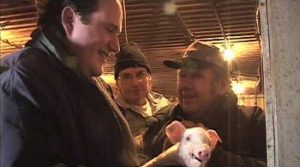 I’ll buy that for a dollar!

As the film nears its end, Anthony starts getting uncomfortable and nervous, having given an all-access pass to the filmmakers. He becomes disagreeable, he begins doubting and his pleasant disposition slowly fades away – giving way to a predictable final act.

Long Pigs also tries a hand at social commentary but to little or no effect. The two things working for this film is the performance by Anthony Alviano as the killer and the special effects that look horrifically real and truly appalling, specially when you know that the portly lady of the night will end up on a dinner plate with red wine and pieces of her being wrapped in paper and being marked with a black marky and put in to a fridge for later consumption. 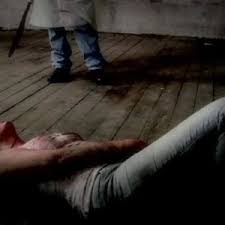 This was a difficult film to watch and I would not recommend it to anyone; just the gore hounds and devotees of the macabre. Even then Long Pigs is an average film with super impressive body horror special effects that can seriously, afterwards, for days remind you of unpleasant visuals at the sight of food. Cooked or not.

“First you pull out the anus and tie it to stop any infection from spreading to the meat.” And they show all of it to us.