Rachel, a rookie cop, is about to begin her first night shift in a neglected police station in a Scottish, backwater town. The kind of place where the tide has gone out and stranded a motley bunch of the aimless, the forgotten, the bitter-and-twisted who all think that, really, they deserve to be somewhere else. They all think they're there by accident and that, with a little luck, life is going to get better. Wrong, on both counts. Six is about to arrive - and All Hell Will Break Loose!
20141 h 28 min
Click an icon to see more 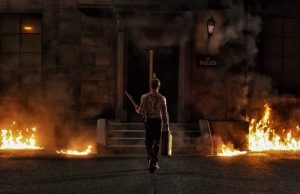 Liam Cunningham (Safe House, 2012 ) watches the The Green Mile, 1999 and quickly scans through The Stand by Stephen King before he appears during a magnificent sequence where towering waves are shot in the most exquisite manner. The waves crash on the rocks and turn to foam. It all looks like a god has descended from the heavens and is putting in everything to brew up a Storm of the Century with such wrath, that took down Pompeii. Or perhaps not, Paul W. S. Anderson did. The god is exhausted and is reduced to foaming at the mouth as the waves keep colliding with the small mountains on the beach and Number 6 (sigh) shows us a few tricks with matchsticks and crow feathers, while his face is covered in a hoodie. An ancient long coat with an ancient head-cover made of tweed and cloth. 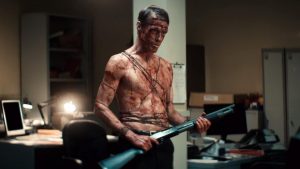 What the Fat Bastard did was let Melanie Daniels (Tippi Hedren) sit on the bench outside the school and closed in on her as a billion crows started massing behind her, perching themselves on one of the school gates, unbeknown to her. The viewers were left in a state of utter helplessness and a sense of doom was perfectly set in the minds of the keen viewer, who were already obsessed with the Master of Suspense and his crafty film-making.
My dislike for Hitchcock never seems to fully bloom; for you see, bits like the one above keep me convinced that he was something, if not the MASTER. 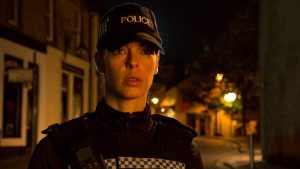 It is the first day for Police Constable Rachel Heggie (Pollyanna McIntosh) at the new (evil) precinct in the nether-regions of Ireland or Belgium or Hell. In most frames she looks so much like Alice of Resident Ripley fame, although with a more wholesome frame; yet in others she looks like a mix between one of my childhood crushes (now a mum of two – not mine) and Rebecca Hall and of course, Alice; my sweet Alice. Police Constable Heggie is so hot that she charms ‘Satan/Angel of Death/John Coffey‘ in to following her to the cursed precinct. That’s a first, unless you thought the X-Files was nuts with it’s whistling, a conflicted detective and her superstitious, almost bored partner.

The man in Cell 6

The cast ensemble is such that we feel for them; even the most depraved criminal is given a chance to redeem on-screen (in so many ways) by director Brian O’Malley and the writers. It works; for as soon as the characters are done with the ‘I am beyond morality‘ and ‘It must be done to maintain the balance‘ reasoning, they are ready to face the penalty. Everyone must pay for their sins and in this case, pay extra.

A scene where Sgt. MacReady (Douglas Russell), who looks like Willem (Jesus) Daffoe  interrogates Number 6 (sigh) and completes a bible verse that Number 6 (sigh) has started to pray, establishes the tone and the intentions of the film. Predictable, yes, but also innovative and fun.

“You look more like an Old Testament sort of a person.”

Plus who can resist blatant nods to Event Horizon and Passion of The Christ. The film is brimming with Biblical symbolism, complete to a log-book that Number 6 (sigh) keeps on his person with names in them. We all know what the names are for. I call it the Cinderella Syndrome, since the term ‘The Midnight Hour‘ is stressed upon many times, throughout the film.

Look like the trigger jammed, but no more, see?

A fine addition to the All must go to Hell genre, albeit filled with inspirations. However, much to the film-maker’s credit, the influences are shot in some of the most terrifying and classic ways.

The final moments are a treat to watch, specially with the costumes and body make-up and a completely out of his mind, Sgt. MacReady looking like a true motherfucker bat out of motherfucking hell with a shot gun and delusions of grandeur, which make him think he’s Archangel Azrael. Little does he know that the real deal is occupying one of the cells in the Station basement. 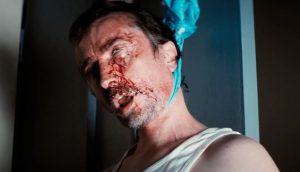 Aesthetically sound – except for a shot of a raven from The Crow, superimposed upon moving clouds – well directed and told, knowing very well that certain genre cliches are being over-used and must be given a completely different treatment. It works here.

The story keeps getting even more WTF with each new act. It has all the potential for an overkill but somehow, perhaps, the fast pace and character placing and the overall feel of the film with passable to good performances, do not let it get ripe. As a matter of fact this horror outing surprises with its close-up shots and human deviant behaviour being taken to task, in a way that Jason Startham would be proud and so would Paul W. Anderson and Jeffery Dahmer (late, extremely late) and Venom, Tom Holland‘s nemesis (or Bane‘s bane); with a man wrapped in barbed-wires and wearing a Crown of Thorns as he rummages his fridge for milk and a castrated something among other parts of severed human anatomy. 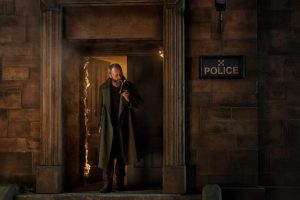 I liked it very much and Pollyanna McIntosh is my new cover photo girl for Facebook.

One more thing. The Stephen King novel is being remade into a four part epic, with Matthew McConaughey as The Man himself, Randall Flagg. I wonder who will play the recurring character from the King Universe, Sheriff Alan Pangborn.