Love has never been so cruel

A group of college boys, bored with the every day "gay life" of LA, decide to skip Pride weekend in exchange for a camping trip in the woods. Quickly overcome with boredom in their new surroundings, the boys venture into a game that ultimately unleashes the vengeful spirit of a local legend known as Malice Valeria. Overcome by her deadly plan of tainted love and her thirst to take back what was lost long ago, the boys must now band together before they fall victim to the poisons of a broken heart.
2014
Click an icon to see more

Four Gays, One Straight, and a Cabin in the Woods

Everyone is guilty of watching a film they normally wouldn’t watch every so often, whether it’s because of a friends recommendation or just sheer curiosity. I for one am guilty of participating in this activity more often than I would ever expect, but I noticed that the peak of this activity happens whenever I’m sick. The last time I called in sick at work, I ended up watching Fifty Shades of Grey, simply because it was airing on one of the movie channels on TV, and it proved to be a lot less laborious than I had initially anticipted. That’s not to say that I thought it was a great film, by any means, but I will readily admit that I’ve grown to enjoy the act of indulging in a fatuous piece of cinema whenever I’m stuck at home with nothing else to cheer me up. It came as a massive coincidence, then, that I ended up getting sick the week that I had planned to watch Kissing Darkness, a low budget gay horror flick, in order to fulfill my goal of writing a review for it on this site. I mentioned in a previous review (Rift 2018) that I had yet to really delve into gay horror territory, mostly because of the endless amount of David DeCoteau style films that seem to dominate the sub-genre. You know what I’m talking about; those low budget flicks that always feature a group of attractive young males who can’t seem to keep their shirts on. While there is absolutely nothing wrong with those kinds of films, and I of course fully understand the appeal, I never really gained a predilection towards them. However, my timing could not have been more perfect, so I grabbed my Vicks and jug of orange juice, and entered a world with four gays, one straight, and a cabin in the woods. 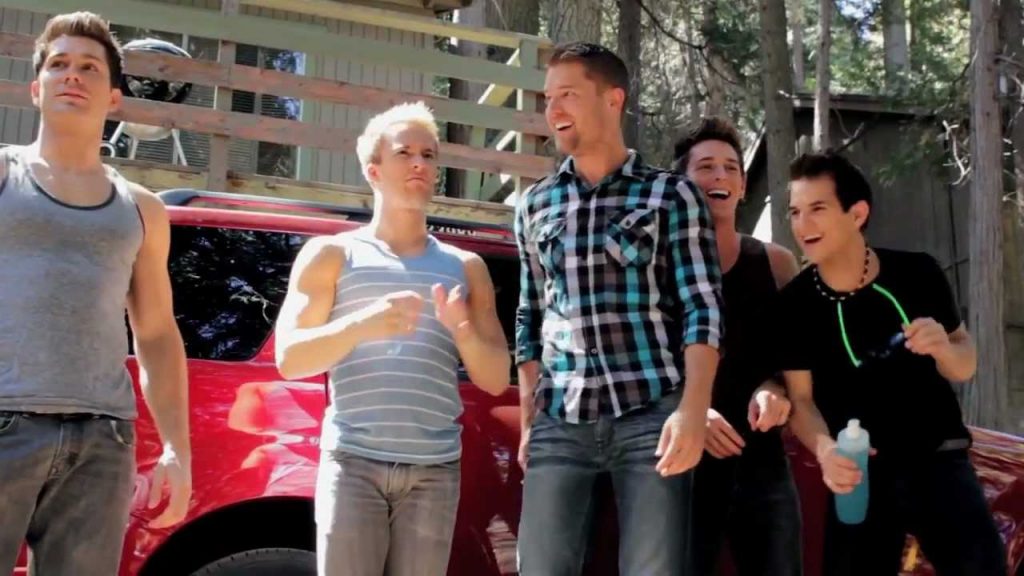 The film begins just as our lead characters arrive at the above mentioned cabin, which belongs to our token straight lead named Vlad (like the impaler). They’ve decided to vacate at this location in hopes of experiencing something different from their typical day-to-day lives; it becomes fairly apparent that they have grown quite tired of the gay scene in the city, a feeling that a lot of us have probably felt at least once in our lives, and were eager to do something ‘normal’ for a change. This does not bode well at first because they quickly find themselves bored out of their minds and deprived of their cell phones due to bad reception. Just as they’ve all begun to lose hope, Vlad brings out a ouija board that was stored away in a closet. Apparently his father used it to try and scare him and his family years ago, and it is now Vlad’s turn to try and scare his friends as well. He tells them a story about a malign woman who used to live nearby and had a deep obsession with Satan. This woman found her fiance having intimate relations with someone else just days before the wedding, and in a fit of fervent rage, killed them both by producing deep lacerations on their flesh, and sold her soul to Satan hoping to find herself a new lover that would satiate her lust. We’ve all been there, right? So of course no one believes his story, but it all becomes much too real when one of the guys finds her pendant in the woods and inadvertently places it on the ouija board. Once she is established as the film’s antagonist, we are treated to a number of bloody and erotic sequences ranging from vampiric neck-sucking orgies to one-on-one demon possessed indiscretions. 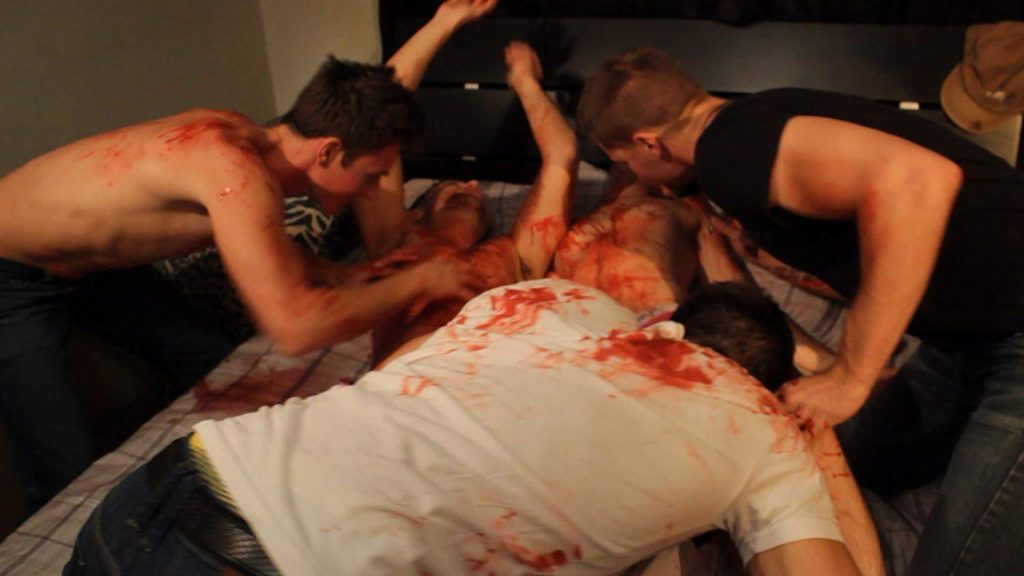 Thankfully, the film rarely takes itself seriously. There is a fair amount of humor sprinkled throughout; one standout moment showcased our leads as they investigated a noise coming from another room and one of them was armed with a large dildo as a defense item. It’s all very self-aware, which made it all the more amusing. It’s never even remotely creepy, but that’s to be expected from this type of film. It isn’t particularly special effects heavy, but when it does play up the effects in the second and third act, it’s neither impressive nor disappointing. And to be completely honest, these types of films are targeted to a very specific demographic, one that won’t go into it expecting anything more than some gorgeous eye candy and some fun cheap horror themed set pieces. When it comes down to it, Kissing Darkness succeeds in providing all of this in excess. For example, it only takes Vlad about two minutes into the film before he decides to take his shirt off, and another minute or so before he explores the empty cabin alone and insists that someone is already in there. The film wastes no time with any that. And I found it interesting that Vlad, the only straight character in the group, would even be considered a friend to the others after displaying such crude behavior towards them. They’re quick to call his attitude out as repressed homosexuality, but we never delve into it any further. It may or may not be true, seeing as how his character is exactly the same once all of the madness is over. 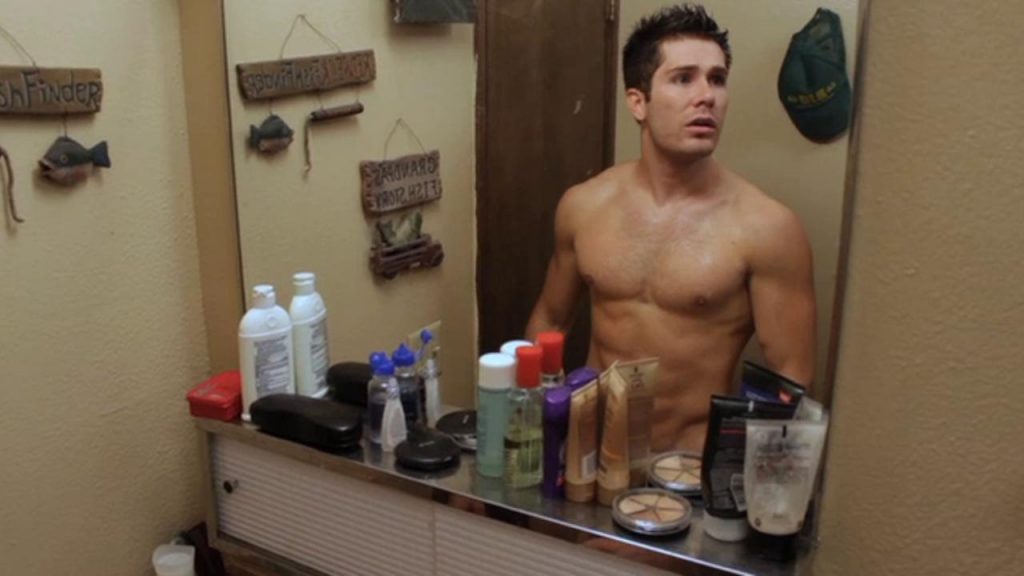 As I admitted above, this film is not one that I would normally anticipate watching. At the very least, I can appreciate the boisterous vibes it emits, and I would be lying if I said that I did not find it mildly amusing. I firmly believe that this type of film is best enjoyed in the company of friends. I often find that being with like-minded people makes for a better B-grade/low-budget horror movie viewing experience overall, especially when said film is from the ‘so-bad-it’s-good’ variety. If you’re like me, you can also watch it if you happen to get sick and are forced to stay home from work! Kissing Darkness is available to stream via Amazon Prime and the iTunes store. Those of you who are familiar with this specific sub-genre will know exactly what to expect! 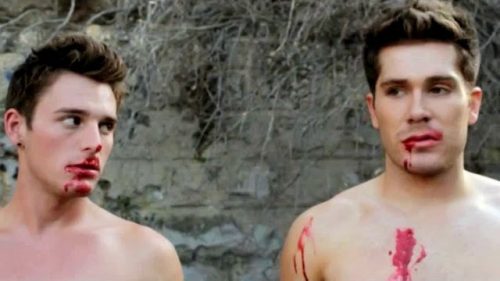