Your fears are unleashed

In a small town in Maine, seven children known as The Losers Club come face to face with life problems, bullies and a monster that takes the shape of a clown called Pennywise.
20172 h 14 min
Click an icon to see more 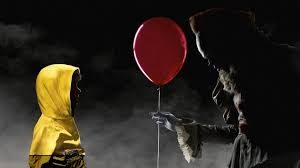 It does for Stephen King adaptations what the Evil Dead remake did for Raimi‘s franchise. Although a period piece, director Andy Muschietti (Mama, 2008) and writers Chase Palmer and Cary Fukunaga give the film a contemporary mind-set, elevating the film to a place where it can shake hands with the source material and not falter.

The film is highly terrifying and unforgiving, it is also somewhat cheap, keeping in mind the Chapter 1 ending; I did wonder, while watching the trailers, where had all the grown up people gone? Nevertheless, despite script reconstruction, directors being changed thrice and multiple recasting, Pennywise has not been more effective in leaving the viewer frantic & shaking like a leaf every time Bill Skarsgård‘s evil incarnate clown is on screen, donning an immaculately designed, of Medieval, Renaissance, Elizabethan, and Victorian variety sewed into one costume, since the novel’s publication back in the September of good ol’ 1986. It shows up every twenty seven years since the beginning of time or at least since the beginning of the Black Death, abducting children by the thousands; therefore the costume design and its influences make perfect sense. And this guy is no Pied Piper of Hamelin, this monstrosity is Pennywise of Derry in all his gaping mouth of glory. 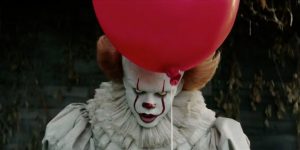 Relentlessly filmed in the town of Port Hope, which the film crew turned into Derry, and Skarsgård in to Pennywise to which a method was applied by the actor who resembles a young Steve Buscemi. “Keep the children away from me when not shooting“; were Skarsgård‘s instructions to the crew and they complied. And I was reminded of Salo, fleetingly; not at all a positive association for a summer film. The cruelty, the first murder that goes on forever like the scene with the infant in Antichrist, 2009. The exchange between Georgie Denbrough and the evil clown has the potential to keep this viewer up at nights. Specially the way Skarsgård changes expressions with intent. Goodness.

The Stand by Me element has been given its due share, serving it like a ritual; seven young people coming of age, the breathtaking aerial shot of the bunch swimming in the local river (Kenduskeag Stream in Bangor Maine also known as The Barrens in the novel). The fact that every time Pennywise is sneaking behind a corner with a hand visible gives the keen viewer, the horror fan the creeps and total worth for entry, is enough provision for an effectively functional scary picture. 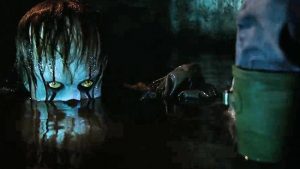 Sometimes the acting becomes a little over the top but then a sighting of the child-eater neutralizes the viewer’s thoughts; not every time though. Whenever the character of Eddie Kaspbrak speaks it seems he’s trying too hard to fit in as a boy with asthma; a hypochondriac child with a dominating mother. Hurdles that he must overcome if the monster is to be defeated. Much like Bill (Billy) Denbrough‘s stammer, Beverly Marsh‘s dad and so on. 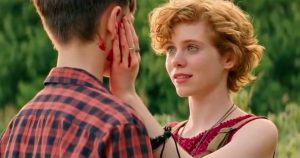 The scary scenes are as it is frightening and when the ominous score starts to walk hand-in-hand with the visuals is when things get really disconcerting, complete to a haunted house, which must be entered if the nightmare has to end. The imagery leaves one looking behind the shoulder; wiping the sweat off his/her palms against the jeans.Having said that a little more dread and gradation would have done so much to bring the child-characters to fruition. Plus the more we see of Pennywise the less scary he gets, unless he’s dressed like Georgie and Billy’s mum and staring right at the camera, through it with its yellow, glowing eyes; his smile growing wider with the passing of each frame. Showing to us a glimpse of a world that Stephen King calls the Macroverse, which is a creation of Maturin the Turtle, who threw up the universe into being. We are also shown a sea of destructive orange lights that drive most humans insane upon sight. In the books, Bill nearly glimpses the deadlights and survives, but the only person to fully see the deadlights and recover is his wife Audra. In the film, it’s Beverly who glimpses the deadlights when Pennywise unhinges his jaw and reveals a peek at his true form. We also see subtle hints of the deadlights when Pennywise’s eye glow orange throughout the film, first when he terrorizes Mike and again when he retreats to the Well House after the Niebolt street battle. 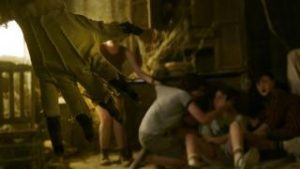 The frenzy with which Pennywise approaches it’s victims is impressively terrific along-with the transformations in the final scenes of conflict. This version of the film is definitely higher than the conventions of a big budget horror film made in these times. Plus I hear it has the blessings of Mr. King himself, so what the hell; watch it and do not miss the diminutive homage to films like Batman, 1989; Lethal Weapon, 1987 and A Nightmare on Elm Street 5: The Dream Child, 1989. 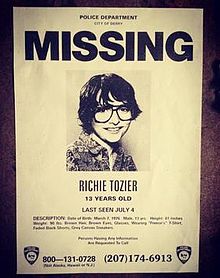 A sequel is planned for this year.

The launch of SS George, sailing straight to hell