For 19-year-old Jay, fall should be about school, boys and weekends out at the lake. But a seemingly innocent physical encounter turns sour and gives her the inescapable sense that someone, or something, is following her. Faced with this burden, Jay and her teenage friends must find a way to escape the horror that seems to be only a few steps behind.
20141 h 40 min
Click an icon to see more

After watching this baby, I had an undeniably strong (adamantium strong) urge to have a reckless orgy, not out of desire or lust or to partake of the depraved excess; the slithering on checkered floors and moving with sweaty people with matted hair, moaning all over the place and changing partners like we change batteries on the new generation Gillette razors. That would be too long. Think of something shorter, like changing diapers.
As mentioned earlier the need felt was not out of the instinct to fuck, but to live, to continue to exist. Procreation can go to hell for now.

But then she jumped into the sea with a luxury yacht on the horizon. Ugh… Women. So that takes care of my impulses. 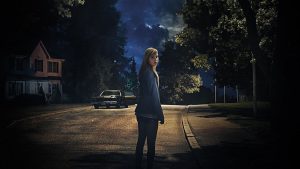 Plus the deliberately (slightly) off-scale horns and strings add so much atmosphere to the film that after a while the bar becomes filled with cigarette smoke. Oh, I forget; ‘no smoking Indoors under any any, motherfucker, ANY circumstances‘. What’s next… No shitting indoors? Assholes. So, imagine the days when ciggy wiggy dilly’s were allowed everywhere, and the bar gets all smoky and dense and about to smother you with the weight; all you want is to leave in a car with imaginary sceptics.

Writer, director David Robert Mitchell applies a new method to tell his story with the use of digital footage and film and highly innovative shots of the scream queen running in the woods… errr on the road, the highway, the treadmill. It all works; the filmmakers manage not only to scare but also leave an impression on the new STD Horror genre, made popular again, not by a film but by a graphic novel by Charles Burns, who wrote and drew the book, Black Hole in a span of ten years.
I hear they are thinking of making a film based on Black Hole. I’d love to see them try.

Jay (Maika Monroe) has sex with a new boyfriend. The BF dumps her in the most unconventional manner ever. Why didn’t I think of it? The teenager gets pregnant with horror and promiscuity; but that’s alright. It’s 2018 and Cruising was made back in 1980.

The film, to me, is more closely an analogy for bug-chasers. Gay men actively seeking HIV positive men to infect them and make them part of the brotherhood. The receiver argues that he doesn’t have to be careful anymore. Makes sense; in 2021. Yup.

Truly frightening and with a beautiful lead who can also act, It Follows is definitely an outstanding achievement in a genre, where there is no Middle Earth. When there is a Middle Earth there’s also an Ouija board and teenagers going nuts over pentagrams and symbols of Ogul and Baphomet and the Royal Seal and what have you. 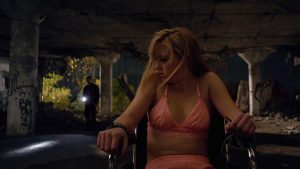 Highly original, scary as hell, gripping, intense, insane, I mean business, that music (Lord) and above all, highly entertaining and also getting entertained by our own reaction to watching big momma coming at you, top less, with one eye and a nipple missing.

One question: Why are they holding hands in the end. Isn’t that in complete contrast to the casual fucking makes you a mutant narrative. Just that, the fucking part. No one loves anyone in the film. They just fuck to survive, not to get intimate or to get married or to have babies nor alien babies; none of that crap happens here. Teenagers fuck and get into trouble, like how it happens in grade school.

Are you mad? I’m still recoiling from the watch.
Brilliant.