As sadomasochistic yakuza enforcer Kakihara searches for his missing boss he comes across Ichi, a repressed and psychotic killer who may be able to inflict levels of pain that Kakihara has only dreamed of.
20012 h 09 min
Click an icon to see more 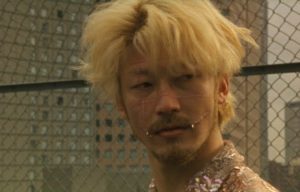 “Look”, my friend raised his voice a little, pointing towards the screen.
‘What? Is that THE Takashi Miike?”
“No, it’s Takaashee Meekay, not Takayshi Mike.”
“Fuck that, he looks like a mafia boss, a Yakuza boss. Heck he looks like he could kill domestic help if they put extra sugar in his coffee. Damn he just slipped into a black limo and went back to Japan.”
“Yeah man.” He chuckled.
“Damn that was awesome.”
‘”Hostel isn’t bad either.”
“Are you kidding me man, this is the most fun I’ve had since I gouged my sister-in-laws eyes and sent it through DHL Yellow Box to her fiance in Switzerland.”
“Yeah? Let’s just stick to the picture.” He looked at me scornfully for telling what was to become a first in a series of unfunny anecdotes 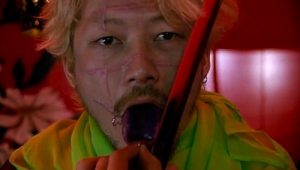 The cameo was enough for Eli Roth to show us he was rubbing shoulders with the Mestro of ultra-violence. In 1999, Miike had a unassuming woman keep a man or woman (reduced to animal form) in her house in a industrial sized bag for Lord knows how long or what reason, after cutting off his limbs and tongue. All this while she whispered sweet nothings into the phone with her fiance of good intentions. And then most know how the film Audition ends; with viewers freaking out, checking in to hospitals every time they think they have a dust particle in the eye, or maybe not. 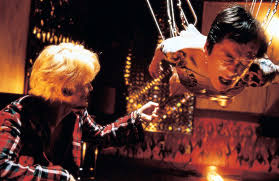 Miike has made ninety eight films since 1991, churning out seven films per year on average. The best part: out of the 98 films only a few disappoint and even then the fan is pleased to have moved a little closer to finish watching all films, TV shows, mini-series directed by the Doctor Moreau by H. G. Wells (not from the John Frankenheimer and Richard Stanley 1996 film) of Asian Extreme Cinema. 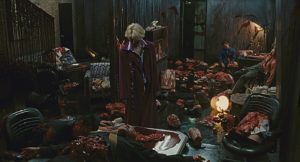 Ichi was released at a time when the world stopped for one whole day. Followed by anger, death in politics, the wars that ensued and the overall state of global affairs that were to change completely in another ten, fifteen years. However, the film did not go unnoticed in home-country, Japan. A country that gave us Manga, Sony, test subjects for the Manhattan Project and the Silverplate exercises, grown women in school uniforms from the Anime Universe. Women who are more violent than they are sexy. And they are sinfully desirable. I forgot I was talking of fictional characters drawn by the uber-talented artists that Japan has produced, that spin tales inspired straight from that dark place, south-east of the human heart. 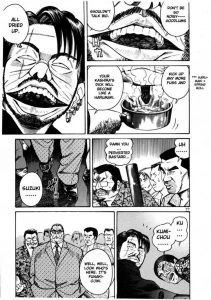 A copy of a page from the Manga series

Ichi made keen viewers and others turn their heads, either from the screen or to take notice of this new force that was gaining a reputation for dishing out violence in the most riotous, absurd, off-the-wall, off the gurney, maimed, philosophically challenging, ideals altering, a change of heart, intentions manner. However, Miike coupled his violence with the most bizarre, manic, zany and (at most times) veritable and absolute characters who balance the highly outlandish and deviant action scenes with their own little (brilliant) quirks that grow into something very ugly by the end of Miike’s films. 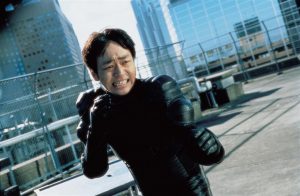 This is a trademark Miike film. The Mole Song: Undercover Agent Reiji, 2013, a recent offing by Miike comes close to the energy of Ichi. His other, more structured films like 13 Assasins, 2010 and Lessons of the Evil (Prologue), 2012 show us the slight detour Miike is taking from his previous never say CUT filming techniques. And yet, even Assasins and Evil have Miike’s alien DNA all over it. 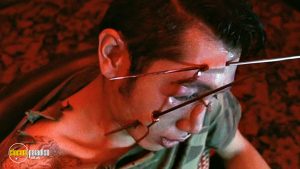 When a Yakuza boss goes missing, his top henchman Kakihara, played by the brilliant poker-joker faced, chain smoking and intimidating from the first frame, Tadanobu Asano (Thor: The Dark World , 2013) a sadomasochist who takes his sexual desires very seriously, even during the fiercest of battles, takes on himself to find the killer(s) using his own methods (read Miike’s madness). The performances are like a roundhouse kick to the jugular. 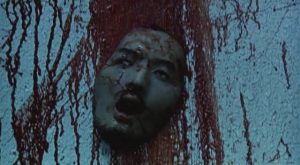 Filled with scenes of extreme violence – that look dated (except the cringe-inducing and a truly distressing Frying Tempura scene with a Yakuza boss, Suzuki, suspended by hooks. And that’s just the prologue to the scene) – and dark humour in equal quantity, coupled with Jijii the Handler; a character that can only come out of a manga novel and Nao Ômori (R100, 2013) as Ichi, who puts on a exhausting performance, intentionally bland and acquiescent yet exploding with repressed (by hypnosis) sexual urges, which result in the most depraved scenes shown on-screen. However, that does not matter as long as the viewer is ducking, wincing, taking a long drag on those Marlboros, wincing again, cussing at the screen, rooting for Ichi only to have our minds changed a beat later. 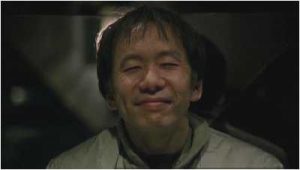 I present to you Jijii the Handler

Filled with bright lights, exquisite furniture, plants covered in jizz, dopey action, disco-bar cinematography by Hideo Yamamoto (Fireworks, 1997) and written by Sakichi Sato, and based on Hideo Yamamoto‘s manga, Ichi the Killer is Miike’s bloody mark on the world of films where gore is King, shock is therapy and where stomachs get weak while the hound-dogs get their fix, but not before the viewer has managed to balance on a staircase railing, laughing with pangs of excitement impacting the brain at a 100 mph yet full of fear that turns to unadulterated pleasure as the viewer falls and falls deeper into the abyss that is the ridiculously gifted Takashi Miike. Gifts that include copious amounts of meth and coke and harry and all the possibilities in the world to go fucking crazy after speed balling the senses out of everyone within a 100 meter radius.