From Dusk Till Dawn

One night is all that stands between them and freedom. But it's going to be a hell of a night.

Seth Gecko and his younger brother Richard are on the run after a bloody bank robbery in Texas. They escape across the border into Mexico and will be home-free the next morning, when they pay off the local kingpin. They just have to survive 'from dusk till dawn' at the rendezvous point, which turns out to be a Hell of a strip joint.
19961 h 48 min
Click an icon to see more 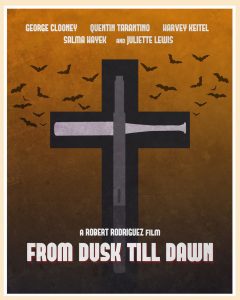 Goodness, all of them are so young… and thin. 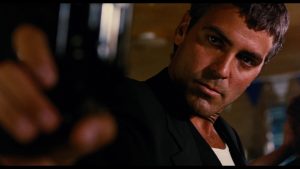 Robert Rodriguez‘s From Dusk Till Dawn is as B grade as a B grade production house can pretend to back. The screenplay by Mr. ‘Black Dingus’ is not as witty as his other outings but that could be testing loyalties or time. Having said that, Dawn is pretty damn entertaining even after twenty two years, during which the vampire genre has been made to drill off-shore. Plus, it has a thirty five year old George Clooney (now 57 and twice as charming), in his first Hollywood film role, straight outta the world of television (and five forgotten films) and head-first in to ‘Titty Twister Hell‘. 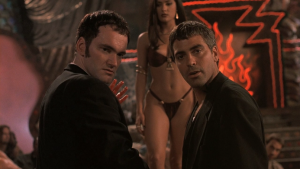 He plays Seth Gecko who, with the help of his brother, has robbed a bank and killed more than a dozen people, cops included and is now running away to Mexico. However not before wrecking havoc at a convenience store. An encounter which is brimming with tension and the now famous Tarantino chit chat and a cameo by bad ass Texas Ranger Earl McGraw (Michael Parks). Speaking of cameos we also see John Saxon as FBI Agent Stanley Chase, drawing a tough as nails portrait of the agent in the very short time given to him. 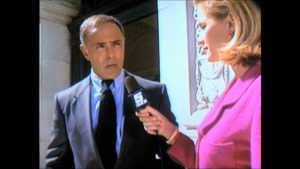 The pure chaotic and fierce nature of the ‘store sequence’ sets the pace for Dawn as the brother, played by Mr. Black Dingus gives in to his psychopathic demons and makes the whole shit house go up in flames. The have a seat opening and the convenience store sequence are trademark Rodriguez, consorting humour with ultra-violence and making it work all the way to catapulting Clooney’s career as he tilts his .44 whenever he threatens a potential victim and holds back that million dollar smile (which escapes every once in a while, and the whole screen is lit up by flood lights) and never lets the brood and the menace set in completely. He is the good thief among the two brothers. Tarantino plays Richard Gecko, a rapist with the circuitry all messed up in his head. He overacts and that is what Dawn needs, along with other matters of dramaturgy overkill. 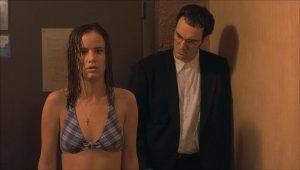 I had forgotten that Harvey Keitel was in this splatter flick, a man of faith, a man in doubt. He is bad ass even with the innocent looking cowboy hat worn just above the hairline, the horn-rimmed glasses, the ambivalent disposition, two children (one of them is a very young and a post Natural Born Killers, 1994 Juliet Lewis) and an RV. Whenever the camera is on his face the movie seems to transcend its own constitution (the look in Keitel’s eyes is sobering and judicious and in complete contrast with the tone of the extremely bloody film) and then Clooney says something mean, which is way too mean but it’s Clooney. Using the techniques he applied to El mariachi, 1992, Rodriguez races towards a frenzied end leaving a dust storm in his wake. 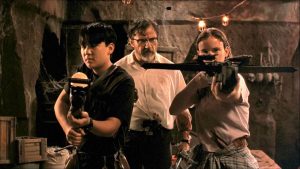 Then comes the Apocalypse Now inspired strip-joint where Cheech Marin barks out the immortal (sort of) monologue in to the blow horn. “The Bueetifool Poosee, Snapper Poosee, Yellow, Wet, Bloody…” and what have you ‘Pussy‘ diatribe is one of the most indelible in film history, at least for me. It is as funny as it was two decades ago. Danny Trejo as Razor Charlie looks like a kid with bad ass tattoos, Tom Savini as Sex Machine is, well, Tom Savini as anybody with those wide-eyes and the Sanchez. Fred Williamson‘s Frost is a motherfucker when it comes to punching the shit out of them nasty vampires. Damn right! 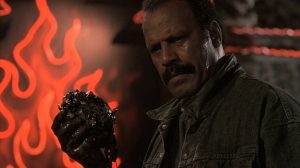 Salma Hayek is the feature presentation of the eventful evening at the ‘Titty Twister’ and she is named after a Mexican film from 1975, Satanico Pandemonium: La Sexorcista. She hit the Nineties R-rated sex-scene (ha!) like a fucking meteor, snake-dancing her way into movie history. The snake is huge and so is the appetite, both sides of the table. 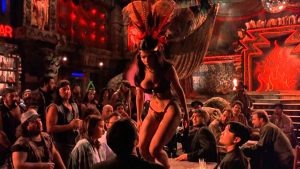 Then the cheesy-green transformations happen, cheesy-green to save the film from being branded with an NC-17 rating and the viewers get treated to heads being blown up, men getting chunks of flesh getting bitten out of them; the John Carpenter style camera angles that make the film look both, funny in a retroflex way and excessively bloodthirsty. 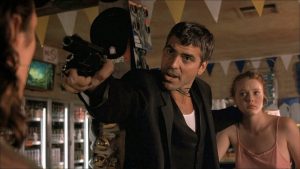 The picture does not want to take the consequences of its carnage very seriously, payback is instantaneous and so is the kick-back. The ending, although stupefying is modest and straightforward and fits in pretty well with the overall flavour of this A Band Apart production, much like Dimension Film‘s Once Upon a Time in Mexico, 2003 and the blind Sands (Depp) firing away his weapon in all directions before he gets one in the head. 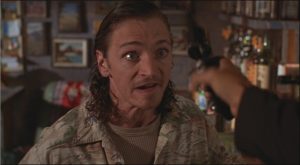 With tons of camp, a shitload of gore, appearances by both, the director’s and the writer’s exploitation idols, the precipitous story-telling, Keitel and Clooney and their incredible chemistry and no holds barred action make this picture one of its kind and administers some high points of true junk conscious into mainstream Hollywood and sometimes seems to laugh in our faces with a deliriously entertaining, pretending to be hip, pulp crime/vampire hybrid film. The best part? We do not mind one bit. 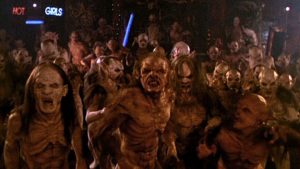 The last shot of the Aztec temple with the camera pulling back from the mountain of junk that surrounds it is strangely impressive and makes the feverishly hysterical and mindless nihilistic film come full circle, although in the face of much negative reception back in the day. 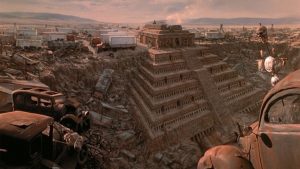 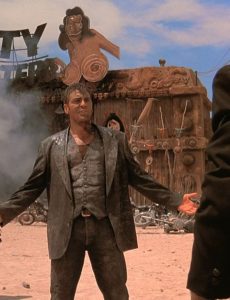 There. No more ‘Titty Twister’