Due to a near-fatal accident that has left her incapacitated and depleted of her long-term memory, a temporarily wheelchair-bound woman returns home after being abroad for six years accompanied by her bohemian boyfriend, the apparent cause of the accident. Unable to remember her family or her own childhood, she sets out, with the help of her boyfriend, to find the reason for her leaving all those years ago and quickly discovers her relatives may not be as loving as she’d thought
20151 h 41 min
Click an icon to see more 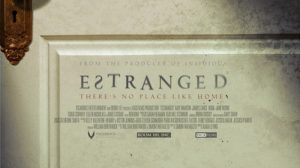 A woman loses her memory among other faculties after a road accident. Six months later she is taken back to her house by her boyfriend. She is surprised that she has a mansion of a house and that she has a freaking butler. The family acts funny. The brother is a riot, his hair is even more boisterous and his character, plain old Machiavellian. The father is a big, burly man in his Sixties who smokes a pipe and plays solitaire (with a real deck of cards) on the living room table and goes hunting every Wednesday. The sister is full crescendo awkward. I mean whenever she comes on screen the horns go off either in alarm or in ridicule. 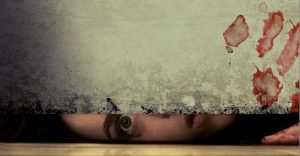 Our captive is the pretty January (Amy Manson) who gives a smouldering performance specially after… After what?

What does the family do to call upon themselves such wrath. I have no idea. Yup they are a little strict and pretty upset with January for leaving the house in the first place and do get all Rosemary’s Baby with her later in the film (as punishment), but all they want her to do is to lend a hand with domestic chores, after she has recovered. The boyfriend is an employee at the movie plot drive-thru and mommy is living the Miss Violence life. She is fucking chilled out, she is in Siberia, she is in SSRI heaven, she is living in a house made of bromazepam pills. She IS a demilitarized zone; the motherfucker. 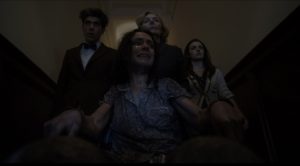 Dysfunction could have taken on a new meaning but it doesn’t in this whose family is it anyway? horror/thriller. It does not do that because as soon as the framed shots start to resemble certain Greek films, Estranged loses its own vicissitude. 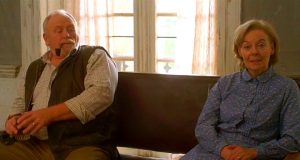 Of late, senior citizens are becoming the choice for ‘the demon’ in horror outings for God knows what reason

The butler (Craig Conway; the menacing evil boss from Doomsday, 2008) is the only good thing going for the film and January.

January doesn’t remember she lives in a mansion?
She has long term memory loss
Yeah, but still, she forgot she was rich and spoilt rotten and a whore? I’m just adding up here.