The cat is the most feared animal there is!

Three teenagers are confined to an isolated country estate that could very well be on another planet. The trio spend their days listening to endless homemade tapes that teach them a whole new vocabulary. Any word that comes from beyond their family abode is instantly assigned a new meaning. Hence 'the sea' refers to a large armchair and 'zombies' are little yellow flowers. Having invented a brother whom they claim to have ostracized for his disobedience, the uber-controlling parents terrorize their offspring into submission.
20091 h 34 min
Click an icon to see more 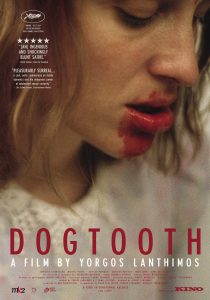 Dogtooth is a bizarre amplification of conditioning humans from birth. A Greek film, which deals with the subjects of confinement, recluse, incest among other rather fragmentary states of mind.

A complex Greek offing, like this lovely film, directed with poetry by Yorgos Lanthimos, simply must; for the sake of it’s Golden Age (60’s), travel far and wide and acquire inspiration from the likes of Michalis Kakogiannis (1962 -2011) and find its roots in texts of the Greek tragedian Euripides.

On the other hand the film also has a bent towards the neorealism of Modern Greek Cinema. This film’s narrative blends in the classic social context and use of uncommon or fresh actors; in order to remove any pretence that a known actor may carry. Perhaps also to walk that extra mile, naked without charging double.

Dogtooth is an extremely incongruous film and a directorial achievement. Hilarious at times yet quite unsettling at others. The contemporary pace of the film is interjected with visuals that come at you with the force of a heavyweight’s power jabs.

The language, did I mention, is Greek?

Although calm on the surface, the underlying discomfort from the get-go gets to you after a while. The movie pulls you in within it’s three dimensional characters and you become a Dogtooth.

Things start to look different, nothing seems right. The blatant Freudian punctuation , the mystery shrouded in psychosis, the back- story; everything happens slowly for your mind to grasp the details, editing, the intentional recording of out of frame heads. All of it takes you deep inside a hole and leave you there, expecting to find your way out on your own.

A dark, unexpectedly convoluted and a Gordian film whose violent scenes are either executed very well or the actors did get a real whack or two or three. In the end it sticks to you like caked blood, specially when a VHS has been used in the most preposterous way ever 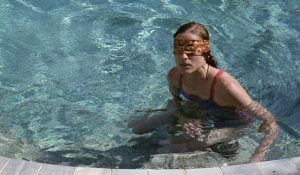 I am still pondering the end, without rational answers. However sometimes reason goes out the window and Dogtooth settles in with ease or unease; not the viewer’s call, no ma’am.