Al Pacino is Cruising for a killer.

A serial killer brutally slays and dismembers several gay men in New York's S/M and leather districts. The young police officer Steve Burns is sent undercover onto the streets as decoy for the murderer. Working almost completely isolated from his department, he has to learn and practice the complex rules and signals of this little society.
19801 h 42 min
Click an icon to see more

Before Gasper Noe showed to us the French underbelly of the gay S&M subculture in Irreversible, 2002 and shocked us with neon and strobe lighting, lots of shadows, goth cinematography and scenes of real penetration, decadence and men dressed in leather or bound and gagged, there was William Friedkin (The French Connection, 1971). Plus, I cannot stress enough how significant a contribution Cruising is; culturally and also in these hard to handle (the sexuality) times. It must be seen in its entirety and since the forty minutes of the final cut went missing, James Franco made a short called Interior. Leather Bar. in 2013; including the scenes that had the MPAA slam the hard X rating on to Freidkin’s original, making it a limited release, or taken down before anyone could say “fisting”. 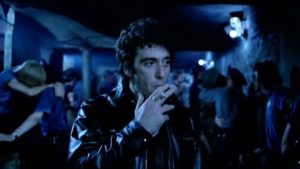 Friedkin’s Cruising begins with hardcore scenes of men going at each other in the most aggressive ways possible. The scenes are made even more unbearable to digest when the passive partner is craning his neck all the way back in ecstasy, wincing, moaning as five men climax on his person.
You get the picture. 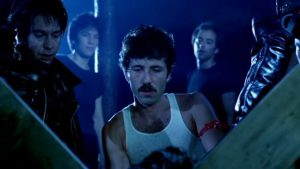 As synthesized Sitar music plays, the audience (almost reluctantly) follows Friedkin’s camera into the most seedy gay bars in the Village area of New York City. Cockpit, Rimrod amongst other extreme S&M clubs are visited by the young and old alike, however all have to abide by a code, an underground code, which could mean anything from a yellow handkerchief hanging from the back pocket to parties with themes where gay men dress up as cops or firemen and what have you.
Then the killings begin. Young men, hogtied and stabbed multiple times in the back. The killer’s M.O. is unknown, although his signature and prints are all over the place. 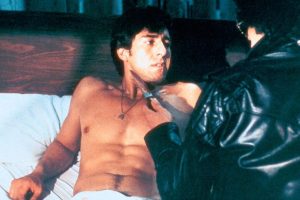 The film is highly homophobic and ambiguous, portraying the subculture as something more evil than Regan in The Exorcist, just that Regan had a filthy mouth, she was more verbal in her demonic histrionics; here we have all those things that Regan said, playing in front of our eyes. Just that mother is replaced by daddy being sodomised in hell. 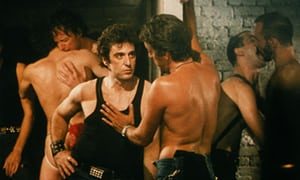 Speaking of homophobia, Friedkin (adapting from the novel Cruising by Gerald Walker) had purposely meant for the film to be such, at least until the fifty minute mark. He was sure he had something up his sleeve; ready to forestall the predicted allegations. Friedkin had no idea. This was the 1980’s and everything did NOT go anymore – well not with the censors.

Having bombarded us with gruelling and onerous scenes of extreme bondage for a major part of the 102 minute run-time, Friedkin makes a young actor stand behind a tainted glass door, waiting for his cue.
Paul Sorvino (Goodfellas, 1990) as Capt. Edelson answers to a knock on his door. In walks a relatively young (he was forty by then) and a baby-faced Al Pacino (the facial expression disappears in a few minutes). The film suddenly changes its tone, turns it down a few notches as the Captain explains to him his next assignment. It reminded me of Tony Leung from Infernal Affairs, 2002.
Beat cop Steve Burns (Pacino) resembles the victims and he is asked to don leather and go undercover. Evidently perturbed, the straight and courting the beautiful Karen Allen, Steve Burns accepts the job as a short cut to becoming Detective after the serial killer is in the cooler or dead. He is commissioned to the Meathanger district. 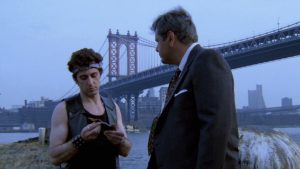 Pacino shows he’s still the man, even when surrounded by huge sadists and meek and grinning bitches, with loud punk music blaring from hidden speakers. In one of the scenes Burns is invited to a dance. Hesitant at first, we see this guy change character while dancing in the most awkward ways. His eyes change to John Milton‘s penetrating stare, he snarls, he laughs, with wide eyes and eventually loses himself and becomes a part of the underground. Although Burns is not shown having sex with a man (reducing the impact), the change of heart (or orientation) through extreme homophobia strains his relationship with his girl friend; heterosexual sex scenes that go all wild and misogynist or become completely non-stimulated. 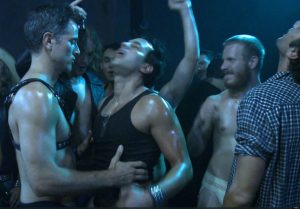 Is officer Burns divided? Is he having an affair with his roommate? Is the routine visual excess finally shaping his psyche? Is he becoming the underground?

Unfortunately all those questions go unanswered. Officer Burns mental progression comes to a halt (or so it seems). However Pacino does not stop (he never does, man). He makes sure that everything, from his body language to the embracing of a culture he was drawn to since the second time he visited Rimrod to the leather forage cap with an eagle badge on top of the band is executed with perfection. 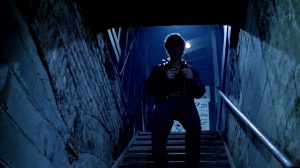 Disjointed, ambiguous and fiercely psychological in its presentation, Cruising suffers from giving just enough information to the viewers.

In hindsight, the film shows enough for the viewer to make definitive conclusions of their own. Burns distancing himself from his woman, the last murder, the long stare in to the bathroom mirror. It all adds up, now, after thirty seven years when the film is finally being appreciated for its prefiguration and the telling of the extreme underground licentiousness and intemperance in a pre-AIDS world. 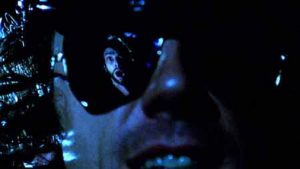 Friedkin directs his scenes and actors under a fabric of full blown homophobia that lurches at us from all sides. The cinematography is rather bright for a film this dark, however it goes a long way in showing us everything, fucking everything. Imagine Rectum (the club) from Irreversible and put the lights on. YIKES!

Nominated for three Razzies, panned by critics, hated by the audience and allotted an ‘X’ rating by the MPAA (until 40 minutes of the film were cut – and lost – bringing it down to an R) Cruising is a strange and an interdisciplinary display of show n’ tell, from a strange director who doesn’t hesitate to fire a gun on the set to get a reaction from his actors.

Minor SPOILER
____________________
It gets pretty uncomfortable watching Pacino buck naked and handcuffed to a bed, ready to be penetrated. Having said that Pacino did not take long to get back in to a slick suit, snorting copious amounts of snow white and shouting at his persecutors to “Say hello to my leetal frand.”

In the end, Pacino shines in a very exotic manner, almost disgusted by his own immersion in the awkward but highly intriguing and a fascinating and superbly acted and directed film by Mr. Exorcist himself. 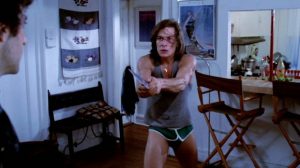 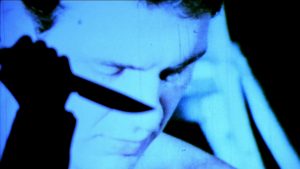 A must watch, if only to witness Pacino change characters in the open, during a dance sequence, and this is no Scent of a Woman. And Steve Burns is a 20/20 (normal visual acuity).

This was my contribution to the Gay Pride Month, but I guess Cruising, thankfully doesn’t fit the criteria – rather, on the contrary.