2015 saw her conquer her first interracial scene for Blacked.com. She was nominated for Female Performer of the Year at the 2016 AVNs, “Just Jillian” received five nominations. Her performance with Aidra Fox in Jules Jordan’s “Eye Contact,” earned Jillian her first AVN award for Best POV Sex Scene.

Well on her way to dominating the adult entertainment scene, Jillian recently turned her focus toward another goal and began feature dancing at top gentlemen’s clubs across the country. For her efforts, Jillian won Best Adult Star Feature Dancer at the 2016 NightMoves Awards. 2017 award nominations have highlighted Jillian’s talents with nods for Female Performer of the Year. She won Best Body at 2017 NightMoves Awards. 2018 see’s Jillian is honored with numerous nominations including Female Performer of The Year, Best Butt and Best Body. When she is not refining her flexible moves or industry know-how, Jillian can be found living her California dream with trips to the beach, dancing, visiting friends, and exhibiting her love for nudity and art. She also loves horror films and have been in a few horror films. Her must recent horror film is Femalien: Cosmic Crush. Jilian talks to us about her latest horror film and working with Full Moon Features. Below are some links for her and also watch the video interview below. Thank you: 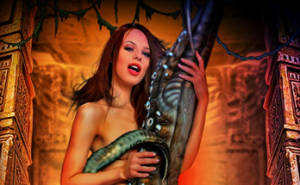