Today for our interview we have actor Fletcher Donovan.  He is very talented and hot. He has done quite a few things already in the world of film and tv. He has been in numerous TV series including: The Man in the High Castle, Supernatural, Unspeakable, A Million Little Things, Stephen King’s The Stand, and Firefly Lane. He is also known for his role as Chris it the short Itsy Bitsy Spider. Here is our interview with Fletcher Donovan: 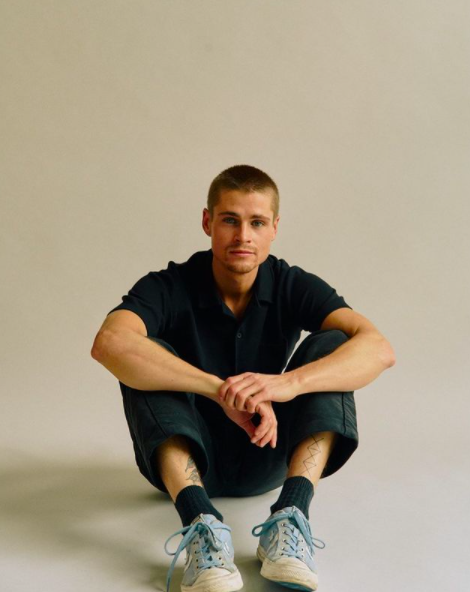 GRUEMONKEY: Sucks that covid stopped mostly all Halloween parties this year. Even though that happened, are you still going to dress up, and if so, what costume?

FLETCHER: Well, since these questions are being answered post-Halloween, (sadly) the answer is no. I love dressing up, but for whatever reason, it’s been a few years since I’ve rung in this spooky holiday in style. It’s funny, (again sadly) in a COVID world, I’d love nothing more than the excuse to dress up and have some fun. Perhaps I’ll do it alone in my apartment… sadly…(Laughs).

GRUEMONKEY: I love haunted Hayrides and houses. Have you gone to any yet?

FLETCHER: It’s been ages since I’ve been to a haunted house. Well, not that long. Three years to be exact. And of all places, it was in a massive mall in Jakarta, Indonesia. The answer? Yes, it was scary af. If you’re not familiar with South East Asian lore, I suggest you read up. It’s utterly terrifying stuff. And they lean all the way into that. 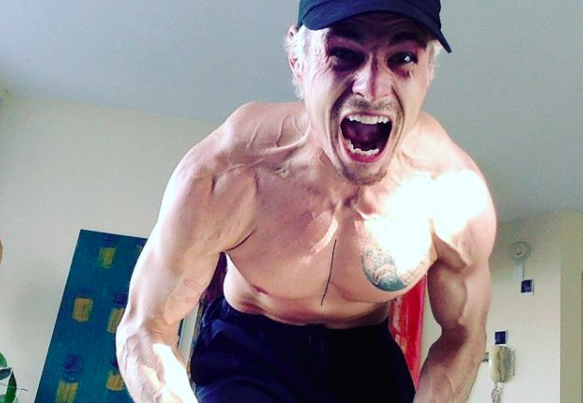 GRUEMONKEY: You were in a horror short called He Sees You. You play The Demon. What did you like best about playing The Demon?

FLETCHER: Well, I’d say first off, working with the writer/director Joel Brewster (a super old friend of mine) was what I liked most. Collaboration is magical. Working with our friends trying to make it in this backward industry is doubly so. I’d say second (even though three hours of makeup was a bummer) would be seeing myself transform through the makeup process. It blows my mind how a great artist can really help bring a character to life!

GRUEMONKEY: You were in a episode of the longest running horror series, Supernatural.  Tell us about your character Sleipnir and what it was like to work with that amazing cast?

FLETCHER: This role was so unbelievably fun. From the “Son of Don Cherry like” wardrobe to getting to do a lot of my own stunts, the whole experience was such a treat. I made lifelong friends, and the shows comradery was undeniably palpable. It’s always well received when you can walk onto a set and feel like you’re a part of the family. Everyone made sure I felt right at home. 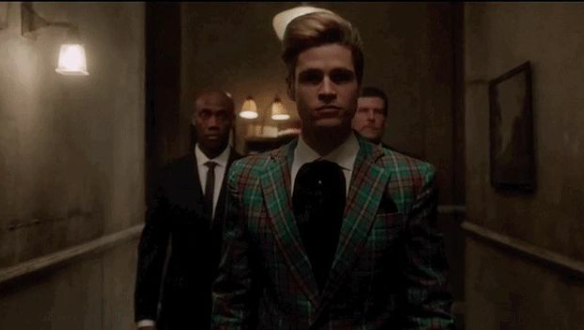 GRUEMONKEY: What characteristics do you share with Jared from Million Little Things?

FLETCHER: I’d say I identify with the wild side of this character. Though I am pretty reclusive and boring now, once upon a time, I was the life of the party. Or should I say, I thought I was. I played drums and so does Jared. I think the best way to answer this question would be to say, we are like the characters we play (albeit only a little sometimes) whether we like to admit it or not. I’m just a guy reading the words on the page. Is he human? Yes. Am I? I think so. The biggest disservice you can do to playing a character in a believable way is by condemning them, or finding reasons to say “ I wouldn’t do that”. I try to remember this. Always.

GRUEMONKEY: I’m a gay Male and love to see more and more LGBTQ Horror films and Horror shorts being made. Horror directors always tried to stare clear of doing Gay Horror. What are your thoughts on getting more Gay Horror or Gay films in general being made?

FLETCHER: Here’s my answer. Let’s all (as filmmakers) do better at telling the human experience- the story of our pain, our joy, our suffering, and everything in between. The LGBTQ community is irrefutably a part of this story. So let’s tell that damn story too! This gets me really fired up because we’ve built this machine that’s so effective and yet so lacking when it comes to inclusivity. Smarten up, filmmakers. Open your eyes and your hearts and tell the stories that need to be told. If you can’t, take a hike! 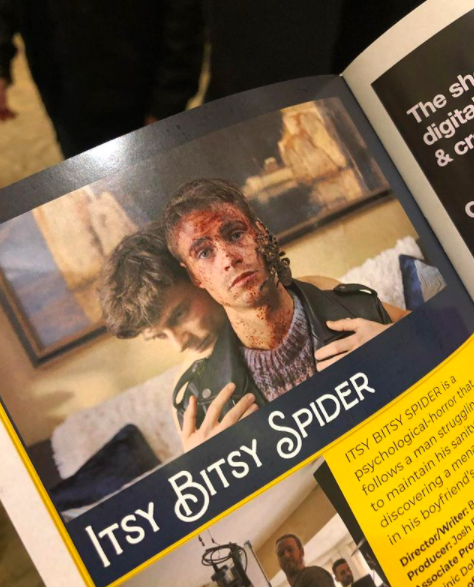 GRUEMONKEY: Can you tell us about Itsy Bitsy Spider and your character?

FLETCHER: Playing Chris in “Itsy Bitsy Spider” was such a special experience. From the amazing team behind the camera to sharing the set with my unbelievably talented castmate Thomas Nicholson, this was one for the books. As a pretty emotional guy, I’m about two red lights away from a total meltdown some days. Getting to express my insecurities (which we all have) through this character was an uplifting challenge – I’d like to think that shows up in the film.

FLETCHER: Thomas is an absolute gem. I’ve known Thomas for years as an audition acquaintance I’d like to call it. We would always read for the same parts and had a sort of unspoken respect for one another. Working together was a breeze as he was prepared, professional, and available every minute of the shoot. I’d like to think that under the best of circumstances, everyone is working to make one another’s jobs easier and more enjoyable. Thomas was no exception.  Keep your eyes out for that boy as he is an absolute titan in the industry. 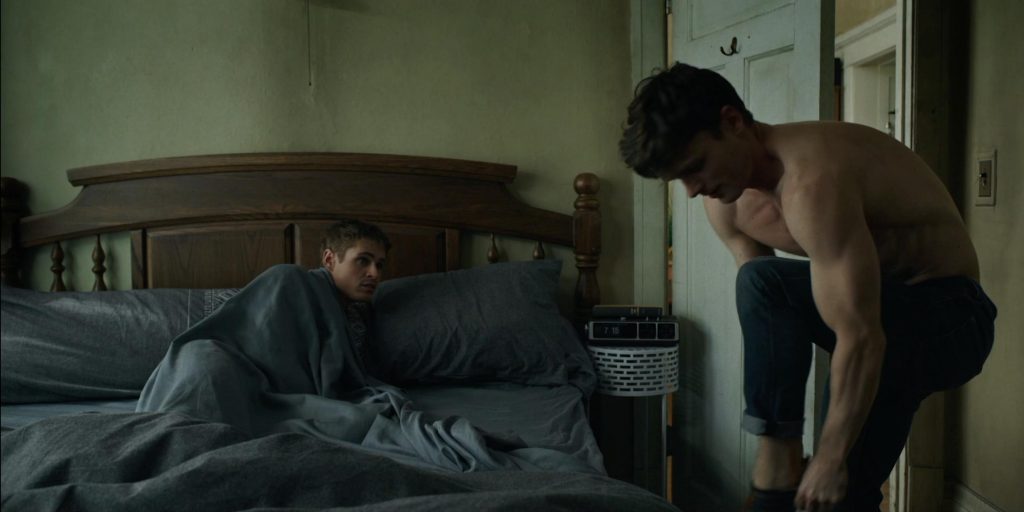 FLETCHER: Either going bananas on the spider in the tub or the final shot of the film with the massive spider on my face, all tied together with a single tear. That’s the kind of random moment that’s almost impossible to capture on camera.

GRUEMONKEY: You are also involved in a episode for a tv series based off of Stephen King, The Stand. Did you get to work with any of the big name Celebrities in the series?

FLETCHER: I did. But I don’t kiss and tell. All jokes aside, I was there to support the story. I was a blip in an episode. Fun show though! 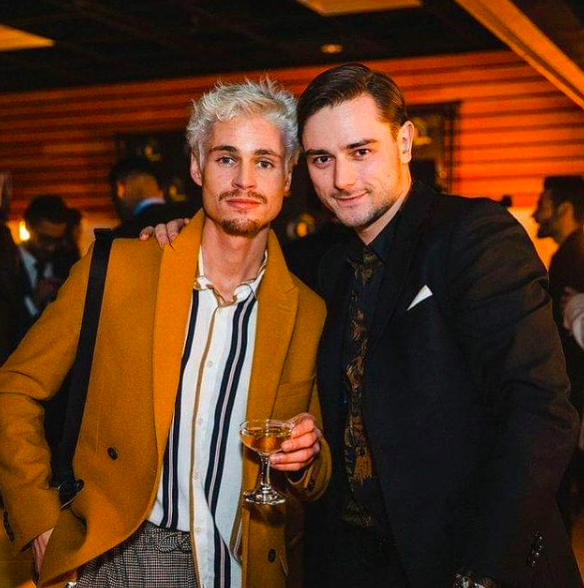 FLETCHER: Oh yes, the braggadocious promotional material. Well, in December this year, you can catch me in an episode of a new Netflix show, Firefly Lane – starring Katherine Heigl and Sarah Chalke. I can’t give anything away, but I can assure you my character is loads of fun. I’ve been shooting another Netflix movie for the last two months, and I cannot wait for the moment I can spill the beans. It’s a great role, that’s all throughout the film, and it’s been such a blessing having the chance to work during these troubling times. At the end of the month, I start shooting as the lead in a new tv pilot that’s got a good ol spooky tone to it. All I can say is stay tuned to my social media for when I get to drop the bomb on these fun projects slated for release in 2021.

FLETCHER: Back of an old Ford Taurus station wagon. Boring… I know.