Award-winning visual effects artist Michael Zaiko Hall’s directorial debut Carrion will officially be released by Gravitas Ventures in March 2020 – after Gravitas came to terms with sales agency Cyfuno Ventures, who represented the film. The deal was negotiated by Nick Royak of Gravitas and John Lepper of Cyfuno.

Carrion is throwback midnight movie with surrealistic undertones. It tells the tale of a young woman who shows up on her cousin’s doorstep after a ten year absence. As dark events from the past resurface, someone in the woods follows their every move. 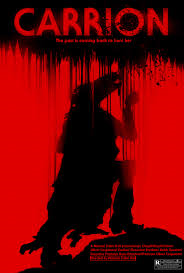 His mind is the scene of the crime. MONOCHROME Starring Game of Thrones’ James Cosmo!!