Andrew E interviews Pascal Arquimedes (The Skin of The Teeth) 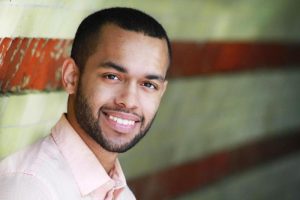 Gruemonkey’s Andrew E sat down for a chat with Pascal Arquimedes the leading actor of the new psychological thriller movie ‘The Skin of The Teeth’. Gruemonkey was lucky enough to have an exclusive screener of the film – Check out the review HERE.
Let’s begin…
Andrew E: Can you tell me about “The Skin of The Teeth” and your character within it?
Pascal A:  So, “The Skin of The Teeth” is a date night that goes completely awry and becomes a psychological thriller in an isolated interrogation room- in which it becomes very difficult to differentiate reality vs what Josef is experiencing after he takes a few too many psycho-active pills. Josef is quirky, eccentric and goes through unconventional means to get high; going on a date, finding the date’s stash of pills, and then wanting to leave the date after he takes the pills as seen in the first part of the movie.
Andrew E: It looked like a fun shoot, what was the hardest bit about filming?
Pascal A: It was super fun to shoot but the most unpleasant collective experience of the shoot was being stuck in that interrogation room with no A/C at the peak of Summer, it was a literal sauna in there but we made it through in one piece without anyone suffering a heat stroke! 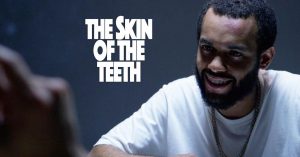 Andrew E: Horror/thriller films can often have some intense things to film, unlike other genres and your character goes through one hell of a trip – were there any elements that you struggled with emotionally?
Pascal A: Personally, I’ve never done drugs nor do I drink alcohol so finding that emotional range/flow while Josef is being affected by the pills took a bit of exploration and specific direction from Mathew Wollin, the Director to be able to convey the character’s truth in those moments. So after I was able to tune into that facet Josef, we cruised along from there thankfully.
Andrew E: Can you tell us any behind the scenes moments from ‘The Skin of the Teeth’ that were fun?
Pascal A: During the first part of the movie, where Josef and John, played by the fantastic actor Donal Brophy, were eating and sipping on wine (which was cranberry juice just in case some folks think I went method for this role haha), I all of a sudden started to get a sugar rush off the cranberry juice after a few takes and after we were wrapped with that scene, I crashed soooooooo hard that the cast and crew thought I was suffering from dehydration or fatigue but everything went back to normal after drinking at least 5 gallons of water.
Andrew E: I thought you were the strongest actor in the movie, you really shined – How do you prepare for a role? 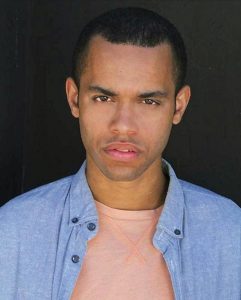 Pascal A: Thank you so so much! Usually, I try to find a happy medium between me and the character, and then I work on all of the preceding circumstances for my character to drop myself into the imaginary world of the text and justify every moment of text emotionally so when I get to set on the day of shooting, I’m not thinking about the script or the homework- I’m all set on changing my scene partner and telling the story!
Andrew E: Would you pursue more work in a horror /thriller type film?
Pascal A: Yes, as long as there’s a compelling story being told, I wouldn’t mind keeping audiences on edge in the horror/thriller genre of film.
Andrew E: Did you feel a responsibility being one of the lead roles?
Pascal A: Most definitely, I knew I had to stay consistent every time I was on camera since we would shoot scenes out of order and my choices needed to be clear or else there was a chance that the story wasn’t going to be told in the most truthful way in those moments. My job was to take direction and tell this story and grateful that I was able to do both on such a story time frame- 13 days of shooting to be specific.
Andrew E: Tell us something random about you, that others won’t know?
Pascal A: I always wanted to be a paleontologist when I grew up, but now I’m an actor which is what I’ll always be and I still love dinosaurs so I have the best of both worlds.
Andrew E: What is next for you, where can we see you next?
Pascal A: In the upcoming months, you can catch me in the short films “I.C.U.”, “Blight” and “Shadow Man” when they make their festival runs! 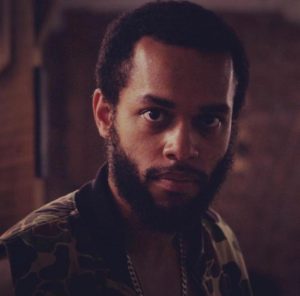 Andrew E: There were some quite sensual moments, were they difficult to film?
Pascal A: They were nowhere near difficult to film since we were all professionals and we took care of each other and made each other feel safe during every step of the film making the process- it was an amazing experience through and through.
Quickfire round:
Andrew E: What is your favorite scary movie?
Pascal A: Hereditary.
Andrew E: What is your biggest fear?
Pascal A: Waking up with a jumping spider or black widow laying on my chest waiting to attack.
Andrew E: Ever experienced anything paranormal?
Pascal A: Yesss and it’s strange, the things we thought doing exist might actually do.
Andrew E: If you could film a role in an existing horror franchise who would you battle with?
Pascal A: I’d gladly battle with Daniel Kaluuya or Lupita Nyong’O if they ever come back for Jordan Peele’s future works in horror.