In Memory of the Godfather: The Herschell Gordon Lewis Interview

Editor’s Note – This interview was originally published on Gruemonkey August 25, 2015. Less then a year later, Mr. Lewis passed away. He was kind enough to grant a then brand new site with a small audience an interview. True to his root’s, he was supporter of the little man, even after becoming a horror legend. We at Grue want to say thank you to the Godfather of Gore, not only for doing this interview, but for giving us great films and helping to further the genre. You will be missed my friend, but never forgotten. rest in peace.

We repost this interview in memory to him. Enjoy.

Today I’m super proud to present a VERY special guest. A man who is an icon in the world of horror. The Godfather of Gore himself. The legend known for: Taste of Blood, Wizard of Gore, Color me Blood, The Gore Girls, Two Thousand Maniacs, The Uh Oh Show, and of course Blood Feast 1 and 2, and now Herschell Gordon Lewis’s BloodMania.
This is the man that super kicked the door open for gore in horror. An inspiration to many filmmakers including Sam Raimi, Lloyd Kaufman, Eli Roth, and many many others. Grue-ling’s please welcome the Godfather himself, Mr. Herschell Gordon Lewis!!!!!!! 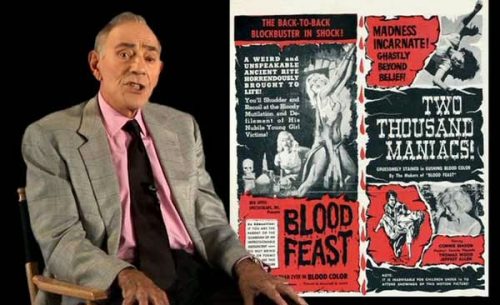 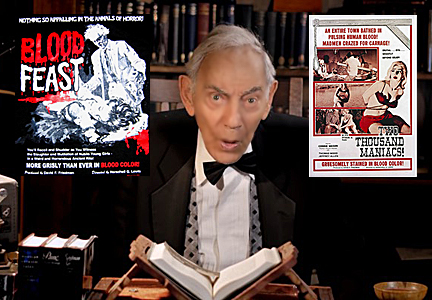 Hellter: Thank you Mr Lewis for stopping by, it’s a true honor sir!

HGL: Thank you for having me.

Hellter: Are you kidding? We’re HUGE fan’s! Speaking of which; how do you feel knowing that all the films you made are still loved now by a new generation of fans?

HGL: I feel justified at having taken a risk all those years ago, based on the assumption that others would share my view of their entertainment value. 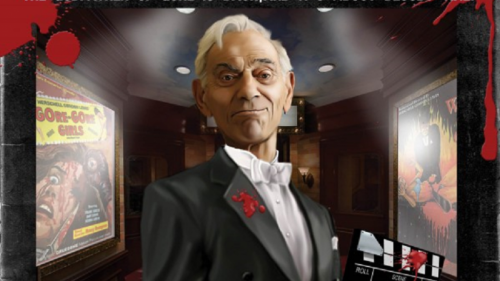 Hellter: I know I do! I hear you have a new film on the way called Bloodmania?

HGL: The full title is Herschell Gordon Lewis’s BloodMania, and it advances the genre another step. We shot it in Canada, with a cast and crew that equals or surpasses any I’ve ever worked with.

Hellter: Sound’s great! Good to have you back sir as, and I’m sure I’m speaking for many, we’ve sorely missed your films. But you’ve stayed busy, You’ve written many books on internet marketing tips, tricks, and tactics? Great read and very informative by the way. Why that topic though?

HGL: Both my education and my professional position are centered in the world of marketing. Even when my films were at their zenith I maintained a separate “career,” and that continues to this day. 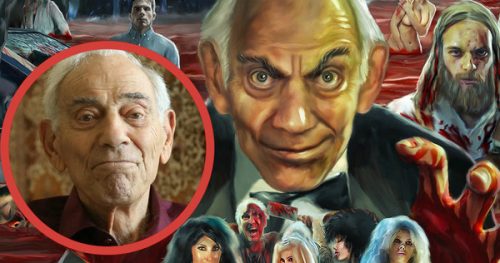 Hellter: Yeah, I was taught to always maintain a back up. What made you want to become a director anyway?

HGL: That’s an impossible question. I didn’t “want to become a director”; rather, I decided that I was best qualified to judge the pace and the impact of scenes for movies with which I had a major creative role.

Hellter: Are there any horror directors whose the godfather enjoy’s?

HGL: That’s competitive question, and I prefer not to answer it. 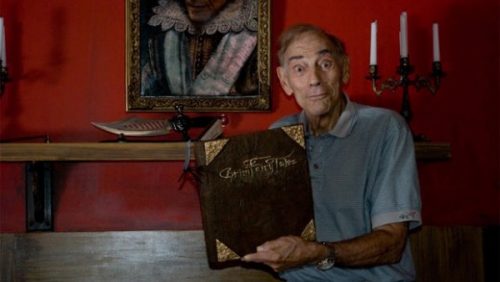 Hellter: I understand. Very cool and respectful of you. You’ve done the Horror convention circuit a bit, any thought’s on them?

HGL: I’m in favor of them, for broadening the appreciation-base. Obviously, these events display widely diverse levels of professionalism.

Hellter: Yeah, and this genre never get’s enough appreciation. Shifting gears,what’s the most challenging project you have taken on?

HGL: I’m guessing it’s a negotiation currently under way, in which producer James Saito and I would launch a production company in Canada, churning out an ongoing schedule of exploitation films.

Hellter: Your films Blood Feast 1 and 2 changed the world of horror. When concieving them, did you think they’d have that kind of impact?

HGL: No. Then first Blood Feast was purely experimental, and I still marvel at the impact that inexpensive little bauble had on the entire industry.
Hellter: With films like Blood Feast, Two Thousand Maniacs, etc., Did you realize you were creating a new element in horror, the idea of Gore?

HGL: Yes. It was a gamble, mine alone to enjoy or to mourn. 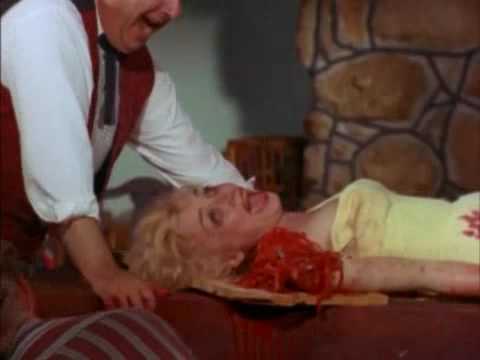 Hellter:  I think I and many others enjoy it as well. What made you decide to take such a gamble. What attracted you to Gore??

HGL: Nobody else was making movies that went far beyond accepted extremes. I knew that some theatres might risk showing this type of film, and some adventurous theatergoers might risk paying to see it. The question was whether enough of such people existed to make my guesswork viable.

Hellter: In this sick world?
Ok, so I gotta ask, even though I know this is a hard question for a director. What is your favorite horror film you did? 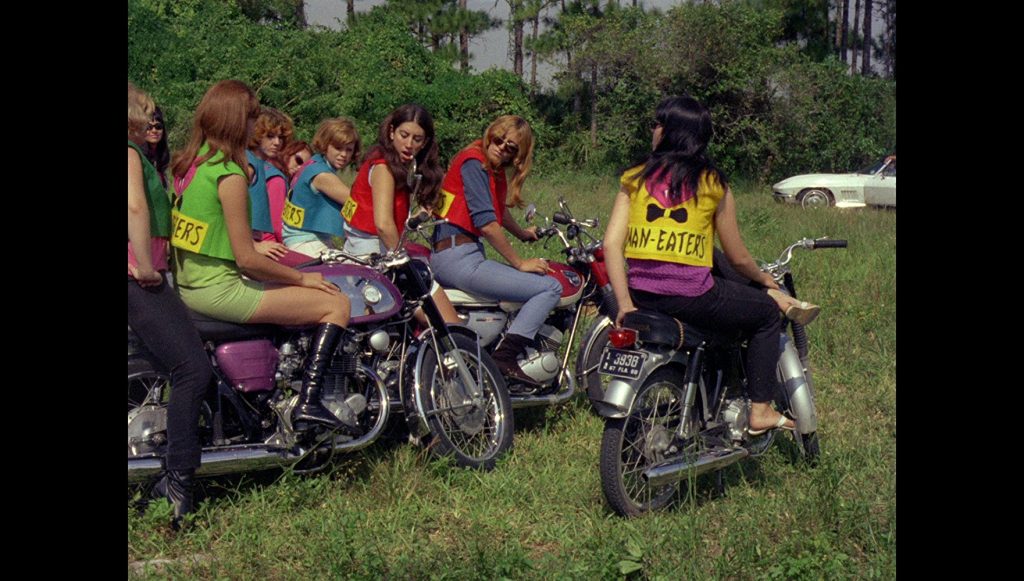 Hellter:  Do you think She Devils on Wheels could be described as a feminist film?

HGL: Fascinating question. I salute you for thinking of it. Positively yes.

Hellter: Did the Godfather just…..ahem….Thank you for the kind words sir. I heard you didn’t take crap from you’re actor’s. Is that true?

HGL: It’s true if you mean actors whose egos are far bigger than their talent. It’s not true of the cooperative and dedicated professionals with whom I regularly work.

Hellter: You shot Linda and Abilene at Spahn Ranch, home of the famous Manson Family. How did that happen?

HGL: A local contact booked the location. Neither he nor I knew who would be lurking there.

Hellter: Wow! Freaky!
So, you had been a way for awhile from film making, what made you decide to do Blood Feast 2 in 2002?

HGL: A producer named Jackie Morgan had assembled script, cast, crew, and financing. I said yes, as I would do today when presented with a “ready to go” project. 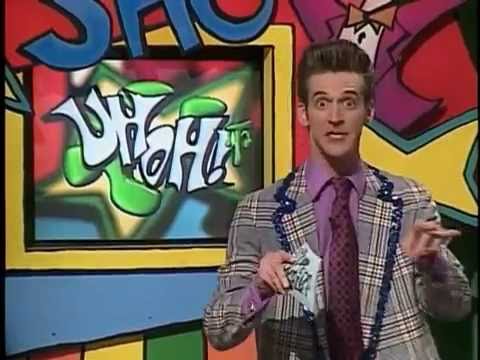 HGL: It’s a gory satire. Screen it and you’ll have a worthwhile answer to that question.

Hellter: Roger that! What do you use for blood in your films and are you against CGI Blood?

HGL: I’m, not against CGI and use it where it’s logical. CGI has no relationship with blood. We’ve developed a stage blood that looks real and washes out. What a bonanza! 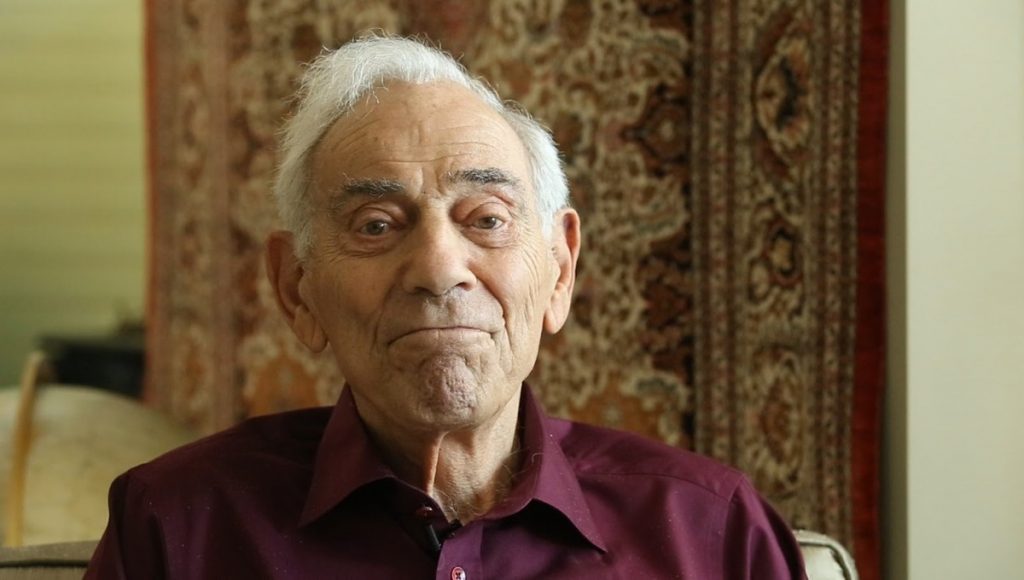 Hellter: Can’t beat old school! Has any horror film scared you or made an impact on your life?

HGL: Not since I was an infant, if then.

Hellter: Nice! Anything you would like the fan’s to know sir?

HGL: If you or anyone wants me to direct a movie, I’m interested … but not if the money to bring the project to life doesn’t exist: Been there, done that.

Hellter: Thank you so much sir for being a guest on Gruemonkey.com. Its such a honor to interview a huge Icon in the horror world!!!!